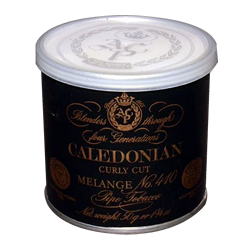 A deluxe blend of choice tobaccos such as Louisiana perique and golden Virginias. Spun together, carefully pressed, and then hand cut.

Notes: It went out of production as a factory blend in the early nineties, but is still available through A&C Petersen's "My Own Blend". Ask for "#410" or "Black Caledonian"

The review is based on a 1980 sample. The gold Virginias are lightly grassy and earthy with a little citrus, but the blending process also caused a deep fermented tangy dark stewed fruit sweetness that dominates the citrus. The perique is fairly spicy with a fermented raisin, fig and date taste, and is obvious in every puff. There may be a light topping, but aging has confused the issue, so I can’t claim there was one. The nic-hit is right in the middle of mild to medium. The tobacco is a little moist, but I did not dry it. It burns at a slow to moderate pace, cool, clean, relative smooth with a very consistent flavor and requires a few relights. Leaves a little moisture in the bowl, but not enough to interfere with the experience. Won’t bite even if pushed and has no harsh or dull spots. Has a pleasantly lingering spicy sweet aftertaste. Three and a half stars.

Early 1990's tin - not a flat tin but like a GLP tin. This was the black label. Tin nose is fruity to the extreme! I think they put some sort of fruity topping on top of the fruity perique. But it works! How, I don't know.

Jet black spun-cut tobacco, too wet to smoke out of the tin. But it's a virginia moisture rather than a sauce. An hours drying time and I was ready to go. The flavor is deep, deep deep! This hits me with a depth that reminded me of the depth of Gallahers Rich Dark Honeydew. It seems to transcend most VaPers in that regard. I'd put old Escudo close to this. Deep but congenial, never harsh. And complex? Highly! The topping burned off about halfway down and this blend took on a whole new dimension. Flavors of various fruits as well as a kind of briny white meat like lamb emerged. Spicy and sweet, but not too much of either. Just an excellent VaPer. Reminded me of why I liked it so much decades ago. If a Vaper wants to go the fruity direction, this is the one. The opposite end of the spectrum is the salty and peppery style of GLP's Telegraph Hill. Both are excellent, albeit different.

If you can find this, buy it and smoke it if you enjoy Vapers with a twist. This one will twist your night away. Highly and hugely recommended!

I first discovered this delightful blend back in the mid-1980s, when it hooked me from the very first whiff of the freshly opened tin. The Virginias, the fruity perique, and some light but entrancing topping came together to make this a wonderful experience. Plus, they were curlies!

In January 2007 I opened a tin I'd found on eBay. It's hard to know exactly how old this particular tin was -- I believe Petersen stopping selling a tinned version of this blend back in the late-80s/early-90s -- but the aroma was identical to a brand-new tin off the production line. Even though the original light and fluffy character of the curlies had become a bit drier and darker, the loosely spun discs (dime-size, not half-dollar) appeared to be in good shape. I gave them about 24 hours in a jar with a humidrole before I dug in and. . . cautiously, warily. . . revisited a tobacco that had once made a very strong and positive impression on me.

In the intervening years, I've realized I'm particularly sensitive to perique, so I was anxious about how this blend would fare with me today. Happily, the perique is present in perfect proportions for me. It likely won't impress the perique fanatic, but it also won't send the rest of us to the floor. (I do recommend a smaller pipe, though, if you're wary.)

The smoke was luscious and the flavor tangy, spicy, sweet. This isn't a daily meat-and-potatoes kind of tobacco, but it's delicious as an occasional dessert. If you can find a tin lurking in a friend's cellar, up for sale on eBay, or covered in dust in the back of a forgotten tobacco shop, I think this one is worth discovering -- even if you never have the chance for a second tin.

I absolutely loved No. 410. It is in my top five all time favorite VaPer blends. The way A&C processes Virginia with the extra steaming, is something that I find myself to be a big fan of. Combine the effect with Perique and its chow time for my pipes!

If you can find an old tin of this, jump all over it and then you can thank me after smoking it. (-:

I never got to try the tinned version: Black Caledonian. It went off the market before I chose to smoke a pipe.

Available as bulk from "My Own Blend", i bought some, since I had read a promising review of the tin version in Danish literature.

That, my friends, was a mistake. It does have a nice topping, which is quite similar to that used in Singleton from Orlik Tobacco Company, but it will bite like nothing else.

Even MacBaren cannot keep up when talking "BlisterFactor". If Virginia No. 1 is 13 on the BF-scale, this baby would probably top 1000.000 on the same.

Similar leaf that will not dismember your face: New Ripples from Orlik. Go there instead..

In three words … Magnificent and Sublime!

My well-aged tin from 1992 of Caledonian Malange No.410 is by far, one of the best-aged VaPers that I have had the pleasure of smoking. Even with this much age, the perique plays a subtle role with a nice fig/raisin flavor that shows itself gently as the silky smooth, light grassy Virginia carries the main tune.

I’m halfway through my tin and save it for special occasions when I can relax and pay attention. If you are fortunate enough to find one of these elusive tins, don’t hesitate to make the purchase … you will be glad that you did!

This tobacco is medium-bodied, complex, darkly fruity and possesses a wine-like florality that taken together produce a high note of subjective flavor that I term "ambrosia," a summed delicate and succulent intermixing of sub-flavors that few tobaccos achieve. Cumberland as well as 3Nuns Version II achieve it; few other tobaccos do. Thus for me the applicability of the term ambrosia is purely subjective.

The Perique does not get lost in these flavors, adding a peppery edge to each puff. Some compare the taste of Perique to stewed fruit; I definitely do not taste this in this blend; Escudo, however, comes to mind as a blend whose Perique has that fruity flavor.

As regards the aging of this tobacco and what beneficial changes time has wrought, I am at a disadvantage as I haven?t smoked it in its youth and thus have no yardstick against which to compare. If I were to highlight any change it would be that the florality has a wine-like, fermented character perhaps wrought by aging.

?Caledonian? refers to Scotland, Scots, etc. I?m sure the blenders chose it meaningfully, yet I have smoked so little of Scottish blends that I would not know how to apply it to this blend. Some blends with Scottish in their name have Latakia, namely McConnell?s Scottish Mixture, yet its Scottish Cake and Scottish Flake do not. My best guess is that it is the dark flavor of this blend to which Calendonian applies.

Anyone who has smoked 3Nuns Version II can attest to the essence of its full-bodied florality?a truly sumptuous tobacco. To me it is a toss-up as regards which blend has the better flavor, but the Caledonian Curlies are the clear winner in terms of complexity?s layers of tastes. These Curlies? complexity unfolds in the truest sense of the term, much as it does in a fine English blend such as Renaissance. Take one puff and fruitiness is more evident while the next puff reverts to the wine-like florality?a true layering of flavor.

The best curly cut VA/Per I've had the pleasure to smoke.