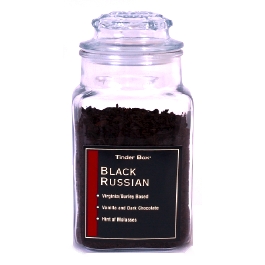 Very rich and aromatic...a perfect desert tobacco. Creamy vanilla and dark chocolate flavorings with molasses added for smoothness upon light up and throughout smoking.

Wow. Have been smoking for 40 years. I ran out on a trip, and my friend that we were visiting with said, try mine. Well, I backed up a little bit, but said I would. WOW, I loved this stuff. Have been smoking Captain Black ( different ones ). This was great. Excellent taste, NO bite, lots of smoke, room note was great. Even my clothes did not smell after smoking. ( wife loved that ). About the best tobacco. Drove 40 miles out of my way to get some before we left. Then found a Tinderbox when I got home. Just the best stuff.

A typical cavendish blend, slightly moist with a lot of topping. In the past when I am smoking an aromatic and want something with a lot of sweet flavor, I reach for this or Blue Note. The "creamy vanilla, chocolate, and molasses" flavorings make up a super sweet, almost caramel like flavor and scent that lasts throughout the bowl. I highly recommend this blend only to those that like heavy aromatics, this is not for someone who wants a lot of tobacco taste with a little topping in the background. This blend did not bite, turn goopy, or stain the pipe with its topping flavors...

4.5 out of 5 stars in the category of desert tobacco

This tobacco smells great in the bag and has a pretty pleasant room note. The tobacco taste similar to the way it smells, in my opinion. During the smoke I usually do have to relight this tobacco a few times. Unlike some of the other reviewers I have never experienced tongue bite while smoking, although the tobacco does burn somewhat hot. I have had a one ounce bag of this stuff for about 3 weeks now and it's still fairly moist. Decent tobacco that's worth a try.

My Fiance loves this aroma. Need I say more?? It smokes like a typical aromatic but not as moist as some. Perhaps a little drying time and careful puffing will do the trick.

The pouch flavor is very nice. I got this in the 4 pack sampler. The smell and taste are very nice. I dried this out for 7 hours on a paper napkin first as it seemed fairly moist. 1 match to lit and that was it. Big clouds of smoke. Cleanup showed a fairly wet bowl afterwards.

The smell in the pouch was of chocolate covered cherries, even though there is no cherry topping here, that was the smell I got. Once lit it tasted like coffee liquer and chocolate, rather pleasant.

Black Russian smoked well and did not disappoint, but it is rather one sided, coffee flavor all the way down with no real tobacco taste underneath. Recommended for those who enjoy sweet aromatics and aren't looking for much in the way of tobacco leaf flavor.

On a recent trip to California I had the chance to stop at the Tinderbox, the last time I had the chance to was back in 2007 when Tinderbox was still open in Las Vegas. I had smoked Black Russian back then and had not had the chance to since then but I sure remembered it when I stuck my head in the jar, the Molasses aroma is very unique and once you inhale it you will not forget it. My mother (who hates smoke) actually said it smelled very nice (which is the highest compliment she can give on tobacco and remarked that I should stop smoking the other "Crap" around her.... BR is your classic Black Cavendish with a Vanilla /Chocolate topping ala RLP-6 or Captain Black White but the addition of the molasses really makes it unique and adds a creaminess without upping the sweetness so it's a very rich blend that's perfect for dessert after a large dinner. One must dry BR out for awhile to reduce relights and muck accumulation but IMO it's worth the added inconvenience. I really enjoy this blend, even more so when substituting 1/4 of it with a strong burley.

Great tobacco among the aromatic class. Tobacco has a nice dark look, with some chocolate, molasses aroma. Like was stated, a slight hint of vanilla thought not too much. Smokes nicely, nice bit of tastiness here and there. Very pleasant to smoke, unfortunately I have finished the three ounces over a month ago, so the exactness isn't in my mind.

I never had to relight, nor did it bite the tongue. Nice casual pace, steady as she goes and this goes down to ash. Gotta dump out the ashes though, they tend to kill the pot. Great ARO, I do miss it in my rotation, and will pick up more than the three ounces next time around.

Upon opening the pouch, it smells of chocolate. The room notes are very nice with a small of vanilla. The taste however, is hard to enjoy with the large amount of bite this tobacco produces. Requires a number of lights to keep lit and not much payoff. I bought 1/2-pound, but I tend to skip it in my rotation.

First, let me state that I smoke mostly aromatics and bought this one solely by the smell (bought bulk). And to add, I had not been smoking that long at the time and really would still consider myself a beginner as far as taste bud development goes...

As I said it smells wonderful. A sweet molasses smell with (IMO) hints of chocolate. Can't say I could detect much vanilla.

As far as smoke goes, like any other aromatic, this puppy can get hot, and be prepared for a relight. A tasty tobacco if you stay relaxed and smoke it slowly. I enjoyed the taste of the cavendish (molasses and chocolate), and as others have said, you might even be able to catch some vanilla or coffee notes.

If I could rate in halves, I would give this 2 and a half stars.

This came in a boxed set with 3 other Tinderbox aromatics I bought in 2004. In the pouch it smells yummy, chocolate and a hint of vanilla. In the pipe, however, it lost it all for me. Like others have stated, I experienced more bite than flavor. Also had something in the background a bit metallic-like, although it could be that this didn't age well.

I love all pipe tobaccos whether they be aromatic, non aromatic ,or English.... as long as they are good. THis tobacco scalded my tongue within 30 seconds of smoking it. I could not taste a thing as I could not get past the tongue bite. Take a pass.

I'm not a tremendous fan of aromatics, generally speaking, and wouldn't have bought this but for the "prompting" of my better half.

That said, Black Russian offers a surprisingly nice smoking experience in my opinion. The aroma of the leaf to me was of chocolate with a hint of vanilla. When smoked, the tobacco itself seemed to have little body but the room note was pleasing. Maybe it was just a Twilight Zone moment, but this blend actually burned all the way to the bottom with only one relight.

Occasionally, there was the hint of a sweet aftertaste that I did not find altogether pleasant and it did have a mild bite. Otherwise a good, clean burning, crowd pleasing smoke.