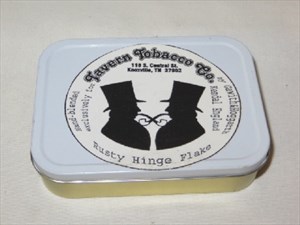 The "good ol' boys" from the Tennessee hills know how to have a good time and live life to its fullest. They enjoy good music, partial to the Nashville Sound, huntin', fishin', car racing and pretty women. But they also enjoy a pipe filled with good tobacco while enjoying a cold beverage at their favorite joint, The Rusty Hinge Bar and Grille. The old fella who runs the Rusty Hinge came up with this blend back in the days when Hank was king of the jukebox. It's been a house favorite ever since! An all day Virginia/perique with just the right amount of spicy Louisiana perique.

The various Virginias provide tart and tangy citrus, tangy dark fruit, earth, wood, bread, some grass, vegetation, floralness and slight acidity along with a pinch of spice. They are the lead components. The earthy, woody, spicy perique also offers stewed raisins, figs, dates, and plums as a secondary player. There’s a floral topping that very lightly tones down the tobaccos, and works with a similar quality from the Virginias to help create a very consistent sweet and mildly spicy, floral, rich flavor that translates to the pleasantly lingering after taste, and room note. The strength and taste levels are medium. The nic-hit is a couple of steps behind that mark. No chance of bite, but it does have a few rough edges. May need a light dry time, though I did not do that. Burns cool, clean and a little slow as broken flakes always do. Leaves little moisture in the bowl, and requires some relights. Not quite an all day smoke, but it is repeatable. Another repackaged G&H blend.

Another very nice Gawith & Hoggarth made offering under the Tavern Tobacco Name, Rusty Hinge Flake was tinned and offered as a stronger Virginia/Perique. This one had the somewhat floral scent sometimes associated with Lakelands and the quality, special processing and smoothness was readily detected in the Virginia. The Perique was used as an enhancer rather than a star player. Unfortunately, I only had 5 tins to begin with and am now down to 2. I am trying to be frugal with this one. (-;

The now defunct Tavern Tobacco had a number of blends that were repackaged mass marketed blends that were renamed for Tavern. As an example, Tavern’s Laurel Flake was actually Samuel Gawith’s St. James Flake (I confirmed this directly from SG). Rusty Hinge Flake was made by Gawith Hoggarth, and having smoked two tins of it, my best guess would be that this is Gawith Hoggarth’s Louisiana Flake. My tins were purchased from 2005. Father time had treated this blend well. Now well aged, Rusty Hinge Flake offers little to no flavor that would be common to Lakeland style blends. While there is some sugar crystals visible on the flakes, I don’t find this to be as sweet as a ten year old Laurel Flake. RHF is very smooth and the flavor is straight forward offering little complexity. With that said, the harmony of the component tobaccos is really well done. RHF doesn’t bite, even when pushed. The subtle sweetness adds to the blend’s appeal. I broke the flakes up into smaller pieces with a little fully rubbed out at the top of the bowl. I got the best flavor by smoking this blend in a cob.

Another of my trials from Knox Cigar in TN but this one is only available from them tinned. The dark flakes were partially rubbed out and as with others in this line, moister than my ideal when the tin was opened. Based on my prior experiences, I believe some drying improved the lighting and burning rate and no relights were usually needed and a cool smoke resulted. This blend is made by G & H but I found no soapy, Lakeland taste. They kicked the Perique up a notch from their Samuel Gawith blended Laurel Flake to the point that the VA influence is hardly evident. "Just the right amount" as indicated in their description is relative to the smoker. Although not a strong tobacco, I found this blend too heavy with Perique for an all day smoke and greater than McClelland 2015 which remains one of my favorites of this group along with Caledonian 499 and Reiner's Long Golden.

This tobacco is similar to GLP's Stonehenge, so if you liked Stonehenge, you will likely dig Rusty Hinge. It's not a dead ringer, but certainly in the same ballpark. I like this tobacco quite a bit, but the earlier comment about letting it dry out for a time before smoking it is accurate. My only complaint is that the good folks at Knoxville should take the time to put a label on each tin, even if you buy it in bulk to get the discount. Otherwise, you get plain white tins.

I picked some of this stuff up at the Kansas City show and must say it's not to bad. Not as sophisticated as 633, Escudo, or LGF, then again I'm not sure it was ever meant to be. This is a simple, straight forward flake that kind of reminds me a bit of a cross between Haddo's (stronger) and 2015 (weaker). Perhaps not polished, but nonetheless very tasty and good with a cold beer. Curiously this was offered along with some other new blends, most noticeably a tonquin flavored Va flake by Samuel Gawith known as Grey Man Flake. For some reason however I can't find it on the Knox website, nor any other for that matter. Perhaps the best of the new tobaccos I have tried lately, try it if you can find it.

Another fine tobacco from the Tavern label. Tasty broken flakes that packed easily, needing very little dry time for an smooth smoke. I thought there was a whiff of a topping such as chocolate (though very, very mild). Whatever it is, my tin was quickly smoked and thoroughly enjoyed. I found the Perique to be blended nicely with the Virginias.