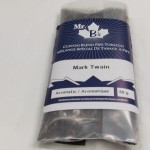 This blend has been developed from selected choice tobaccos with an even cut. The different flavours give the blend a striking rich aroma. A perfect blend, with super taste and no bite, for the appreciative pipe smoker.

Who can pass up a blend named Mark Twain? When I received the pouch I was impressed with the artistic design. The tobacco, not so much... a broken Virginia flake bulked up by black cavendish that I think had something extra misted on it but I could be wrong. Light, airy and not a great deal of flavor. It had a really nice advantage for those who get a little nip from Virginia leaf, the processing left this one biteless.

Maple and maybe a bit of anise over a typical Danish/American aromatic on a Black Cavendish/Burley base.

First pipes of this stuff you think "Wow, that's a keeper." Sweet and rich and easy to smoke. By halfway through the bag, I was done with it. Similar experience for a friend of mine.

Nice intro to pipe smoking - something like the Backwoods cigars when they first came out.

This tobacco is not bad, it haves a very good room note and evolves a creamy smoke , but... is only this... The flavour is very weak and also it is almost tasteless. a Common, not remarkable Virginia-Cavendish.

I've smoked about 45g of this blend and I still can't tell you what it is. It packs great, smokes well, sinks down the bowl most cooperatively and ends up in a nice pile of ashes in your ashtray when done. No tongue bite, subtle changes in flavour throughout the bowl. Definately like a Danish aromatic. This was just a good, no- nonsense straightforward and enjoyable bowl of tobacco.

Recommended at least once to try out!

A nice sweet aromatic pipe tobacco. Someone told me it smells the way that a pipe should smell when they were walking by. People around me like the smell of the smoke. I enjoyed the pouch I bought. Not much of an after taste left in my mouth after which was nice.

Initially I really enjoyed this blend. However, second time I went to purchase this, to re-visit my pleasure found myself let down. I of course had this as a beginner at first, so my second time it didn't taste as good. Nice and sweet, good flavor, but I find I cannot smoke it too often. I like to keep some handy in case I am going somewhere or just in the mood for a mild smoke, other then that I would not jump to get it.

Recommended by a friend, Mark Twain is on the more aromatic side of tobacco(as opposed to an English blend) that I found it a bit ho-hum initially. Over time the smoking qualities improved.

Several pouches later it become quite pleasant particularly in a smaller bowl. In one pipe in particular it had hit a sweet spot that made it sooo pleasant until one day I decided to remove a fare amount of cake.

The sweet spot is coming back and so is the joy in this blend.

With my larger pipes it has never come into its own so I just save it for those days when I want a shorter smoke.

Unlike other tobaccos, it takes time to get it smoking just right for me but the end result is well worth it. Not a tobacco for every day but definitely has a spot in my supply.

Beautiful room note ......... thats about it. Im not an aromatic smoker so thats probably why. I would recommend it for beginners or those who like to impress others with that nice smoking pipe aroma.