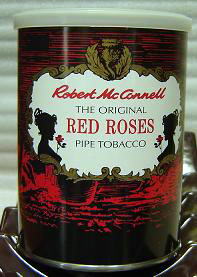 This tobacco is a perfect composition of jet-black black cavendish and some sun-yellow Virginia, embedded in rose buds. Finest aroma of roses is added with a touch of caramel to caress the palate of the pipe smoker. A true smoking experience with a unique room atmosphere.

Another of my reviews from years back I've retyped.

Some of the mixture's quite coarse, it's too wet, and the roses are easily identified in the tin-note.

The smoke? Oh dear. But, I can't really get mad because a blend called Red Roses tastes like a flower bed. I take blame for that: bad choice!

This wouldn't be 'as' bad if the floral appurtenance wasn't as brusque. The caramel, black Cavendish and Virginia form a sweet, creamy, grassy, flavour. Another redeeming feature's the smoke's thickness and lack of bite. But the roses ruin things; they're just too potent.

I wouldn't expect to enjoy a blend called Red Roses, and I don't. Two stars, I can't slam it with just one. That would be like complaining that your beef tastes beefy!

It doesn't help this tobacco that I've just eaten a great lump of fudge (hand-made) before hand. So to be fair, this isn't a bad tobacco. It's just nothing special.

It looks pretty much a mundane cavendish mix with a few golden leaves (and I mean a very few). Very coarsely cut. Very dark. Nice aroma, with a hint, of............something that might well be roses, but more Debenhams perfume counter.

It looks a lot like Sunday Fantasy minus the coloured leaf. It tastes like a wishy-washy version of it too.

Burns nicely, not too many relights, which is the bugbear of so many good tobaccos and packs quite easily despite the rather rough cut.

This was only a 5g sample.

Will I be purchasing the big rack off tin ?

Give 4 stars cause it deserves much more than the 1.8 that it had before my review. You have to like flavoured tobacco to like this. If you don’t, what are you doing with a tobacco mixed with rose buds? It’s not McConnell’s fault 🤷🏻‍♂️

I smoke this 'on occasion'(rare occasions) It could never be a daily smoke - and 'monthly' would be a lot! It's the sort of thing that would be very easy to bash...but it's so weird I like it! It actually has 'roses' ie. open up the tin and there are little pieces of 'rosebuds'. It smells like like roses and caramel! It's one dimensional and sweet! If you don't care for roses or caramel - you will hate this stuff! However, if once in a blue moon you want something sweet and unusual with some groovy tin art (there are 2 beautiful ladies showing cute rosebud breasts) then by all means go for it! I give it 3 stars for creativity! If I had to smoke it more than once a week...I'd probably give it only a single star. It burns well and isn't goopy. I only smoke it in a cheap butz chacom petite pipe... I dare not risk contaminating one of my good pipes! If you want less 'perfume' and a bit more complexity with at least a hint of real tobacco - try Glen Piper! They are 2nd cousins...bonded by black cavendish...

I expected to like this tobacco, being a fan of good quality aromatics and of rose flavour in general. It turned out the opposite. I smell caramel and generic pot pourri rather than roses. The resulting smoke is sweet to sweetish. I like many McConnell’s tobaccos, but this one I’ll have to throw away.

Age When Smoked: Fresh from tin to few months old.