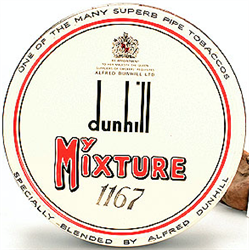 I originally purchased this under the label "Cuba" from the Dunhill store in London in 1999 as part of a larger mail-order. As I understand it, this was the last year the private-label "My Mixtures" were still hand-blended by Dunhill in the London flagship store (later production was shipped out like all of the mass-market mixtures to Murray's).

Cuba is a balanced blend wherein each of the components makes its presence known and contributes to a unified, distinct whole--which is the essence of a true "mixture." The Virginias provide a dry background (kind of like the tannins in Chianti), while the Cavendish adds a slight sweetness, and the Perique contributes its peculiar spice. The cigar leaf, however, is the prime attraction and is discernible throughout the smoke (and in the side-stream aroma), adding creaminess and depth. The cigar leaf is of the highest quality: the description says, "Havana Filler leaf," and I believe it.

The tobacco itself is a slightly finer cut than usually found in Dunhill blends, and accordingly, it ignites readily and remains lit with little effort or attention. I only wish I would have stock piled rooms full of this stuff when it was still available. I wonder if Dunhill would ever consider reissuing a series of premium quality, hand-blended mixtures that hearken back to their halcyon days. I for one would be willing to shell out some extra bucks to take another trip to "Cuba."

Notes: Smoked in various pipes, from various vintages, all of them from the 1970's or so. No longer manufactured, this is the famous My Mixture No. 1167 aka Dunhill's Cuba.

Aroma: Dusty, much like the aroma of old leather-bound books you might find sitting in the infrequented corner of the basement level of your public library. Cigar leaf is prominent on the nose, as is sweet Japanese plum, cherry pit, ripe white peach, and chocolate.

Taste: A wonderfully strong cigar flavor, which is very reminiscent of the old La Corona Cuban cigars from the 1950's and '60's. These had a wonderful strength, the rich spiciness of leather and forest earth, but without a hint of bitterness. 1167 also has good plum flavor and nice pure straightforward tobacco flavor without adornment. Ultimately it is spicy at the expense of being a little middle-heavy and lacks the depth that latakia might help to add, rounding out such a blend.

Bottom Line: No longer available. For those who wish to relive the days of the pre-Embargo Cuban cigars while smoking a pipe, this comes closer than any other cigar-leaf blend ever will. For the less sentimental amongst us, this is a nice cigar-leaf blend which adds zest to a good pipe tobacco base, but is a fairly even mix of the two flavors.

Not the lightest in body and nicotine (as can be expected from Dunhill!), but delicate in taste. Perhaps TOO delicate, as the main contribution is given by bright Virginias which aren't very sweet and the cigar leaf can be noticed only as a light spicy note: this makes it OK even for those who don't like cuban cigars, but perhaps it's a choice which makes 1167 lack in personality. It's similar to the old Balkan Sobranie Virginian N. 10, although this one was better and richer. GLPease Robusto and Fox's Banker's are fuller and stouter in taste, so I'pick these two instead (but they have Latakia, so you might disagree). Great fluffy white ash, anyway!