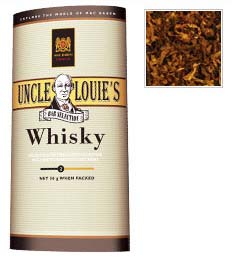 Uncle Louie Whisky comes in one of those plastic barrel looking packages although I understand you can also purchase it in the 100g tins. Not too long ago I received an order of several Mac Baren's blends I've never had the pleasure of smoking. I'm slowly working my way through them and tried Uncle Louie's Whiskey last night because I wanted something sweet.

This tobacco burns well and certainly offers a sweet taste with a hint of the Whisky flavoring it advertises. It is a little bitey and while some smokers like a bite, I really don't. Also, the strength was lacking to the point where it was really hard for me to "sip" slowly as I was seeking a little more punch.

If a light aromatic that bites a bit is on your agenda for the day, old Uncle Louie's Whisky may be what you are looking for.

I prefer the rum but this does have a nice sweetness to it and probably a good deal better than Borkum Riff's version. Like their Rum blend worth a try, but that's about it.

Here me and my wife differ she likes Uncle Louie's Whisky, but it needed some dry time. I liked it when it was fresh, she likes it dried out. I would say there is no whisky flavor here, it is very strong in nicoteen. It is full bodied and I think it burns the mouth like sticking a handfull of fresh out of the oven pie filling into ones mouth. This one really needs to be smoked very slow. I can't taste anything but heat here. My Personal Note rating 3.1 I won't get this again, my wife would though.

I have also done a video review of this tobacco. view it at

Open the tin... it looks gross, and smells gross. Like they poured junk all over it, and it's hard as a rock. The taste and smell are both completely unpleasant. There's not much good to say about it. Thankfully it was my friend who bought the tin. He seemed to like it OK, for the record, smoking it out of a cob on the drive up from Virginia where we picked up ungodly amounts of toabacco in person at JR's. Personally, I favored the Dunhill London Mixture and the Old Gowrie I got out of all the ones we picked up. This particular blend was the utter junk of everything we got in my opinion and I don't really understand how my buddy can enjoy it. Then again, he's the type to leave his tobacco / pipes in his car overnight on cold nights and doesn't seem to notice the difference, so hey.

Not my cup of tea at all. Hard to keep lit,and it bite's all the way,and the flavour was utterly dreadful!

This doesn't even deserve,one star!!

A nice, new tobacco from Mac B and one I should have reviewed a lot sooner.

A nice, pleasant and agreeable smoke. Quite light. The whiskey doesn't come through all that strongly, so at times during the bowl you might actually forget it is a whiskey blend. However, when the taste is "on" this must actually be one of the best whiskey blends out there. Ah, it's nothing like Peterson's Irish Whiskey, of course, but in it's own Aromatic category this one is a keeper.

Wet(ish) in the tin, agreeable, promising tin aroma. Packs easy enough (as Mac B blends usually do). Lights well, charring light is pretty okay. First puffs are none too strong, but still the flavor comes well through, and it is very nice in the beginning indeed. That doesn't mean it'd be a bad one after that, not at all.

Somewhere along the way the base tobaccos (which make the difference in Mac B tobaccos) come more to prominence, and the whiskey sort of recedes from the mix, not disappearing completely, but coming back every now and then. Room note is very agreeable, so this will be good in a company, too.

All in all, if you're going for a light one, this wouldn't be a bad choice. It isn't a bad choice to go with a whiskey either, though I'd steer clear of smokier single malts, or cask strengths here and stick to eg. a smooth Irish one (even if it's Scotch this one is cased with). And my rating.... well, I'm sure to buy more of this, so this will go into the aromatic rotation.

To make the whiskey experience a bit more twist, tried this in a corncob, too. Pleasant surprise, but I guess this needs a quality (aromatic-dedicated) briar to come out at it's best.

Basically tasted hollow without much body and no finesse. Rough throughout. I found that packing it tighter than normal helped lessen the tongue bite somewhat but...

If there is no tongue bite, it would have been a passable smoke!

I did not finish the pouch. Sharp, bites on the tongue and the whiskeyflavour I think is chemical. one of the worst I ever tried!

I too got lucky in the competition and it was my pleasure to be introduced to these wonderful tobaccos. These are indeed high quality, and seem to be very similiar to Mixture only with the booze added. I didn't give this one a higher rating, mostly because I still prefer mixture the way it is, and I'm not a huge fan of Scotch Whiskey flavored tobaccos (except for Orlick's Scotch Mixture). This is very nice stuff however, especially when compared to most Whiskey aromatics. I prefer the Rum mix, but I'm pretty sure this is being biased by my personal tastes. Go out and try it, it might just be your thing.

Well, I was one of the lucky twenty-five people to have won the Mac Baren Uncle Louie Competition (http://www.mac- baren.com/sw1719.asp).

I have yet to try the Caribean Rum offering as I am going to finish smoking the pouch of Single Malt Whisky. I have not tried other tobaccos that have Whisky flavouring, so this is my first amateur review of this blend.

The pouch was fresh when it arrived from Denmark. The smell of the tobacco when I opened the pouch was inviting and intriguing. It was not over-whelming at all. I chose to try this tobacco in a brand new pipe which I purchased last week. A W.O. Larsen Prince Pipe (Port) was employed for this. The tobacco packed well; sprinkling a little into the bowl lightly tamped and then added twice more with added firmness. The char lighting went just as planned. The second lighting introduced this wonderful tobacco to my taste buds. The smoke was moderate; not heavy and not light. Not having ever tasted another Whisky blend, it is hard for me to comment on the taste except for the sweetness that seemed to appear.

Now, I don't want to scare anyone off at all by that. It wasn't sweet like my aromatic blends are; no goop, no wetness, in fact a rather cool and dry smoke. I must admit that the pipe I was using was extraordinary for this tobacco. The sweetness is felt mostly in the upper part of my mouth in the front of my teeth. This also is felt on the sides of my tongue. It is exquisite to say the least. Again, sweet but not in a bad way.

The bowl was tamped down appropriately and the pipe only needed re-lighting once during the smoke. The tobacco sunk to about a 1/4 of the bowl and then it was done. Took me a leisurely 45 minutes. The ash was white with a bit of black and only two small flakes that survived my puffing.

I don't know if this tobacco could be classified as an aromatic or not, but I think that it will appeal to most smokers. I will be interested to see what others have to say about it. I have learned that it is available now through Knoxville Cigars online for those who wish to try it out.