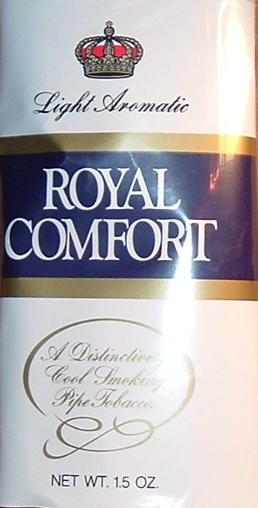 A European Cavendish. Brown and black with a touch of golden Virginia. Extremely mild and smooth.

The vanilla is prominent because of the black cavendish and the topping, which is also a little chocolately. There's something else in the topping that I can't ID, but it reminds me a little of birch and the alcohol/chemical base is distracting. I don't get much from the burley at all, but I do get a few honey and grass notes from the light cavendish and Virginia. Has almost no nicotine. Comes close to biting if you puff like a stem engine, but that is avoidable if you go at a slow or moderate pace; the latter describes the burn rate. Leaves a little moisture in the bowl, and needs an average number of relights. It's a decent work and play smoke that really doesn't offer anything beyond a pleasant smoke, but that may be enough to suit you.

I smoked a fair amount of this back in the day. Whatever the black cavendish flavor is, it captivated me for awhile. I smoked Capt. Black also. After some time I'd had enough and still can't get too close that aroma. It's as strong and permeating as whatever they scent candles with. I detect that aroma in Frog Morton also.

This is the second tobacco I have reviewed in a 24 hour span and I do not wish to sound overtly negative, but but just seems to have happened this way.

I don't wish to recount anything as to how I happened to purchase this tobacco, I prefer to forget. I plan to forget everything about this abomination. This is the worst tobacco I have ever smoked. I know full well that it is a drug store blend and that I, a former tobacconist, should know better. There are drug store blends that are among my favorites. Royal Comfort, though, is a boil on the honest body of redily available domestic tobacco and on tobacco in general. Dear me, but I do hate it.

Now, let us never speak of it again.

I was pleasantly surprised by this blend. After stopping into my local tobacconist a few times I noticed that this had appeared on the shelf. When I asked why it was there the man behind the counter said an elderly gentleman had moved to the area recently and requested they stock it, being as he had smoked it for the last thirty or so years. He would stop by every week or so and pick up a pouch, which meant they had a bit more than they really needed. I decided if it was good enough for it to be the only thing the guy smoked it deserved a try.

I will not be buying Captain Black EVER again. This hits my OTC aromatic needs right on the nose. Pleasant, good amount of flavor and a price that blows CB out of the water. The flavor is a coffee heavy mocha and doesn't seem overly cased, the backbone tobacco being of decent quality.

Works best in a large pipe, but might not appeal to some. As a bonus, I now know what had been smoked in my GBD Super-Q before I got it.

Another Middleton I enjoy very much.

A very pleasant all day smoke IMO. Nice room notes, mild smoking and no biting or burning. Stays lit to the end. A mild cousin of 1Q or CB in some ways. This is another blend I wish I could pick up in 12 or 14 oz tins!

Update 1/31/17: I picked up a six pack of pouches online before this blend disappeared. I was sorry I did. Either it changed, or I did. Not good. Gave 5 pouches away and tossed the open one.

My expectations were pretty low for this one, i find the only middleton blend i enjoy is PA and if it wasnt for that id never give them a second glance. I had never heard of royal comfort until i saw it on the shelf(beside middleton cherry, the only two blends in stock so it was a no brainer)Upon opening the pouch, i was surprised how dry the blend was, i expected a goopy mess, the aroma was musty and woody, not terrific. it took the match well and stayed lit the whole way down. I expected more of a cavendish presence but the pouch was dominated by ribbon cut burleys.The flavour was that of aromatic cedar and the room not was similar. The heat this blend gave off was "Royally uncomfortable" and i was not impressed in the least.Another crappy middleton blend with cheap cigarette tobacco and little flavour. Given my choices at the store id say it was the lesser of two evils but there are definatly better OTC blends out there. I will finish the pouch because i hate throwing anything out, but i will not be buying this again.

The only positive thing I can say about this stuff is that it is infinitely better than Captain Black and somewhat better than Prince Albert. There are certainly better OTC blends available.

If you are just starting off as a pipe smoker then this is a good "starter" blend. Very mild, packs, lights and burns well, and can be satisfying if unexciting.

If you are starting out with pipe smoking or want a "generic" tasting, mildly sweet blend, Royal Comfort will fit the bill. I smoked this on and off many years ago and was never disatisfied. Over the years I have had the pleasure of smoking much better blends and as a result, Royal Comfort has fallen by the wayside. It is too minor league for me at this point in my pipe smoking experience. I can still give it a hearty recommendation since there is nothing wrong with it. If you are smoking out, you probably won't get any of those "it's a crime to smoke" stares that are all too prevalent in society these days.

I have smoked royal comfort for years and would not change. I have tried others but come back to royal comfort.

another drug store tobacco,,AGAIN,,ive been thru these blends for long time but u have to give ur self a try,,well i would say captain black royal will be more qualified for the test,,its not tht sweetend no heavy moist waste will be there decent cavedish and a custard smell tht reminded me with my childhood days it worth the price spent for one pouch i guess,,wont be on my list

Another failed Captain Black knockoff! Save you're money!

I remember this tobacco, Back in the 1980,s they had a Tv commercial featuring this, some of you oldsters may remember the old sea captain battoning down the hatches to ride out the storm. Well that inspired me to make this a regular blend at the time, it was alot better and cheaper than borkum riff.

Bought in semi-desperation, low expectations, pleasant surprise. Not half bad for a drugstore type. Not heavily Aromatic.

Royal Comfort is a typical cased black Cavendish. It is not as moist as some, and doesn't goop up the pipe too much. It has a grassy undertone to the flavor that I did not care for. It is very mild with a mostly semi-sweet chocolate taste to me.It has very little tobacco taste, and no oomph either. I would think it a less costly alternative for those who like Captain Black.