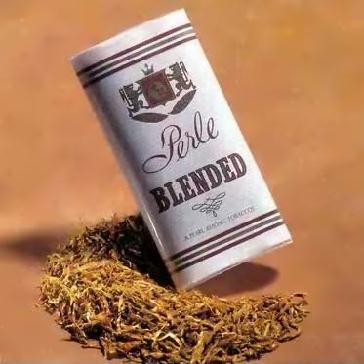 A blend of Virginia and burley. Pressed into a plug, cut and rubbed out after aging. The blend has a round and rich tobacco taste.

Notes: This used to be made by the Pearl tobacco company, but now the pouched version alone is available from Orlik. The pouched version, I have found to be drier and less flavorful than the old tinned version, which I will review here. I have smoked a few hundred grams of this and it seems at home in most any pipe I put it in.

Taste: If I could somehow be breathing warm water, I think it would taste like this. The flavors are very faint even for a Virginia-smoker like myself. Oatmeal! Corn bread, amaranth, Emmenthaler. Bran muffin, chewy wheat bread toast, black walnuts, plain tobacco flavor.

Comparisons: An honest straight burley blend is found few and far between without a heavy topping. Amongst this category, this is the most mellow, quietest, most restrained.

Bottom Line: For those who want gentle burley flavor from a superior leaf in a Danish cloak.

A very simple VA/Burley blend. It's been on the market for ages in Denmark and will probably soon mark the end of an era: Danish working class tobaccos. I reckon Perle will be included in STG's plan to phase out the good old blends*. My guess is, that the regular customers are slowly but steadily leaving the world of the living, and the blends do not appeal to newcomers.

Bright virginias and bright burley with a smidgen of something darker. Be it VA or Burley, I cannot say for sure. On the dry side, and not much pouch aroma, but definitely not the "shredded card-box" texture you find in many American drug-store blends.

Perle is almost austere in its simplicity, with just a faint hint of sweetness. If you fancy some just above average quality pure tobacco taste, this might ring your bell. It is not as acrid and cheroot'ish as Everton, and not as sweet and gentle as Royal Club - somewhere in between.

I kinda like it due to its rustic pure tobacco taste.

Give it a shot. It's on the cheap side compared to higher tier blends out there, and it's readily available on http://www.danishpipeshop.com, as is Royal Club and Everton. Theyre fun to compare, and you'll get a bit of old school Danish tobacco history.

Definitely the worst and most horrible pipe tobacco I have ever had the displeasure to smoke. I bought a pouch of it because it looked/seemed like a classic, old-school danish pipe tobacco. It is apparently produced by Orlik, and I am admittedly a fan of Orlik's Golden Sliced. It has no flavour at all, besides the aftermath of sour, acrid ash. It reminds me, or rather, I don't see a difference between this and cheap cigarette rolling-tobacco. In fact, I have a suspicion this actually is cigarette tobacco but is sold as "pipe tobacco". 0 stars.

I think this is a very good blend.

The ready rubbed mixture contains mostly medium sized ribbons, there's one or two that are a little chunkier, but the majority of the blend consists of simple ribbons.

A great deal of blends have a pouch note that can be described as "Hay Like", but this one takes that Hay Aroma to a new level; it's like smelling a meadow!

The smoke has quite a strong Burley quality to it: toasty and nutty, there's more of this in comparison to the Virginia; the taste is sweetened by the Virginia, but the Burley's running the show.

I've marked 'None Detected' on flavouring as although I get quite a full smoke, this is free from anything that seems false.

I'd say the nicotine's medium for this; no more, no less.

I didn't have a great deal of expectations for Perle Blended; "It's not had many reviews, it can't be that good", however IT IS, it's a cracking VaBur that's a Must Try!