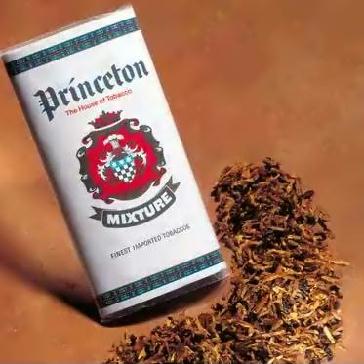 Orlik - Princeton. This is another blend where I can't see why it's not a lot more popular. It doesn't have anything 'amazing' about it, but it's a good smoke.

The tobacco arrives as quite coarse ribbons. They're not too much like broken flake pieces but the pouch has some rather thick ribbons in it. I can't really smell anything other than straightforward tobacco from the bag, it doesn't seem to have any extra toppings to the nose. The moisture's good, so on with the smoke:

There aren't any features which jump out and grab my attention; I can see why many people could consider this boring. Me however, I like the way the taste is shared. The Burley (for me) is the leading taste, it's that archetypal nuttiness that comes from most varieties. The sweet tones from the Virginia and Cavendish really work well at rounding and finishing off the flavour. Like the pouch note, it's a simple un-cased smoke.

For me, the nicotine's mild. Maybe mild to medium at a push but it wouldn't qualify as being any more.

For a whole pipe long, the burn's brilliant; even, cool, and the smoke's bite free, no matter how hard I puff.

This is a pleasure; like I said, it's nothing amazing but it's a blend that's easily worthy of three stars.

Princeton is somewhat a blend that lives its life in the shadows here in Denmark. It has ben around for ages, but is only sold in selected kiosks and tobacconists. Even though it is produced by Orlik (S-T Group) and only available in Denmark, this might be the next one they'll pull off the shelves I gather.

That, my friends, would certainly be a shame! Even though considered as a drug store blend, this is quite awesome stuff!

If you've tried Porter House from Orlik, this could be considered its stouter big brother. Dark and tobaccoish VAs with toasted Burley and unsweetened Cavendish (burley base) makes this blend the ideal crossover from aromatics.

It is considered as an aromatic, but I would not call it that. It is a rich rustic semi-sweet blend with lots of nic, lots of thick round tobacco flavour, and it packs well and is very easy to keep lit.

I imagine that this little beauty is the closest thing you can get to how these blends did taste when grandpa was young.

To you guys across the pond: http://www.danishpipeshop.com (it's not listed, but they carry it).

So, I bought a pouch of this from The Danish Pipe Shop. The pouch note is simply that of tobacco; like a freshly opened packet of cigarettes, but in a good way.

Then, filling the first bowl, lighting up and taking a few puffs, a big grin spread on my face... "Ahh, a cousin of Everton, I presume?"

Both are a bit of hidden Danish gems. Unlike Everton though, which takes a bit of time and getting used to to appreciate it's true quality, Princeton is immediately a 'tasty' blend, with burley forward, wonderfully complemented by the cavendish and supported by easy virginia. It's a basic all day smoke, but a very good one at that, not boring in the least bit. Packs and lights easy and burns consistently every time without any trouble.

I'm hesitant to give it a full 4 stars yet, but it surely does not fall very far short of that. A somewhat stronger 3 than Everton from me, and will surely be buying again.