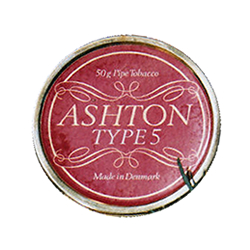 Aged in old whiskey barrels for one month, this mixture of dark red Virginia, Maryland burley and black cavendish is then blended with an extract made from smoked American hickory nuts and flavoured with the essence of tropical fruits. The very cool, extra mild and rich taste of this tobacco could prove to be your undoing.

I believe that due to all the black cavendish, this blend has a lot more body than strength. The Maryland leaf was off in the background and the Virginia had a hard time being the lead singer. Thus, a rather weird smoke for me. I liked the overall presentation okay, but it just didn't ever get past the unnaturally sweet stage and that was the deal breaker for me.

Another recently unearthed tobacco tin after my late spring cleaning spree. I bought this tin (together with other Ashtons) in Buenos Aires in 2004. I hadn't seen these Ashtons before, so I was a curious.

This indeed is a heavily cased, very moist mixture. It has a very strong fruit syrup aroma, which reminds me of some of Petersen & Sorensen mixtures (their Danish Mixture in particular). After five years of being opened, the contents of the tin is still moist, but it is now down to a manageable proportion. And finally I'm able to appreciate the nature of the tobaccos underneath the casing.

This is a nice, mild blend. The aroma and artificial casing are still present, but mingle quite well with the Cavendish and Burley. Virginias in her are nothing more than an anecdote. Fruity, gentle, strangely sweet with a touch of sourness, this is a pleasant enough blend to be smoked, in my case, every now and then. But if you're an aromatic fan, this might suit you as a regular smoke.

N.B.: I know it says in the above description this blend is "aged" in old whisky barrels. Well, there's no trace of whisky flavoring here. It also says it is blended by William Ashton-Taylor. With all due respect I very much doubt it. This, I believe (and it says so on the tin) is blended in Denmark, with all that entails. It may have been a discreet English aromatic many years ago. It's not now. It's a very Danish aromatic. Good, fruity, but a Danish aromatic in all the extent of the term.

Almost like Wessex Rich Aroma. Wessex has it down better though. Not a bad smoke, just too much flavoring!

Sometimes, social considerations dictate that I have to smoke an aromatic. Having forgotten that I have a large tin of Ashton 6 in the office, I bought some Ashton 5 on my way to a social event where I have been informed that latakia blends will lead to my ostracism :). I've outgrown aromatics in general, but this one is not all that bad. It is kind of a refined version of Mixture #79 (which should be called mixture #69 because it *ks you in the mouth!) - it has a pronounced fruit flavor, but not one that is reminiscent of candy or Erinmore :). No real tongue bite, but it smokes awfully wet and it gums up pipes.

This tobacco is one that I'll keep around for smoking in the office or at parties where my English mixtures would be objectionable, and I'd highly recommend it for that or for those who like aromatics, but can't stand tongue bite.