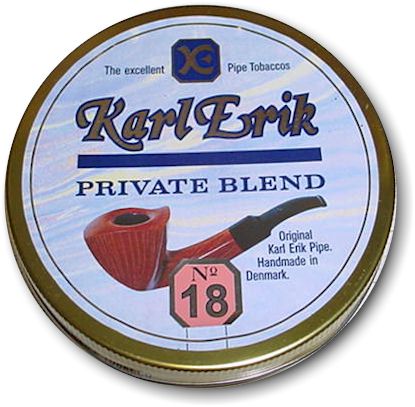 Selected mild sweet Virginia Grades are partly matured in a Soft Cavendish procedure blended with a spicy US-Burley. A decent and fresh top flavour with a taste of original Jamaica Rum completes this superior mixture. Long cut mixed with Flakes.

Pleasant rum overtones initially give way to a somewhat sweet, nutty, burley with background spice. The spice is most notable on the retrohale. Base tobaccos are good, not great. 2+.

Age When Smoked: No tin date.

Purchased From: The Briary, Homewood, AL, one month ago.

An unusual Burley/Rum combination that just might work for those who enjoy being in the Navy. I detected a whale of a lot of rum in this one and it overpowered the Burley. Thanks to the Kentucky leaf it does contain a hint of strength. The rum flavoring will immediately be detected and trust me, it is unrelenting all the way down the bowl.

Despite the evidence of the quality of this mixture, the problem was with the rum casing.

It was overwhelming in presence and prevented from tasting the tobacco.

I believe that if the casing would be transformed into a topping, this would prove to be a go-back-to tobacco.

Im not a fan of blends flavoured with alcohol as I am not a drinker, if its your thing, you might enjoy it and do not let my review discourage you. MO,South Africa

Yea, this is a loose cut mixed with small flakes of about 2" by 1", composing about 25 to 30% of the blend. The rest is a mixture of golden, brown and black leaves, of obviously high quality.

Yea, the casing in the tin is rum, my God it's making me thirsty! Somebody, give me my ration of rum!

Lighting is rather easy and the smoking is mellow but tasty, the flakes slowing down the combustion, preventing eventual tongue bite and adding a nice kick. Nicotine wise, it's a fair intake, nothing to make your head spin.

The casing is bordeline on the taste buds attack, but smoking it slowly and letting the bakkie dry out avoids it.

A nice, different tobacco, I liked it and I think I will buy some more tins and let them age, to see what it will give.

Another long-time offering from Karl Erik's Private Blend, this one takes the form of a fairly standard Danish type of mixture, that is, different medium cuts including some small flakes. Nicely enough smelling of Rum when opening the tin, this rum is not overwhelming in the smoke itsself. It smells similar to Exclusiv's Whisky, with chocolatey undertones. Burns well enough and no goopyness experienced.Don't pack it too loosely or it could burn hot!