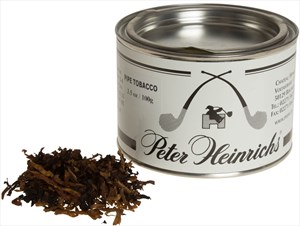 An really unique mixture with discreet vanilla flavor, full in the aroma and extremely mild in the smoke pleasure. Based on old-belt Virginia, best american Burley and black Cavendish. Light and cool in smoke with an aromatic room note.

Cut: Comes as a nice manageable ribbon cut, similar to what you would find from a Cornell & Diehl blend. It feels dry to the touch but is still spongy which means it has some moisture. Just right.

Tasting notes: This is my problem with most aromatic blends. I read the other gentleman's review on this blend (the one older than mine) and thought this blend would be different. But upon light up I taste nothing of what I smelled. After a bit of slow smoking and the blend cools down I do sometimes taste a tinge of something in the same ballpark as vanilla, like a floral sweetness perhaps... but that is disappointing after how enchanting it smelled. Flavors are extremely mild although I do get a bit of spice on the end of some draws.

Mechanics: Smoke this blend slow, you don't want it to heat up.

Extra Remarks: A disappointment for me, but someone might like this blend. I feel I have to give 1 star. Perhaps I will revisit at some point.

My first pipe tobacco i've ever smoked. Bought 100g of it, and I still have 50g left. Not because its not tasty - its very rich and has a really nice flavour. Just because I'm not that big a fan of aromatics anymore. But I still smoke it by times, when I crave for some fine vanilla flavour.

No. 14 is a very decent tobacco, with a unobtrusive, tasty vanilla-flavouring. The Burley and Old Belt Virgina harmonize pretty well.

All in all a good smoke that is worth trying. I'm glad I got to smoke this as my first tobacco, as there are plenty of awful vanilla-aromatics out there, but No. 14 has also tobaccos spice and taste to it, along with it's tasty vanilla flavour it's just a simple, yet flavourful smoke. For anyone who like vanilla-aromatics, this is one of the better ones!