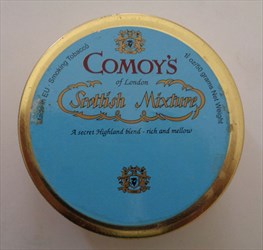 Sensational Orientals prevail over the Virginia ribbon that is very dark from aging. The natural sweetness is enhanced by a little something that I just can't put my finger on. I had heard that this blend was a real favorite back in the day and I can concur. It is delicious and I teared up a little when my tin had been consumed. It is no longer produced but if I ever find another tin, I may just buy it!

My favourite and belloved scottish mixtures of all. Threw many years I was charmed by BBB Scottish Mixture, untill I tried it from Comoy's. Naturally sweetnes, high quality of it's all components - if you like scottish mixtures or would like to rest from english, then definitely choose it.

One of the most wrongfully underestimated tobaccos - I think of Comoy's Scottish Mixture just as of my pipe's St. Grail.

Don't really know much about Scottish blends and urged on by my son's eclectic taste in tobacco this old fart thought it was time to try another.

Thought this was going to be a Latakia bomb from the opening tin smell. Still think there's Latakia in it, but I have been told there really is no Latakia in this blend. I have a suspicion that someone sneaked it in when no-one was looking.

The tobacco itself is rather moist from the tin, but dries out rather quickly. It is very dark in colour with some golden strands within. It isn't the best burning blend I've ever had and requires frequent relights, which makes the mixture all the stronger. The latakia-like smell decreases after charring light and disappears altogether after progress through the bowl.

At a loss to describe the taste to be honest. I guess the closest I can get (may edit this at a later time) is a strong virginia interlaced with alcohol of some sort (probably whisky). My get-out clause was stated at the start ; I know bog all about Scottish mixtures.

Surprisingly no comment on the room note so I guess it must be acceptable.

Won't be too upset when this tin is finished and as this review surely proves : I must go away and do more homework !

Pipe Used: Most of my briars

Purchased From: SmokeKing (Greens of Leeds)

This is alright for a while; that's providing you can tolerate a room where it's impossible to be able to see due to the amount of smoke in it! I can't be exactly sure as to what the topping is, but I don't mind saying, whatever it is I get a 'stickiness' from it; it seems as though it may be from some sort of liquor or spirit. Either way, it causes the smoke to be a bit of a mess. This doesn't tend to bite me, but, if I draw to forcefully the heat is far too much to tolerate; red hot. I think the nicotine's quite mild in this, if not very mild, I don't mind that though as I vape for my nicotine and pipe for flavour.

I don't like this, it's not the worst out there but very far from the best.

I tried this from an old tin that has been open for a while. There seemed to have been a liquor topping at one time, but that has faded. All that was left of it was an underlying sharpness that I didn?t really like. The base Virginias don?t really shine, and there is a weak Oriental leaf trying to dominate. The overall taste isn?t sweet, yet not bitter either. Now and again, the flavor comes up the a ?medium? level, but not for long.

Rather mild, completely uninspiring. The only reason I could see for keeping it around would be to use as a ?working in the yard? smoke when you want something unobtrusive.