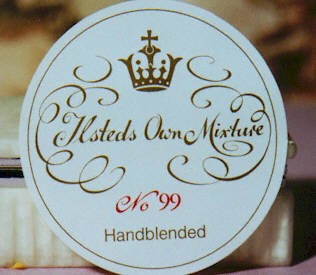 This mixture is based on five different tobaccos: burley, Virginia, black cavendish, Oriental and dark fired Virginia. An ideal mixture, mild in smoke.

This gives off a lovely sweet coffee-esc smell from the unlit mixture. The blend includes a few fairly chunky pieces of tobacco of which a few are sadly 'twig' like and need to be removed. Another low point is the content of water, it isn't un-smokeable from the packaging but a short amount of time to dry definitely improves the enjoyment. There appears to be a good selection of the different types of weed, there doesn't seem to be a dominant variety in mine but it's a fair mixture.

Once it's lit, which is quite an easy task providing it's been allowed to air, the taste is about exactly as I was expecting from the smell, there is a lovely weight of added flavour which has a nice smoothness to it, there isn't any bitter quality that can often be associated with coffee aro's. Although the added taste is easy to pick out there is also a nice subdued tobacco flavour. The different tastes are tricky to separate from one another because the taste is a little busy as there are a few tobaccos and added flavours included so don't buy this if you want a blend to enjoy the different tastes of tobacco in their entirety. For the length of the smoke this one hasn't bit me but I have noticed the temperature of the smoke becomes too hot if strained, it's a tobacco best suited to gentle puffing. The nicotine is quite mild, not a blend for "N" lovers!

Ilsted 99 is a pleasant enough blend but for me after fifteen minutes I want to reload my bowl with something else as it becomes a bit boring!