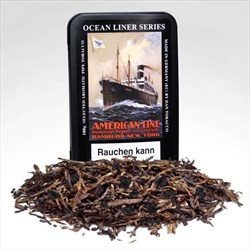 This Virginia grade tobacco has a natural sweetness that is ripened in the press rounded off with black cavendish and a soft vanilla flavor. It is a mild and cool smoke with a fragrant bouquet.

A dashing HAPAG (Hamburg-Amerikanische Packetfahrt Aktiengesellschaft) ocean liner, cutting the blue broth bounding for New York, pre-Hindenburg, pre-everything, graces the cover of this gorgeous tin, making me feel like a surf-secure, young Graf von Zeppelin, smoking his Pfeife on deck, making his way to swinging Amerika! My Rauchenkabinett [smoking cupboard] just loves these Ocean liner beauties, especially after I have disposed of the contents of the tins!

This by-the-numbers vanilla honeydew is not the worst of the series.

I've delved into the world of Vanilla flavored pipe tobacco many times over the years and this one ranks right up there with the best of them. A delightful sweetness just perfect for an after dinner dessert. It does goop up the bottom of the bowl and ghost the dickens out of the briar, so do remember to reserve this one for your aromatic pipes. Unless, of course, you enjoy a little (okay, a lot) of Vanilla flavoring mixed in with your Latakia.

The tart and tangy citrusy Virginia is a little grassy, but it's quite sublimated by the vanilla topping and the sugary sweet black cavendish. The vanilla seems a tad artificial. It's got a slight sharp note that did remind me of coconut, though I'm not certain that flavor is really in the mix. It needs a fair amount of dry time. The strength and taste levels are mild. Barely has any nicotine. If you puff too fast, can bite a little, so I suggest a slow puffing cadence. Burns a little slow if not dried, with a very consistent flavor from top to bottom. Leaves goop and dottle in the bowl. Requires some relights. Has a lightly lingering, pleasant after taste and room note. One and a half stars.

Ocean Liner Series – American Line has basically the same aroma as in Dan Tobaccos Sweet Vanilla Honey Dew but less intense. Throw some ready rubbed SVHD (VA) on a Black Cavendish basis and this is what you will get. The mixture is not very forgiving and will bite your tongue immediately at any drawing above sipping. Always combined with developing an unfair amount of heat. I was not able to detect tobacco flavor of any kind. I don’t want to reduce this to hot, stingy, vanilla flavored air, since I really like Dan Tobacco and their kind of vanilla… but I do.

Recommendation: Print out the tin art picture and glue it to a tin of your favorite tobacco or mix it with something else.

This is a relatively straightforward VA/cavendish vanilla aromatic. The price is high, and while I realize that the tins are neat, I do not think the tobacco inside is commensurate with the price.

This is a loose ribbon cut, and is very moist. It requires drying out in order to have any hope of smoking without a flamethrower effect. Unfortunately, even after drying and careful packing, it is still difficult to smoke this without singing your tongue. It is not just that it burns hot; it actually seems to sting, no matter how slow you puff. I have read that vanilla can have that effect, but I have enjoyed other vanilla blends without this effect.

The flavor is pleasant when it is not attacking your tongue, but it is pretty much a one-trick pony. There is little depth here, and that, coupled with the tongue bit, makes this one to avoid, rather than seek out. I give it two stars because my wife likes the odor.

Very good aromatic tobacco with vanilla flavouring. Smoking time was 1,5 hour for one ignition. My friends rate the scent as very pleasant, unobtrusive. My stable tobacco.

This brownish tobacco, more of a broken flake that a ribbon cut, has black cavendish added. It has a nice consistency and moisture content for packing and is easy to smoke with an ideal burning rate. After opening, I didn't humidify my tin and I felt that the blend dried faster than most others and then started to become harsh. The tin aroma is very sweet of vanilla and coconut and these flavors dominate the taste and overpower that of the tobacco. Aromatic fanciers might enjoy this blend and I might choose it during hot weather as a lighter smoke but it is too mild for me as a regular.

The tobac provides a soft smoke that is cased with a somewhat synthetic vanilla/coconut flavouring. Imagine having coconut cream pie with your garden variety generic vanilla extract rather than with vanilla beans--that's what this reminds me of.

Sometimes, when you are with friends and its late, you feel like having that generic slice of pie rather than the $8.00 slice at Wolfgang's. You're there for the conversation, not the dining experience.

Well, so it is with this tobacco.

It packs easily, burns like a dream (one char, one match, no sparking PG). Experience it with slow sips and it's like desert at Ma's in early Fall.

Tobacco flavour does indeed slip through, including VA's heated sting if your too ambitious. The flavour of Cavendish bounces off the vanilla casing, giving that illusionary coconut sensation.

This is not as refined as MacBaren's Vanilla Cream, but then again, it isn't really meant to be. Instead, F&C is a simple, utilitarian, working man's vanilla offered in an upscale tin. And I must say: it does have a tasty room note.

Granted, there are far finer blends out there. However, I do enjoy Ocean Liner F&C as a change of pace (I mostly smoke Burley based tobacs). So, I'll pick another tin next year, but only if it should happen to go back on sale.

Now, please excuse me as I follow that room note....

I bought this tobacco in the first place for its attrative tin,as I did with the other four in the series On opening the tin one is met with a really big sweet aroma The tobacco is a nice mid brown with abit of dark cavendish amongst it,good texture and not too moist Did not think I would enjoy this tobacco but was pleasantly surprised.Vanilla flavour,tobacco taste came through as well.nice nose from pipe bowl I am mainly a va/english/perique smoker but I can see most aromatic lovers enjoying this one