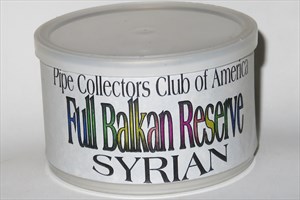 Although I disagree with another reviewer's thoughts regarding Cyprian and Syrian Latakia (in more ways than I have the inclination to type) I will say I agree with the assessment that this particular PCCA offering is not quite as sweet as its Cyprian brother. Other than that, I taste relatively little difference in the two blends.

Both make for smoky presentations and the Cyprian leaf has always been a bit stronger to me. And, both the Syrian and Syrian versions are, to my mind, among the finest you can pick up anywhere, especially with all the aging.

According to Bob Hamlin, this blend is exactly the same as Full Balkan Reserve, except that the Cyprian Latakia has been replaced by Syrian, hence the name. As such, it is an excellent study in the differences between two forms of Latakia, and much of this review will be cast in comparison to FBR.

Although the curing processes are similar, Syrian Latakia is made from a different variety of tobacco, and is cured over different spices. The result is a lighter-tasting, drier, more cleanly smoky tobacco than Cyprian (which always sort of reminded me of a smoky Cavendish). Among other differences, it is not as sweet as Cyprian, and lacks Cyprian's sweetness and some of its nuttiness, as well as Cyprian's mustiness. Syrian is, however, more overtly spicy in its own right than Cyprian.

Because the Syrian is a lighter tobacco, it doesn't balance the Virginia sweetness as well as the musty, caramelly Cyprian, so even though the overall sugar levels are lower in FBR-S, it tastes paradoxically sweeter. It is also spicier, although the Syrian spiciness combined with the healthy percentage of orientals gives FBR-S a wave of spiciness that risks overwhelming the taste buds, with the result that it seems less complex than the original FBR. The separate choruses of virginia sugar and oriental spice leaves the smoky component tasting slightly out-of-place -- it's not intense enough to really compete with the sweetness or spiciness, so it comes across mostly in the nose.

If the preceeding paragraph sounds too critical, remember that this is in comparison to the perfect 10 of Full Balkan Reserve -- the Syrian version is still a wonderful blend with an outstanding spiciness and natural sweetness.

I have asked myself why bother to review an old blend, but given the growing demand and high price for some of these aged blends I think it’s worth a few comments. This is based on a tin of Full Balkan Reserve Syrian from the early 90’s and the very first word that comes to mind with this McClelland made blend is “depth.” At least to my taste, it isn’t quite as smooth as Full Balkan Reserve from the same era, but the flavor is more complex. It offers the wonderful incense like taste of Syrian Latakia and along with some spiciness too albeit a light spice. The spice component is for me what separates it from its sister blend. Like the majority of the McClelland made English/Balkan blends I have smoked, it is pretty mild, especially in the nic department. The Virginias offer a bit of sweetness which could be due to age. The surprise for me is how well the Latakia has held up over the years. As with most McClelland made Balkan blends, the Orientals are top notch. I do prefer the Cyprian version of this from the same era a bit more. The only negative is that near the end of the bowl, the flavors do become a little mottled. Given the fact that old tins of this can still be had for a somewhat reasonable price, I think it’s worth the extra coins.

This is a magnificent tobacco! Loads of smoke waft around me and envelope me with a subtle strength of presence. NO bite. Smoked slowly I notice a nuttiness and sweetness on the tip of my tongue. Burns extremely well- 2 matches. Colour and cut is varied and interesting as is the tin aroma- dark but subdued. I've got a few of tins from 2000 cellared for the future and often am tempted to open another.

See my comments in my review of PCCA's Full Balkan Reserve.