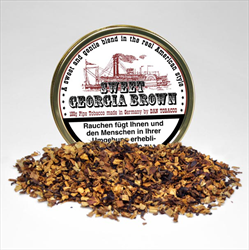 Taken from the catalogue: "This blend follows American tradition and is composed from golden Virginia leaf, best American burley and sweet matured black cavendish. A fine gentle flavour is added and blends perfectly with the tobacco's natural sweetness. A delicious mixture with smooth and cool smoke and a very pleasant scent in the air. Best in medium or larger bowls."

I purchased a tin of Sweet Georgia Brown along with a dozen others not available in the USA straight from the Dan Pipe/Dan Tobacco catalog a few years back. The tin itself is quite wonderful and unique. The tobacco itself, unfortunately, is not.

This was a tough one to keep lit and had an uncontrolled urge to bite.

The room note was wonderful though.

Sweet Georgia Brown smoked in a small or regular pipe is dull in taste and scorching your tongue. It is only in very large bowls (and even considering the use of a filter) that it begins to shine. Easy handling, no bite then and I had some good bowls accompanied by unsweetened coffee.

You’ll get a very broad cut mix of Burley, VA and BC, mildly cased with some kind of sugar, maple syrup, maybe vanilla/honey type of flavor. No cumarin was used, since this is prohibited by German law, however, I guess they tried to imitate something like that. High Burley content is supposed to give it an American touch as well, but it is processed in the European way, which turns it into …well, cardboard. Don’t get me wrong: The tobaccos used are of good quality IMO, just not very American as far as my limited expertise goes.

So, what’s left then? Given the mentioned premises, it is similar but slightly better than (the European version of) Lane Ltd. Rum & Maple and also very inexpensive. DTM’s Sweet Vanilla Honey Dew and Holmer Knudsen Pipe Tobacco are a better choice and if you were on a budget I’d rather recommend the underrated No Name (White) series. Most Sutliff aromatics deliver what’s been trying to achieve here.

After years of sticking with the same brands and blends, I am currently on a bit of an adventure trip, trying out blends I have never had before (and sometimes, never even heard of before). Despite Dan Tobacco being a local manufacturer (for me), this is the first time I have smoked one of their blends.

The tin looks somewhat old-fashioned, but then again, I'm not going to smoke the tin, only its contents. Which is a pretty wide, squarish cut; the three tobaccos used for the blend can be easily distinguished. The tin aroma is, as pipestud has noted, pleasant with brown cane sugar in it; the maple note I could not make out.

Given the rather wide cut, this is one for the large bowls; in a narrow bowl it will go out every few minutes. It's easy to pack too tightly; a light hand when filling is essential. If properly stuffed, it will light readily, burn somewhat hot, and the sweet taste is there from the beginning. The room note develops throughout the bowl, from a nice, VA-ish sweetness at the beginning to a wonderfully full, rich, sweet tobacco scent.

The taste, unfortunately, develops in the opposite direction; the first half of the bowl will fulfill the promise of the tin aroma; then it deteriorates noticeably, becoming tarry and bitey towards the end, particularly if smoked without a filter.

Not too hard to maintain in a large bowl, burning down to the very last crumbs. I'd say this blend is definitely one for the filter smokers. I tried this in a Falcon, too, but won't make that mistake again; the Falcon bowls are just too small for this blend: it burned hot and developed quite a bit of condensation.

Not an entirely bad tobacco, but there are plenty of other fish in the barrel.

UPDATE: After smoking all of my first tin, I seem to have acquired a taste for this blend. Sipping extra slowly is the ticket for me; that way this leaf doesn't turn tarry towards the end and gives a satisfying smoke throughout. Do use a filter, though. Up-rating by one star to "recommended."

Afterthought on the tin: it says "A sweet and gentle blend in the real American style" around the edge. Now, I may not be much of a judge of American blends, but so far most "American" aromatics I have tried were somewhere between horrible and garbage (especially the ones made in Europe...), so this one stands out by being definitely palatable.

FURTHER UPDATE. 09-05-23: Having tried this blend in a corn cob a few times, I find it behaves so well that I have to wonder whether the blenders had Missouri Meerschaum pipes in mind from the beginning. No bite, nice sweet smoke, not too hot, even burn... I can just about imagine myself sitting on a porch somewhere on the Bayou, smoking this blend in a cob while sipping Bourbon on the rocks...

Average aromatic blend. Quite cheap, not too sweet, not to dry. You won't feel candy stream on your tongue and also it won't bite him. Sounds great, so what's wrong with it? Why not 4/4 stars? Sweet Georgia Brown is defintely not a masterpiece, this is more a good background to mix it with "S": something stronger/sweeter/more spicy - depends what you like. If not, you will get instead quite not bad daily tobacco, where 'not bad' means 'lower than good, but better than bad'. That's why Sweet Georgia gets 2 stars.