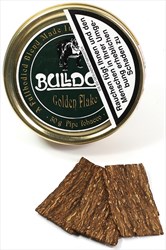 Odd. All these reviewers can't be wrong. I mean all of them say this tastes like soap.

I have to say that I find almost the entire range of Gawith's Lakeland range to be endowed with the aforementioned chemical quality, but somehow not this.

Yes, it is a bit odd when you open the tin that's for sure. Smellls really tasty to me. Like a virginia-burley-oriental hybrid should, not soapy at all. And the apparently solid block of compressed flake looks a little strange in a round tin as well. Reminds me of that plug I had from Dan Tobacco a few years ago. What was it called ? Ah yes, Salty dog that was it. Just everybody liked that except for me.

The only thing this has in common with Salty dog is the fact you need a sharp knife to carve off chunks, which was the only plus point I could see for said blend at the time.

This though isn't bad. No chemical taste here at all. Just a really pleasant - yes, mild - virginia taste akin to to those perennial classics like Capstan flake or Orlik's finest sliced. It burns really nicely in my new Savinelli pipe (you show-off git). It doesn't fug out the room either.

No, this is a good blend and one that doesn't break the bank either. At only 8.75 euros it's astonishing value, even when you add in the shipping costs. Dan Tobacco are back in the good books with this one.

This tobacco seems to have been wrongly labelled as Bull Dog in this review. It is actually a product of Dan Tobacco and should have been classified as a blend under Dan Tobacco. Having said that, I am surprised that early reviewers commented that the tobacco smelled and tasted "soapy". Absolutely not so in my view. This is indeed a good blend that gets more interesting as one smokes along. It is not unlike other Oriental/Turkish Virginias. One that comes to mind is Drew Estate's Meat Pie which contains a fair amount of Latakia. This 'guy' is quite spicy especially if the smoke is released through the nostrils and seems, IMO, to contain a small amount of Latakia though the makers do not (expressly) state so. There is also a background hint of pleasant sweetness from the Virginias. It lights well and stays lit for the duration of the smoke. It does not burn hot and has no tongue bite - highlights of its mildness. It's nicotine content is moderate and may not satisfy those looking for a strongly favored full Virginia with a high nicotine content. Yet it is very satisfying for those looking for something mild - for which reason I will rate it as four stars.

this is more as a first impression. when i opend the tin(1-2years of age) it did smell soapy. it's says it's a golden flake but it does contain some darker leaf and was abit on the dry side.

i now smoke mostly VA/PER blends. i don't like aromatics anymore but this taste as it smells, soapy. for the first 20-30min it taste real soapy, but after that VA and Oriental comes forward and the soapiness goes in the background. the taste keeps changing and doesn't burn to hot.

i like it, i'll be buying a tin again for aging. it really is change in taste than my standard VA blends.

Here's one I had forgotten about. Then I was thinking about all these references to soap in Gawith reviews. Well, folks, if you want to know what soap scented (and presumably flavored, though I don't eat it) tobacco really smells like, this is it. Burning soap, mmmmmmm. And 0 nicotine. This dog has no place in my kennel.

This was tolerable once it burned partway thru the bowl, but at first I thought I had my mouth washed out with soap. (Not that I have ever experienced this - Mom never caught me.)

Never found this with another tobacco - it tasted soapy.