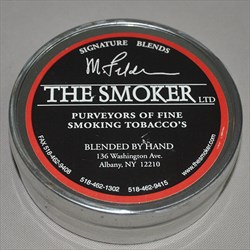 This one gets ya! A heavy laced perique blend. Virginia will give a hint of mildness and the latakia tends toward the body of this tobacco. Flavor is consistent throughout and burns down to a fine white ash.

Notes: Every year when the Chicagoland Pipe and Tobacciana Show arrives, we here at Pipes and Cigars.com work on coming up with something to make the experience more enticing. This year, we’re not only introducing a new blend, we’re re-introducing an entire line of tobaccos to everyone that hasn’t been available in over a decade. This is a project we’ve taken great pride in, as it’s something that many people have been clamoring for, for quite some time. For around 70 years, Albany, NY had an iconic tobacco shop known as The Smoker, known for a vast array of estate pipes and their own unique blends, hand crafted a pound at a time. Once pipe shows started to become popular in the eighties and nineties, those blends became familiar to people all over the country. Mel Feldman, the proprietor of The Smoker, is an icon himself, known for his intimate knowledge of ​Barling pipes, and his singular blending skills.

Mel became a fixture on the pipe show circuit, and in the nineties, he had 14 of his blends tinned for sale. When he decided to close his store and retire in the early 2000s, aficionados around the country feared that they would never have the opportunity to enjoy these wonderful mixtures again. Early this year, Scott Bendett approached Mel to ask if he would consider allowing Pipes and Cigars to bring these tobaccos back to his customers, and Mel was intrigued and pleased by the opportunity. Working together with long-time friend, Hearth & Home blender Russ Ouellette, Mel worked to precisely recreate those 14 blends, and added one more- a blend made especially for noted tobacco collector Fred Goldring. These classic mixtures are now going to be available again, exclusively at Pipes and Cigars.com starting with the beginning of the Chicagoland Pipe and Tobacciana Show on May 4th, 2013. For those attending the show, Mel will be there to reintroduce these time-honored favorites, and we’re thrilled to be able to bring them to you.

I absolutely loved this, until halfway through the bowl, when the nic hit began to set in. Then, through the spinning room, I checked out the review. It began with the words: "This one gets ya!" Wow--truer words were never spoken. I see that they've removed the phrase from the site. My feeling is they ought to put it up again as a caveat for the unsuspecting. A great tobacco, full of flavor, but definitely not for the faint of heart.

This is refreshingly different. Just the right amount of Perique adding a tart spiciness. The Burley and Virginias combine to lend a sweet nuttiness. The Latakia is lightly done providing a mild smokiness. Really delicious. A pure pleasure to smoke.

Slightly moist but can be smoked right away. Burns very well. Mild to medium in body, mostly medium. Medium in flavor. If you want something a little different give this a try.

The grassy, citrusy, slightly dark fruity Virginias acts as a base for the other tobaccos, though it remains in the background much of the time. The burleys are a little molasses sweet, mildly nutty and slightly earthy in a condimental role. The Cyprian latakia provides a smokey, woodsy flavor as you would expect as a supporting player. It is ably assisted by the plum and peppery perique, which I found to be a little less stronger than some others have noted, though it pushes to the front from time to time. When it does, you're certainly aware of it, though it doesn't hit me in full force as other blends I have smoked. The nic-hit is mild to medium. Won't bite or get harsh. The taste level is just past medium. Burns cool and clean with a small amount of inconsistency in the flavor. Leaves just a little moisture in the bowl, and needs an average number of relights. Has a pleasant after taste. Not an all day smoke. Three and a half stars.

I like this blend. Paul is correct, there is definitely a camp fire quality about this blend. Contrary to the official description, there is just enough Perique in this blend for this taster's palate. It didn't knock me off my feet, but it does always satisfy my urges for Perique every time.

My last order from The Smoker was for seven blends that I had never tried before with St. James being one of them. I had to try this blend first mainly because the blender's description of the the tobacco included the warning "This one gets ya". A casual examination of the tobacco revealed nothing sinister here, just a mix of red and bright Virginias with a sprinkling of dark flakes of Latakia and Perique. The first light is dominated by the Virginias with just a hint of the Latakia and little spiciness from the Perique. At this point I wondered what all the fuss was about then at the mid point of the bowl WHAM. The Perique really comes on strong and does in fact get ya. From mid bowl to the bottom the Perique overwhelms the other tobaccos and the overall smoking experience becomes one sided. My curiosity got the better of me so I did a little reverse engineering of the blend. I found that it contained approximately 1% Perique. Now that may not sound like a lot but your tastebuds will think otherwise! That being said I still enjoy St. James on occasion (after a steak dinner is best). Definelely not an all day smoke and don't even think about it on an empty stomach. As would be expected it has a very pungent room aroma. If your wife is sensitive to tobacco smoke you may want to consider moving this one out to the tool shed.

A very nice full latakia and perique blend . Great for outdoor activities such as camping , hunting , fishing and hiking . Has that campfire nostalgia feel to it . Highly recommended to the full english lover .