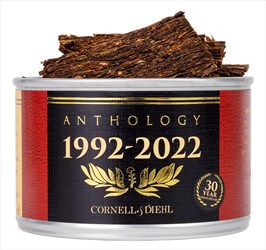 An expertly crafted, commemorative mixture, Anthology 1992-2022 is the culmination of 30 years of evolution and expertise, showcasing the interest, passions, and themes of Cornell & Diehl over those years. Elevated by many of C&D's favorite components — including the iconic SM2-18 and TA-20 Carolina Red Virginias, 2003 Bijou Virginias, top-tier Canadian Brights, as well as genuine St. James Parish Perique — this special-edition mixture highlights the blending house's unique approach to the Virginia/Perique family, delivering a naturally sweet, bready profile with notes of zesty citrus, rich stone fruits, and figgy spice.

Notes: Anthology 1992-2022 is a glowing testament to the synergistic working relationship that C&D has cultivated with farmers and tobacco merchants over the years, especially with a single Perique farmer in St. James Parish, Louisiana — illustrating the benefits of growing, harvesting, and processing authentic Perique according to precise, time-honored methods.

The various red Virginias have steady competition from the Canadian bright Virginias. All of them produce a wealth of tart and tangy, mildly sweet citrus, grass/hay, vegetation, bread, some floralness, a modest amount of dark fruit, earth, wood, sugar, dry sour lemon, and light spicy, vinegary, acidic notes. The Saint James Perique offers a fair amount of earth, wood, tingly spice, dried plums, and a hint of dried figs as a supporting player. The overall strength, including the nic-hit, are a step past the medium mark. The taste level is a notch past that mark. It won’t bite or get harsh, but it does have a few rough edges. The broken flakes are mildly moist, and need no dry time. Deeply rich, it burns cool, clean and a tad slow with a very consistent tartly sweet and sour, spicy, floral, zesty, slightly acidic flavor that extends to the lingering after taste. The room note is a bit stronger. Barely leaves any dampness in the bowl, and requires a couple more than an average number of relights. Not an all day smoke, but it is repeatable for those who want a VaPer with some punch and depth. Three stars.

Cornell and Diehl Anthology 1992-2022- I really like the C&D style of Virginias that have that slighly rough , rustic strong taste . They have a very natural taste . I get some sweet sugar and fruity spice also . A little Vinegar tart and floral notes . I tend to like Virginia blends that have Red and Brights . Just the right amount of Perique for me . 4

The tin note reminds me of Parmesan cheese. It’s a pungent, fermented, yeasty, musty, smell. Some dark fruit and tangy citrus. Pretty moist, in fact I’m not going to jar it but leave it in the tin. Broken soft flakes that break apart with some effort as they are moist.

The flavor… bready, yeast, sourdough, some tangy citrus fruit, some lemon tartness, and plenty of dark fruit. A bit of hay, but no grassy fresh flavor. Fair amount of sweetness. Almost no peppery tingle which is to my liking. Even on the retrohale. The perique C&D uses is phenomenal, it’s more figgy than peppery. This is different enough from CRFwP to be worth while getting. I’m so glad I did. It is slightly one dimensional, but a consistent and nice flavor. Hardly an after taste. Little harshness, or mouth tingle, and no bite. Room note around non pipe smokers drew no complaints. Lots of relights but some dry time will help with that. It smokes slow, nic hit is probably past medium.

Looking forward to this aging as no doubt it’ll be great.

This one really clicked for me. I tend to find other C&D blends lack subtlety, but not this one. The Virginias have both sweetness and depth. There is just enough perique to keep things interesting without dominating, and it presents itself with dried fruit sweetness and mild spice. There's a lot going on here that hits you as the bowl progresses, from fruit, bread, honey, red wine, and a rich chocolate note that becomes more prominent as the bowl progresses.

I actually dreamt about this tobacco the night after my first bowl, and promptly ordered more tins the next day. I had low expectations but this one lived up to the hype, and then some.

This one is definitely a close relative of red flake with perique.. Although it is considerably softened by the bijou virginia as well as the dose of brights.. while the red tips still come through very distinctly, this is really well blended to deliver a very well rounded and approachable yet complex enough va/per.. Jeremy Reeves has certainly come a long way in recent years.. Cornell and Diehl despite the criticisms it occasionally gets is undoubtedly releasing many of the greatest and most pure tobaccos amongst its perhaps over extended portfolio.. but we are lucky for it.. other than the Mac Baren HH series we have nothing else like this.. at least in the states.. A well done 30th anniversary release.. And this perique is fantastic.

Tin note was kinda nasty. I was expecting a nice fruity smell but was met with a certain mustiness and a hint of vinegar.

This blend has little to no tangy/citrus/vinegar notes. I get plum & fig fruit notes along with nice bready notes. This blend is slightly sweet and a joy to retrohale. Composed of 12% perique, the perique is not always present but is very welcome when it comes around.

The broken flakes come pretty moist out the tin. I dry mine for 30-60 mine before smoking. There is no bite with this blend, and it is well behaved.

Honestly one of the best VA blends I’ve smoked in a while. I’ve been looking for a darker virginia blend that’s like the polar opposite of Orlik Golden Sliced’s light tangy floral citrusy characters. Anthrology bangs.

I’m gonna say something crazy, but I’m not even mad that I have less than 50 grams of McClelland’s christmas cheer left. I have Anthrology to back me up!

I enjoyed it, but after I went past the first quarter of my bowl. The tobacco is nice, but nothing to be excited about. I had a sample by sheer chance because I usually tend to avoid Virginia leaf, and I thought it was OK. If it was up to me, I would have had more perique, but the rest of the ingredients combined quite well. I did not detect any bright virginia, but I am not sure if it had any. The red virginias were grassy with hay-like notes, but I guess I missed the aged and cellared aspects of it. To my palate, it just tasted like one of your ordinary and day-to-day smokes.

Sweet with hints of tang and spice, raisins and dark chocolate. Probably could have used a bit of drying time but was too anxious to try it…multiple relights. Medium in strength and above medium in flavor. Nic hit is about medium at most. Very enjoyable.

Age When Smoked: A few days-straight off the truck

Although broken, the blend includes a few bigger, nearly whole, flakes. The mix is rather dark in colour, with a few sporadic lighter flecks. Mine is a little moist, not ''wet'', just how I like it.

For the initial smoke I get more spice from the Perique and can identify, easier, the sharp, bright Virginias. The Perique's spice quickly dissipates and it takes on a richer, fruity, flavour, with the opulent red Virginias taking the first place in short time. The marriage of these flavours creates a VaPer which has very little zing, but heaps of lavish, almost fruit cake-like flavours. It feels a ''heavier'' VaPer on the palate, if that makes sense. It burns perfect, the smoke's cool, and after a day smoking it I've had no tongue-bite.

There is perique and then there is perique. Well actually there is Acadian perique and St. James perique. Acadian is a blend of some St. James blended with other leaves. Now Cornell and Diehl has the only truly produced in St. James perique. And it’s only theirs. I believe the first blend to use it was the Small Batch Carolina Red Flake w/Perique. The fine print says “genuine St. James perique”. Anthology is the second. Vinegar. An oft used term when describing va/pers. I get none of it. Just a wonderful aroma that keeps me sniffing the tin. Smoking is sublime and will only get better. PS. Not sure if it has 12% perique or 12.5%. I stand corrected on usage. CRF/W perique was the first. It has been used since then in any blend with perique.

Loading: mine came as a broken flake, I was still able to fold and stuff without issue.

first third: the perique is definitely noticeable and almost the front runner for a brief moment. Mellows out and is, in my opinion, the perfect amount for flavor. The main flavor is spiced figs with a musty straw background, but not in a bad way, reminds me of the hay barn at the end of summer. Feels peppery on the retrohale and produces a thick, creamy smoke.

Second third: Flavor really evens out. The citrus begins to poke its head out just a bit. The pepper of the perique is still noticeable but has now become more of a condiment. A mild yeasty flavor has also shown it's face, not like sourdough, more like home baked white bread. stewed figs and stone fruit are also present.

Final third: The flavor has become a bit monochromatic, but isn't disappointing in the least. The only way to further describe it is just as a good, quality, VaPer.

Final notes: could use just a hair bit of dry time despite it's feel from the tin. Overall I suspect this blend will become a gold standard with some age on it. I am not generally a virginia smoker at night, however I think that's the time that it fits best, might also do well on a cool autumn afternoon. I'm certainly glad that I obtained several tins for aging and look forward to trying it again in a few years. Not an all day smoke, but could be repeated once or twice throughout the day if given time between. Nicotine was definitely noticeable, but not overbearing, throughout the smoke.

Age When Smoked: less than 1 month

Thank you, Jeremy Reeves, for an expertly blended Vaper showcasing some of C&D’s flagship tobaccos. Balanced is the key word here. Nothing overshadows anything else. Wonderful notes of matured hay, sweet and tart citrus, figgy, jammy dark fruits, occasional caramel and honey notes, and a perfect dash of white pepper. Smooth, creamy smoke with no bite. My only regret is not getting more than two tins. It will be challenging to let the 2nd tin get a few years of age, but that should be well rewarded. 4 stars!

My goodness this is good tobacco. A solid VAPer that is worth getting your hands on if you can find it! I’m enjoying tin 1 of 2 and somewhat regret not getting more to age. So smooth and flavorful. Makes thick smoke that smells divine. Rich sweet earthy flavors of Virginia leaf complimented by the hint of spicy Perique. Fabulous stuff.

I can use few words to say something about this tobacco: for me the perfect Vapor with red Virginia. Probably one of those, few ones, could be posed at the some quality of English virginia blends best selection

Four star medium flavored Virginia. Equal portions of sweet and savory. While the taste is medium, the smoke has a full bodied aroma. Stellar all day blend from Jeremy Reeves.