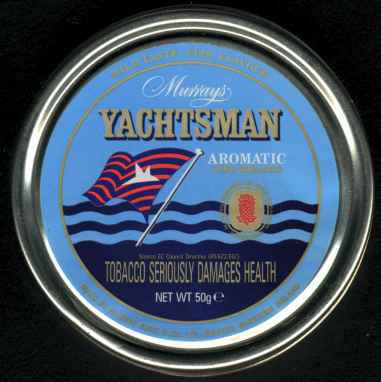 A fine continental cavendish mixture enriched with honey, with a sweet aroma. Rapidly increasing in popularity. The blend has been recently upgraded to give a brighter appearance and smoother smoking.

This is the Orlik version:

Yachtsman is a lovely and somehow unique semi-aromatic without cavendish. If someone here remembers the yellow Orlik Honeydew, I would argue that the honeydew melon flavour they used in that one is exactly the same here, but there's also a discreet layer of something which is very reminiscent of red liquorice - you know the strawberry kind of stuff - but very discreet.

Leaf is pure bright VA, with a little burley. Presentation the same as Astley's 55. I find this very light in flavouring and it has a peculiar dusty, nutty aroma when lit: probably burley. It's not very sweet, but not cigar-like either. Somewhere in between...

Pack it ever so light and smoke it slowly, very slowly or it will bite and turn acrid.

I you do manage to be patient, Yachtsman will reward you with a cool, pleasant and interesting smoke. It really needs attention.

Fair amount of nicotine. I love it and will sample more.

Too bad Yachtsman is no more. I had one tin in my cellar and just recently decided to pop the top. I'm glad I did. Yachtsman is a little stouter in the nicotine department that most aromatics, and delivers some true tobacco flavor to boot. As was the case with most Murray's offerings, the leaf was top shelf and the topping was, too.

If you happen upon a tin, smoke it in the afternoons when you crave a little sweetness with your smoke. It is just a little to ripe for breakfast smoking and probably won't raise your nostril hairs in the evenings.

After the few reviews, mostly negatives, I was quite a bit scared to open this tin !

Then I did out of curiosity and the first impression was: hey, what the hell, this is not bad at all! Very promising tin aroma, some molasses/honey, but with light hand. Light in colour, this is prevalently Virginia with some Burley. The cut is a ribbon of the like of the Dunhills. Takes fire very well, burns very nice and never insanely hot nor bitey. The flavour is nothing of contemplative, just as good as a companion for every day. In fact the tin is over after four days, and I never felt bored. The sweet casing compliments the VaBur.

I would see this as my all day smoke, but can understand there is much better tobacco to smoke for everybody.

Purchased From: received as

Similar Blends: something of the like of Benson & Hedges Mellow Virginia (of old) and Gold Block.

As much as I love non-aromatics in the daytime, VaPer's and VaBur's normally, I often enjoy a sweet aromatic after my dinner. I needed to open a fresh tin and I felt quite compelled to pop this one as it get's quite a mixed reaction on here.

The contents of an opened tin weren't exactly what I expected: it's brighter than most aromatics; it looks like any Cavendish in there is golden, not black. I like the aroma from the tin as the honey seems quite strong. It's too moist and tightly packed, I like to loosen it up a bit and let it have a short amount of airing to reduce the moisture that's gathered.

Yachtsman ignites with ease and then gives off a smoke that marries up to the tins note perfectly. The honey is, without doubt, the main flavour that I can taste; it doesn't seem too false though. The only problem I get with the added taste, is after about half an hour it develops an acridness which doesn't agree with me.

With the tobacco's, it tastes like a straight Va. If there is any Cavendish in there, it's confused with the honeys sweetness; I can only identify a Virginia grass note along with a very light nuttiness; maybe this has a touch of Burley as well?

I get quite a mild nicotine dose from this; nothing too silly, but it wouldn't qualify as being much more than mild, for me.

When I lit my first bowl of this, I could see this becoming my regular aromatic with a possible lunchtime position as it's not too gloopy; but, as I said, on my palate it develops an astringent quality after a while .

I think a fair rating is two stars.

I tried this once, and once was enough. This is tobacco is truly awful. It's suposed to taste like honey but comes across like a horrid artificial concoction made by plastic bees. I've been eating honey since I was a small boy and I've never ever come across bad honey until now. I've tried many different tobaccos and this is the only one that I can say I actually hate. The wife said it smelled like burning tyres and banned me from smoking it in the house. Avoid.

I dont know what to think about this one, i purchased a tin online expecting a blend produced by Murray......then upon arrival i relize its another failed attempt by orlick to copy old blends. Upon opening the tin, the aroma was that of wet leather and possibly some slight sweetness(maybe honey)the blend is comprised of rough cut bright virginias and thats it, i couldnt see any cavendish cuts at all. It took alot to light it and keep it lit. Now i enjoy good quaility virginia blends, but this wasnt one of them, the flavour wasnt sweet at all, more dull and bitter. The smoke was very strong and almost overpowering, the nicotine will whip you into shape as well. I never had the pleasure of trying the original, but im sure it was better than its copy-cat.Try it to say you tried it, you may have a taste for it but i dont.

Says made in Belfast Northern Ireland by Murrays on the lid, and then says made in Denmark by Scandinavian tobacco group on the base, so I guess that means its definitely made on Earth.

This is to oranges what Gold Block is to lemons, and Blue Ridge is to limes.

This is the closest thing I have ever smoked to Gold Block, it smokes in the same way and even looks the same type of leaf and cut. A sweet and sour sweetened Virginia like fat cut roll your own tobacco.

To smoke its like a Pimms and Lemonade cocktail aromatically ,and a citrusy sweet and sour grassy Virginia with a minor hayish burley maybe. Its got more of a Virginian bias than gold block . I would get faint burnt honey a hazel nuts from time to time.

Yachtsman though very similar is easier to smoke than Gold Block - it doesn't bite on the job and so it doesn't need a side drink as a tongue barrier. Gets a bit more concentrate and cordial near the bottom of the bowl in an almost candy shoelaces type of taste at the end. The taste carries through to the end with no dead spots ,its consistent down the bowl.

A single bowl session doesn't bite - an all day session might leave you bitten maybe - but having a side drink on hand might prevent the possibility.

Smoked reasonably cool for its cut and type. You will either like it or hate it I recon. As an aromatic its my type of aromatic when I am in the mood for that type of tobacco. Its not an extraordinary or complex tobacco by any means and probably qualifies as an average experience that wont blow your mind.

As a boiling hot summer day smoke for on the balcony that doesn't clash with the type of drinks you might likely be drinking in such a heat; its a pleasant smoke that wont annoy anybody.

Purchased From: The Pipe Shop Southbourne

Ok. Not my kind of tobacco at all but oddly I quite enjoyed it. Smoke it slowly, maybe whilst doing something else and it's not bad. The flavour is OK, it isn't strong, but then not everyone likes a punchy smoke. Sounds critical but by not bad I mean not bad.

Age When Smoked: From Tin

i had high hopes for this tin of tobacco,but sadly for me it was a let-down. tastes of nothing..and its boring..no enjoyment at all,it may suit other pipe smokers..but sadly not me.

This is a tobacco completely lacking in distinction. The (rather artificial) honey-like fragrance that you get when you first open the tin doesn’t carry over into the smoke, which tastes of nothing at all; it’s also very hot, partly because its lack of flavour and body makes you puff too hard to try to get something out of it. If this blend has recently been upgraded, I can't imagine what it was like before. I can't think of a single redeeming feature that one might mention in mitigation of this underwhelming stuff (apart, perhaps, from the fact that it comes in a nice tin). A waste of money; very definitely not recommended, unless you like a tobacco that is totally without character or personality.

Not a lot more to say about it. Left my throat feeling a little rough. Odd, for such a mild tobacco...

Sigh! I bought a tin of this a year or so ago, because I recalled smoking it some years before and really enjoying it. What a disappointment; it manages to combine blandness with fearsome tongue-burn. I had to add about half a ton of pure Latakia just to give it some flavour and slow it's burn down.

Maybe it's just rose-tinted spectacles, but I really do remember liking this one in the past. Has the blend changed?

Avoid it, and try a decent aromatic. Or anything at all!

Awful. This is truly an awful sickly artificial tasting blend

This is a wonderfully cool tobacco that though mild in all respects can still be surprisingly satisfying. As I find with most aromatics there is a slight medicinal smell in the tin. It packs well and lights with ease and maintains a good burn throughout.

The smoke is well balanced with a light sweetness that is in keeping. Very smooth and a good choose for earlier in the day. This tobacco also works well if a little cigar leaf is added for later in the day smokes.