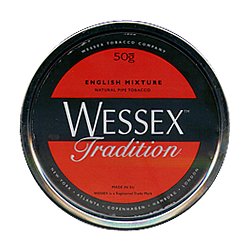 A medium English classic with red and black Virginias, Turkish and latakia.

This blend is put together extremely well with excellent balance. One of those blends that you can enjoy as a whole yet taste the components individually. Orientals lead the way but not by much, the Virginias are there and quite sweet yet rich just right by me, and the Latakia is present all the time but gentlemanly. The tin-nose is naturally sweet very much so, Virginias and of course the Orientals really pop with nice bass-notes from the smoky Latakia.

It reminds me quite a bit of Old Limey Bastard in terms of balance and sweetness, this one even sweeter. Of course no Orientals in the B&B blend which I really really like in Tradition. A bit sour too; sweet and sour, aged balsamic vinegar comes to mind.

Watch the moisture on this one, too dry and it looses a lot becoming flat without balance of course too moist then too much steam. I found a bowlful spread-out on some paper for 10 to 15 minutes was just to my liking. Tin fresh it's a tad too moist and combustion preferences may vary.

This blend stays the course all the way down the bowl, although the last 1/3rd is everything ramped-up; even better. Some tins will be added to the cellar.

A very natural tobacco taste with a lot of balance, I take my hat off.

The Turkish leads the way here by just a nose. The Virginias have a strong presence and equal the Latakia in strength of flavor. Smokes like a somewhat sweet Balkan to me. Very pleasant and enjoyable. A solid blend. Medium in body and flavor. Moisture is just right. Burns great. Usually just a one match smoke. A very firm 3 stars.

A superb Medium English that has to be put on your list to try. The tin aroma smells fermented,and mellow. The naturally sweet red virginias, and black virginias really marry with the Latakia and the turkisk presides over the two ever so nicely. It has a more natural tobacco sweetness playing along with the smokey Latakia that really makes this a charmer. Puff it like a cigarette and you'll burn your tounge. Relax and enjoy the tobacco and you'll be adding it to your favorites. It burns clean,and has a white fluffy ash. (English Pipe tobaccos go good with Scotch) This one really does.Enjoy.

King Weed's "similar blends" annotation got me to chuckle a bit as I had the same sort of thought.  Wessex Tradition strikes me as a run of the mill sort of blend in the sense that it's neither spectacular nor powerful on any level, but yet at the same time it has a lot going for it.

The bowls tend to start off with a dry woody flavor that recedes in varying degrees as the other flavors kick in.  The turkish (mainly smyrna it seems, maybe also some yenidze) leads by just a shade over the latakia (cyprian).  Not the sweetest english I've ever smoked but there is some sweetness and also some spice, both in taste and mouthfeel.  Flavors include the aforementioned dry wood, some leather here and there, hints of campfire, notes of rye and even a bit of broiled steak especially after a dgt relight.

This is a flavorful, very well balanced and fairly smooth smoking blend.  It could be someone's "sleeper" english.  For me, it won't be a solid staple but I'll pick up another tin or two from time to time.  Not quite a four star offering but a very respectable three.

A mid sized ribbon, equal parts black, brown and medium brown, of a good moistness, and free from twiggy pieces. Personally I like the unlit aroma.

This isn't a Lat-Bomb, it's a more rounded smoke than that. The Latakia and Virginia form the support for the Turkish tobacco, with rich, smoky wood and grassy notes. The Turkish has a slightly floral/fragrant character to it, and is easily the leading flavour. The burn from Tradition's a good one, slow and medium temperature, and I get no tongue bite.

Tradition? A good quality blend, but subjectively speaking I'd rather there be more Latakia in it. Somewhat recommended:

I bought three tins of this blend from a guy on ebay in the spring of 2013. I put one of them in my personal hoard and set the other two aside. I then began to ask people if they remembered this blend from the recent past. Some said no, others said they weren't sure and some said yes but couldn't really say what it had smoked like. My thought was, wow, this is not a very good situation. So, I put a tin on my 2013 NASPC table and it didn't sell. I did the same at the 2014 St. Louis show and it didn't sell, nor did it sell at the NASPC show that summer. It finally sold at the 2015 NASPC show, proving that there is somebody out there who would buy it and they come along about every two years. I donated the second tin to the 2016 St. Louis silent auction. I opened the third tin recently and found a darkish brown and black tobacco that was not dry, but had lost some of it's essences over the years. Both the tin aroma and the smoking aroma was of a light to medium English that smoked in an acceptable, but unenlightened manner in the top third of the bowl. As we crossed over to the middle third, a wonderful thing happened. The Virginias and the Orientals held hands and the Latakia sort of danced around them and created a rich and full sweet spot of four star caliber. Had that effect continued on down the bowl, I would have been very happy and regretted selling the other two tins. Reality is that this sweet spot lasted about four minutes and when it was gone, it was gone for good. It never returned in the bottom third; which ended the smoke on a dull and flat note. So, if I were grading this blend on the tin smoke, it would be a two star deal. But, just as with the C&D Haunted Bookshop that I reviewed recently, I discovered that WT was much more useful and satisfying as a blending ingredient and that allowed an elevation to three stars.

Similar Blends: pick any fence straddling light/medium English from your past that also smoked rather mild and you're there.

If this is a true traditional English Blend I have mixed feelings about it. The first bowl I smoked yesterday impressed me. When I smoked a bowl today I was not as impressed. It smokes very clean, very nice white fluffy ash, for those of you that like your smoke to be consistent...... this is going to be the one for you. For me this would be a mood smoke. I wouldn't take it out of rotation, just may skip it and come back to it most of the time. Very nice flavor of dark chocolate, a little honey, and add a drop of vinegar to cut the sweetness a little and give it a kick, yet smooth and consistent like a dog with it's master.

Despite the blend description which seemed very promising, an English blend in the Scottish tradition, this is an overly cased English tobacco typical of mainland European manufacturers. The casing has an almost mouthwash and bitter herbal quality which I can't stand but, fades a bit with time. The blend is predominately the virginia base with the other leaf varieties towards the back of the bus. Get rid of that casing and increase the other condimental elements and there might be something worthy here.

Well, the best I can say about this is it's not bad. I guess there's a nice taste of Latakia, but the Virginias seem kind of flat.

Yet the worst I can say about it is that it isn't great. This is a bit rough around the edges. It's fairly straightforward. It's unlikely to get any reaction, good or bad, from anyone who smokes it.

The tobacco burns fast, and burns hot. It isn't very good. And it doesn't suck.