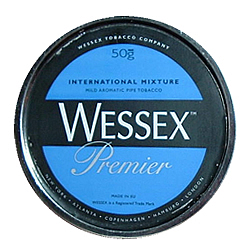 The Virginias provide some citrus, earth and grass, along with light dark fruit. The sugary black cavendish is in-between being a condiment and supporting player. Generally, I find hazelnut toppings to be light in effect, but this does tone down the tobaccos a little in spite of its lack of richness. A couple of times, I noticed a slight chemical note. It’s slightly syrupy, too. The strength is mild, while the taste level just passes that mark, but both recede a tad in the last quarter of the experience. Hardly has any nicotine. Won’t bite or get harsh, and has a touch of creaminess. Burns cool and clean at a reasonable pace with a mostly consistent sweet flavor that dulls at the finish. Leaves some moisture in the bowl, and requires an average number of relights. Has a very pleasant, short lived after taste and room note. An all day smoke. One and a half stars.

Wessex Premier is a very typical Danish aromatic. Blended from Virginias and black cavendish, the tobacco comes packed on the moist side; the appearance is of brown and black. The flavor of the blend stays pretty consistent through the bowl, providing a cool and surprisingly dry smoke. The taste is, to me, overly sweet, though I find that most Danish cavendish blends are too sweet. The hazelnut topnote is more apparent in the room note than in the taste, which really seems to have more of a sugary, vanilla flavor than hazelnut. As with many such blends, the cavendish portion of the blend is what drives the smoke. Many Danish cavendishes, however, are overpowering with the syrupy sweetness imparted by the processing of the tobacco. While the cavendish taste is definitely strong here, it's not so overwhelming as with some others. Fans of Danish cavendish should find this to be one of the better blends on the market. However, those who prefer natural tobaccos would most likely prefer to avoid this blend.

The above description of this tobacco is not correct. I also am not sure if the other reviewers had the same blend. This is the blue sticker, "International Mixture, Wessex Premier" that I am reviewing. The back of the tin has a lengthy description of its contents, consisting of, and I quote, "full bodied black cavendish" "sweetish broken" (whatever that is, but I believe they were refering to the burley), and "golden virginia". This blend touts itself as "medium strong" in the description, and topped with a "vanilla-nut-maple" topping.

Not a whisper of hazelnut to be found here. I bought this blend hoping for a frangelico or dekupyer hazelnut topping, like what is on Sir Walter Aromatic, but on a different tobacco perhaps, as I really enjoy hazelnut. I have smoked quite a few pounds of home grown tobacco doused in vodka in which hazelnuts have been soaked. Even stronger than the mentioned liquors, once the flavor develops from a long infusion.

On opening the tin, it took about a millionth of a second to identify the topping as walnut. I said to myself, "what do we have here?"

What I found was a very, very mysterious smelling blend, which at the same time smelled in the genre like your typical danish blend, which this both is and isn't. The quality of this leaf is much better than most other blends I have seen, and is easily on par with anything from Sillem's, Reiner, or Solani, which produce a lot of my favorite aromatics.

Upon lighting, I was even further mystified by how, after so many years of smoking a pipe, an aromatic could have both a strong tobacco flavor, and topping that worked in perfect blended conjunction with it. As I smoked down the bowl, I could taste tobacco, a rich one at that, but at the same time, walnut, maple, and vanilla in that order of intensity. All working in perfect harmony with the strong tobacco taste.

The room note was another mystery, in that it is incredibly good smelling to others, more so than most other aromatic blends I would recommend for room note alone. It smells like all the scents of autumn, and I daresay there is even a spice element in this blend.

Nicotine is a whisper over mild, but this is a full body tobacco taste. More tobacco flavor than I have tasted in an aromatic blend thus far. The maple is the maple sugar, not the maple syrup style, and the walnut takes the front.

While faint, the opened tin will steadily scent a room with a very rich, but not strong, sweet smell, which oddly enough, is just a hint at the robust tobacco.

I don't find aromatic blends to be complex by any measure generally. I most smoke English, Scottish, or Lakeland flakes/ropes/plugs. I do like an aromatic late at night, and so far this is easily the most complex one I have ever tried. When I think I have it figured out, a new flavor is already present, then another, then another. All working in harmony. All combined with strong tasting tobacco. This is as complex as a latakia mixture, but has no hint of smokiness, just earthiness in different degrees working in perfect harmony with the toppings.

Not only is this a 4 star blend, it is a must have for my regular rotation. I plan on storing plenty of this high quality mixture. This is what the standard danish mix should taste like.

Reading the reviews of this underdog tobacco made me think it was one of the worst smokes on this site. Not one 4 star rating? Not even 3 star! Jeeez...

Wessex calls this blend "slightly aromatic". Forget that. It's an aro. Black Cavendish & natural Virginia heavily topped with hazelnut, vanilla and maybe caramel though vanilla is the dominant of the flavors. Overall, I like it for what it is.....an aromatic.

It burns slow, cool, evenly, left no dottle and it doesn't bite. Those factors alone should earn it 3 stars. It is a little damp on opening so dry it out for an hour or so.

I've experienced better blends but I certainly had worse(C&D Shandygaf comes to mind even though I like Burley, Oriental blends).

If you like Vanilla/Hazelnut blends, I can't see why you wouldn't at least try Wessex Premier.

If you have smoked blends in the Lake District genre, you'll be familiar with Premier (yes, I know it is Danish by description, but it is scented to my palate- TEHO).

Dark in the tin, with an even mixture of brown, mahogony and black. It is almost a broken flake or medium-long rough cut. Moisture is fine for an espoused aromatic. Tin aroma requires little to catch, as it fills a room upon opening the twist-style, flat tins lined with ruffled paper that makes loading less messy than the de jour pop-tops.

Toppings of Hazelnuts and fruit essences are pleasant enough, but really do not survive lighting. As was said previously, this is tough to light and to keep the smolder going.

Taste is light at the beginning and never gets beyond medium. No real nicotine hit, sorry if that disappoints you. It is in the puffing that the Lake District, scented flake presence arrives and stays, fairly subduing the genuinely decent leaf.

Not bad and somewhat recommended, just not what I was looking for by the tin description.

Think of this as a "ribbon" of Best Brown Flake No. 2 by Gawith & Hogarth topped ever so insufficiently with Hazelnut.

Like the previous reviewer, I was woefully underwhelmed with Wessex "Premier", and I wasn't even expecting very much. The ingedients sounded like a viable hunch but this blend didn't seem "blended" at all, just tossed in the same tin. Though the tin aroma was powerful enough the taste was mostly of not-so-good cavendish interspersed with eruptions of possibly shoe polish. Very unpleasant and, obviously, no stars to Wessex for this concoction.

Not a fantastic blend for me. It hits you like a mac truck when you open the tin. The casing is very strong. The tobacco is mottled with lights and darks.

It packs well but took quite some time to get it lit. The room note was nice so my wife says. I couldn't taste the casing very much while smoking. It was there but in the background. The tobacco was ok and I will finish the tin but I don't think I will get another.

Tin description: ''Black Cavendish and sweetish Broken and Golden Virginia. Refined by a vanilla-nut-maple flavour.'' Slightly different/newer to the write up here, but definitely the right blend.

The coarse ribbons have a very sweet, slightly nutty aroma. Good haruspication for the forthcoming flavour. It contains more brown and light brown Virginias than black Cavendish; about 75/25%. My tin had exemplary hydration, befitting an immediate smoke from the tin.

I get a more-than sure aromatic flavour. The vanilla and maple take the leading slot, creamy yet sweet, with an underlying nutty flavour; pleasantly 'coarse'. The tobaccos are prominently constructed of Virginias. Bready, almost pastry-like, yet zesty and 'crisp'. The black Cavendish adds to the sweet maple, but as the toppings are rather heavy the Cav' isn't too sure of itself. The burn's steady, smoke is fairly cool, but it can issue a bite when pressed to do so.

Premier? A very enjoyable aromatic that only loses a point due to the bite. Recommended: