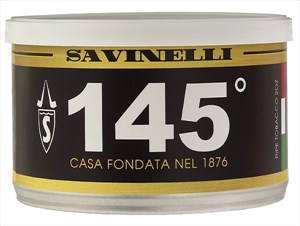 Handcrafted in partnership with Cornell & Diehl, Savinelli’s 145th Anniversary blend is a unique, cake-cut Virginia/Perique mixture designed to showcase the marque’s Italian heritage. Spicy, piquant perique elevates a base of matured bright and red Virginias, enhanced by double-fermented dark-fired Kentucky from the Tuscan Tiber Valley region of Italy — a location recognized for its 300-year history of tobacco cultivation. Redolent with notes of chocolate, dark fruits, and a hint of citrus, Savinelli’s 145th Anniversary is a distinctive Va/Per with excellent balance, its underlying smokiness pairing exceptionally well with a caffè ristretto.

The very spicy, earthy, woody, tartly plumy, very sour perique is one of the leading players whose spice and plum content surpasses that of Kentucky by a couple of steps. It has virtually no sweetness despite the presence of the tart plum. The double fermented, very fragrantly floral, peaty, smoky, slightly sweet dark fired Kentucky provides plenty of earth, wood, herbs, some spice, nuts, vegetation, and sourness along with a mild essence of barbecue, and slight cigar and bitter cocoa notes. The Kentucky leads the other varietals with the exception of the aforementioned stand out attributes of the perique. The fermented, matured red Virginia offers a lot of tangy ripe dark fruit, earth, wood, vegetation, bread, light sugar and vinegar along with a couple pinches of spice. It’s a couple of notches above the condiment level. The properties of the matured bright Virginia are tart and tangy citrus, grass, bread, some sour lemon, floralness, light sugar and acidity in a condimental role. Not sure about the topping, but it's very mild, and lacks sweetness. The strength and nic-hit are a slot short of the center of medium to strong. The taste threshold is in that center. It won’t bite, but it does sport a few rugged edges. The loosely held together cake easily breaks apart to suit your packing preference, and requires no dry time. Deeply rich and well balanced with nuanced complexity, it burns cool, clean, and slightly slow with a very consistent spicy, floral, mildly smoky sweet and rather dryly sour, savory, punchy flavor that translates to the pleasantly long lingering after taste. Leaves little dampness in the bowl, and requires a couple more than an average number of relights. The room note has a little potency, but not enough to scare away the neighbors. Not an all day smoke, and is more for the repeatable for the veteran than it is to those less experienced in blends of this genre. Four stars.

I stopped by the club the other day and PKT had purchased this limited blend, (1313/2500). This was a ‘soft’ kake that rubbed out easily with a hint of fruit in the tin note. There is no flavoring listed in the description but I wonder if it was not cased with something. This one is hard for me to describe. It smoked cool, sweet and produced quite a bit of smoke while puffing. I did not pick up much Perique but in all fairness only smoked a couple of bowls. As I did not pair it with a caffè ristretto, a short shot of espresso I cannot say whether it would have tasted better. All in all, a good blend and if you would like a more detailed review, see the one below. Thanks, PKT for sharing.

The smell from this is one of the best I've had from a natural blend, fruity, rich, beguiling, The single block of kake breaks apart easily and is just how I like it; moist but not wet. Because of the pliability of the kake loading couldn't be any easier.

The flavour's awesome. The Perique is definitely in first place, but is more fruity than spicy. This means the smoke isn't too caustic. The red Virginia pairs perfectly with the Perique, an extra hit of fruit! To me, there's more ripe red than sharp bright. The Kentucky is unquestionable; smoky, musky, savoury, but slightly ''soft'' and not too abrasive. It burns very well, medium temperature, bite-free, and consistent.

Nicotine: above medium. Room-note: not the best!

Opening the tin is like opening a box of liquor-filled chocolates bombons. The liquor aroma is sharp and intense on the nose, also with hints of ripe fruit, almost past. It comes with a level of humidity one and a half steps higher than fair, so the kake crumbles very easily and makes it pleasant to the touch to handle. After a few weeks of opening the tin, that humidity disappears and then the tobacco improves because it softens a little and reduces its amount of humidity, being able then to load it directly from the tin to the pipe. The coverage is light to medium level and makes this tobacco very perfumed, but in my opinion it also causes the natural flavors of the tobacco to come through. I have read that the 145th uses the type of Kentucky produced in Italy, similar to that of Sansepolcro, from C&D and that I have not tried yet. The topping looks like liquor, cocoa and some vanilla. I smoke it sporadically since its intensity in aroma and flavor produces some saturation in the senses. However, if the day is favorable, it is pleasant to smoke. One of the best things I can say about 145º is that it is different from what I have smoked so far.

The tin note is bread and figs/raisins. Its pressed into a nice cake and it is easy to pull off a piece and crumble it in your fingers. The bright and red Virginias, perique, dark-fired Italian Kentucky are well visible. The tobacco was moist, but not too moist. I did not dry it. It packed well. In fact, it was very easy to pack, no struggles at all getting the perfect pack.

I was also amazed at just how easily this lit and stayed lit. I really didn't need a charring light. Given the ingredients, this should be right up my ally. I love VAPERs and Dark Fired tobaccos. I was so confident I went deep on this one, 20 tins. Don't want to fall in love and not be able to find it again.

I smoked several bowls and it's hard to describe the smoke. It has a light flavor and really didn't taste like most VAPERs or Dark Fireds I smoke. I really like Bayou Morning, Sansepolcro, and HH Dark Fired and I was expecting it to fall into that realm. But it didn't. Based on other reviews, I knew it was going to be on the lighter side. Ok, it should make for a nice light afternoon smoke and it had my favorite ingredients. It almost has light sweet cocoa/vanilla quality, as though it had been lightly misted with sugar and cocoa/vanilla topping. The perique was very light, the Virginias were there, I didn't really notice the barbecue I typically get from Dark Fired Kentucky.

The first time I smoked it, I thought my taste-buds were compromised/overpowered from the cigar I had just smoked. The second and third times, I smoked it after dinner with no compromise to my taste-buds. Still didn't taste much like a traditional VAPER or a Dark Fired. If anything, it had a quality similar to a light, well behaved, aromatic, and if it had been described as such I would have known what to expect. Its like being told you going to eat strawberrys and then you are given watermelon (I like both, just not what I was expecting).

In summary, to me, it tastes like a light well behaved Virginia based aromatic with a lightly applied sweet cocoa/vanilla topping, with a hint of figs/raisins, and a hint of smokiness in the distant background.

145th Anniversary Blend is another good one from Savinelli, but I don’t like it quite as much as their stellar, similar, and more complex 140th Anniversary Blend, which was also made for Savinelli by Cornell and Diehl. My tin of 145 is dated 04-16-21, number 892 of 2,500 tins. Whereas 140 was ribbons, 145 is a tight cake of gold, red-brown, mid-brown, and dark brown bits pressed firmly together. 145 Varietals include flue cured yellow and air cured red VAs, Perique, and “double fermented, dark fired KY from Tuscany”. I suppose the second fermentation takes place while the already-fermented Sansepolcro is pressed into the cake. Tin note is a little sharp and tangy, yeasty, earthy, sweet, bready, citrus-y, meadow grasses and flowers, moldering dark fruit compote, a little damp earth, and some sort of fairly proof-y spirits that dominate initially and for some time thereafter. Though I can’t certainly identify the spirits, I like the idea that it’s special, Anniversary grappa. Apart from the booze, the overall smell is fairly restrained but also “latent”, in the sense it suggests there’s more to come during the smoke. And so there is. I pinch a wad off the cake, spindle it, and stuff it loosely into my pipe, and it lights and smokes right down, no problems. It blooms nicely from the get-go. The Perique is forward of the KY, and both take a backseat to the dominant VA, and the lot smells and tastes like an expanded tin note, with the booze opening up to become more fragrant and “grape-y”, and there is more fragrant wood and earth, along with faintly smoky pecans. Again, to my tastes, the mature, first quality VAs are the backbone of this blend, both sweet and savory. The Perique is sour, and the KY is bitter. Strength builds to over medium, with the nicotine trailing. Tastes are between medium and full. Room note is a shade better than tolerable. Aftertaste is a long trailing off of the best of the smoke.

I regard Savinelli’s 145th Anniversary Blend as a first quality smoke best suited to experienced pipers. For those who have tried 140, 145 is spiced with Perique vs. Orientals and it adds booze. No doubt 145 will age nicely until 150 is released. Despite any putative differences, 145 worked best in the same pipe that best presents 140. I give 145 3 stars, vs. 140’s 4, but it’s a close call. Watch this space.

I love this blend. It has a great floral aroma and flavor with the perfect balance of Virginia and perique with a subtle cigar presence. I bought 6 more tins to age

I picked up a couple of tins when this was launched as I'm a fan of Savinelli and really enjoy a couple of their other blends.

The crumble cake is easily broken apart and makes loading and lighting a breeze. I get a dark fruit flavor that leads the way with a little background sweetness.

It smokes really well in my 321s which usually prefer flakes and provides a good smoke level without an overpowering amount of nicotine. It's really good after dinner in the evenings matched with a sweeter drink.