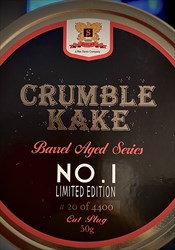 Choice Virginias from three continents are heat pressed then matured for 30 days in an aged apple brandy barrel before being pressed again and sliced into old-fashioned plugs. Each plug is tinned to preserve the blends rich, oaky, and naturally sweet flavors.

The various Virginias provide a lot of tangy dark fruit and tart and tangy citrus, grass, hay, vegetation, earth, wood, plenty of bread, sugar, mild floralness, slight acidity, and a couple pinches of spice. The sweet and tartly sour apple brandy topping moderately sublimates the tobaccos, and has no artificial or chemical notes. The strength is a step past the center of mild to medium. The nic-hit is in that center. The taste is a notch past the strength level, and just falls short of the medium threshold. Won’t bite or get harshness, and only sports a very few rough edges. This moist plug easily breaks apart to suit your packing preference. You may want to give it a light dry time. Burns cool, clean, and slow with a very consistent, deeply rich, fermented sweet and mildly tartly sour flavor that translates to the pleasantly lingering after taste, and room note. Leaves little dampness in the bowl, and require some relights. It’s an all day smoke for the veteran aro smoker, and repeatable for the less experienced. This is a limited edition of 4,400 tins. Three and a half stars out of four.

This comes in one big plug that breaks apart very easily into ribbons . I smoke it right from the tin as I think the moisture is perfect . No bite whatsoever. Very tangy and sweet . Fruity with baked bread and slight vinegar. A little citrus and hay and floral notes but more of a red Virginia flavor . The sour apple topping is there the whole bowl . I don’t get much of the brandy . It gets better at the bottom of the bowl . A nice smoke . 3 stars

The bright, tart, sweet, hay like Virginas are toned down with an oaky wood flavor. Dark bread, spice, earthy hay, it’s pretty good. I don’t think this is topped or cased but rather infused with an apple brandy from the oak barrel it was aged in as I don’t pick up any artificial sour apple flavors but a little apple notes on the retrohale. The retrohale is nice for a Virginia blend. A darker but natural sweetness. If Virginias are for summer this is for the fall. Smoking next to a camp fire with a brown ale and this is very enjoyable. Leaves a stronger after taste but it’s not bad. A little mouth tingle but that’s to be expected. Does not bite.

I’ll smoke this on a cool fall night anytime . I hope it smooths out and sweetens up with age. Next fall I bet this is even better.

It did. Really like this blend after some time.

A new version of Sutliff’s Barrel aged series, all of which so far have been winners, and this one is no different!!!

To me this one is autumn in a bowl!!!

Processed in the same multi step way as the others and like the others pretty delicious! A nice mix and balance of sweet with tang and a lot of good variety of flavors from the different Virginia’s with some of the tartness and all the sweetness coming from them as well. They kick in a bit of lemony citrus, dark fruit with a touch of fig, and date and more with bread, hay, and more including some spice but it’s all just the tobacco! This is I guess technically a aromatic because it does have an added flavor from a non-tobacco source, but unlike the typical aromatic it’s not applied directly to the leaf but it makes itself known. The time in that apple brandy barrel brings in for me one of my favorite flavors of fall, sweet-tart apple but in a way that’s so natural it doesn’t mask the tobacco at all really. Even though it’s a brandy barrel the essence doesn’t seem very alcoholic, just good! Smokes cool and does not bite, I smoked in two completely different shaped bowls, a big Neerup Churchwardens with a deep straight broad bowl and it tasted great and lasted a long time, it Burns slow and requires a few relights smoked without drying. It left some moisture in that huge bowl but not much and two swipes with a pipe cleaner handled it over almost 2 hours of that one bowl!!! The other was my smaller Brebbia Churchwarden with a much smaller tapered bowl, which I think tasted even better but still long, cool, zero bite and little moisture. You might give it a bit of a dry but either way the rewards worth it! It’s good from light to ash with that sweet slightly tangy flavor throughout with the sub flavors of spice, grass adding substance in the background so not boring! Considering the 2 plus hours in that big bowl this could be an all day smoke but would make a wonderful treat a few days a week and if my legs worked better I can’t think of a better thing for a lunt in nature this time of year...I will try and make do with finding a nice bench or seat and enjoy the autumn out side and in the bowl!!! Four out of four stars for this one all the way!

I really enjoy apple cider and Applejack so I was really looking forward into diving into this one.

The tin-note is def apple sweetness, but not overpowering. It's a traditional Sutliff Crumble Cake which means it is easy to break up into chunks or ribbons as you might prefer. I usually put a few smaller chunks in the bottom then top it off with more finely prepared ribbons.

Moisture from the tin is just a little moist to my liking but after opening the tin and smoking out of it for a few weeks it gets to perfect for my taste. Lighting usually requires a couple of tries after the charring. Once lit, it requires a few relights at my smoking pace.

The apple taste is present through the entire smoke, but it doesn't completely cover up the taste of the base Virginia tobaccos underneath. The apple brandy comes across a little sour to my taste, which works well with the sweetness of the VAs in the background.

It produces good clouds of nice smoke which my wife says has an apple smell. The strength of the tobacco is mild to me with mild-med nic level which means its easy to enjoy a couple of bowls in a session without ill effect.

I'm always sort of sad when I find a tobacco that I like in a limited run as I worry that I'll not be able to find it again. Hopefully they bring this one back in the future so I can cellar some.

Sutliff’s Crumble Kake Barrel Aged #1 follows close on the heels of their Crumble Kake Red Virginia, being another simple, deliciously sweet VA that adds a subtle-but-insistent scent and taste of baked apple. CKBA1 is darker and denser than CKRV, but “dense” is relative here, and it’s no trouble to pinch some off, load, light and smoke down a bowl, as the tobacco turns out to be very crumbly, like leaf mold. Still, it looks and smells like a small chunk of holiday style brown bread in the tin, and it tastes like that, too, fragrant, bready, a little earthy, yeasty, old hay-ish and sweet, also vaguely sour, with faint but distinct baked apple in the air and on the tongue. If there was booze in there, it’s long gone. Keep it cool or risk minimal acrid taste from combusted apple stuff. As for the apple, I was wondering how they manage to infuse the apple brandy/cider smell and taste evenly through all the tobacco in the barrel. I suspect the lot gets spritzed with a solution before tinning. Whatever, it works for me! Strength doesn’t quite make it to medium, with the nicotine trailing. Tastes are medium. Room note is pleasant. Aftertaste is a nice, lengthy trailing off of the best of the smoke, very sweet.

Sutliff’s Barrel Aged #1 is a nice, VA-based aro for fall. Here’s hoping we get a mulled cider version for the Holidays! It gets a bump for being an original aro, so 4 stars. It ghosts my VA pipes but it's worth it.

Age When Smoked: from the tin

This is a very interesting tobacco . A crumble cake infused with apple brandy . The flavorings are lightly applied and the apple brandy comes through for the entire smoke . Although it is listed as an aromatic the flavoring is just enough to be placed in that category . Real nice tin note . The crumble cake is real easy to work with , packs well and with ease . The virginias are decent enough for today's day and age . The down side is that it burns way too hot . It also irritated my throat that is not usually sensitive . It leaves sort of a chemical after taste that is not easy to get rid of . Since I smoked in 20 degree weather that might been a factor but I had the same experience when I smoked it in my car . If you are looking for a lite aromatic this might do the trick for you . Sutliff seems to be making some better tobaccos lately .

''Barrel Aged'' inculcated me with the idea of either a bourbon or rum flavoured blend. But, after cracking the tin, a whiff of the kake eradicated that idea from my mind; apples were clear in the note. The dark brown kake, with a few specks of yellow, breaks apart easily into ribbons and isn't too damp to smoke right off.

The name's half right, it's missing a word; apple. It should be called Apple Crumble Kake, it tastes like the Apple Crumble's we'd have for dessert on Sundays! I don't get much alcohol from the barrel processing but I get a clear taste of the fruit. This, with the doughy, sweet Virginias, causes a flavour incredibly reminiscent of that Sunday treat! I can't complain about the pragmatics, it burns steady, slowly, giving a cool smoke.

Crumble Kake Barrel Aged? I wouldn't have expected to enjoy a blend flavoured with apple brandy, but this works perfectly. Highly recommended:

Age When Smoked: Bought when released

This is not really an aromatic. I mean technically it is, but that label tends to be associated with drugstore blends, cherry whatever, or syrupy cheap burley blends. In fact Sutliff makes a few of those itself. BUT...this is not that. This is rather terrific and like the whole Crumble kake series, it is excellent and very high quality. It reminds me a bit of the old McClelland Navy Cavendish, and of friebourg and trayer's Special brown flake. This is essentially red virginias aged with brandy. They list apple, too, so maybe its apple brandy. I have no idea. The taste of the liquor is mild and doesnt interfere with the tobacco taste. The nicotine level is a bit past mild, but it smokes very cool. No bite whatsoever. This is a welcome but limited edition. I hope they make more.