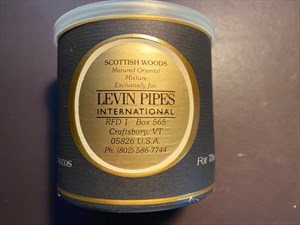 Recently, I was fortunate to snag a 1993 tin of this fine tobacco. As a fan of McClellands CPCC Scottish Woods, I wanted to compare it to this blend, now 27 years old. As others have noted in reviews of almost-impossible-to-get tobacco blends, why post one? Personally, I believe this web site serves as a repository of info about all pipe tobacco blends, and in itself that’s a fine reason to post this.

On to my review...the tobacco is more of a fine shag cut as compared to the ribbon blend of McClellands CPCC Scottish Woods. The blend was mostly dark, and the Orientals/Turkish, and fragrant aroma of Syrian Latakia were noticeably front and center; Virginias were hardly noticeable. Oddly, I found this blend less flavorful than McClellands later CPCC blend, making me wonder if there was a storage issue with the tin over the years. (My comparisons are based on McClelland CPCC tins from 2009, as well as 2010).

This is a solid Oriental blend. Virginias serve as the base blended with the Orientals, and a healthy dose of Latakia, but as I mentioned above it is the Orientals/Turkish and Latakia that dominate. I found it a mild smoke, light on the nicotine, with a pleasant room note. Packs and lights easily, burns cleanly to a fine grey ash. The Latakia seemed noticeably stronger than in latter blends, and that uniquely woodsy, leathery Syrian aroma, flavor and room note was omnipresent.

Something I can’t quite put my finger on led me to give this a three star rating, as I found it less enjoyable than McClelland’s later blend of Scottish Woods.