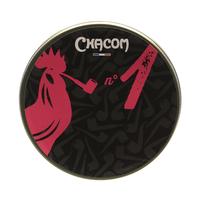 Chacom's #1 is a mellow English mixture comprised of Virginia, black cavendish, and Oriental tobaccos with a touch of latakia. It's an easy-going blend that can be enjoyed any time of day.

This is the second Chacom blend I've tried. After trying Chacom #2 (Plum aromatic) and really enjoying it... I decided to try all the "#" Chacom's. Opening the tin, I actually thought I mixed up #2 and #1 at first... not because #1 has any plum scent, but just because I didn't smell any of the typical "English" smells. It is a tad sweeter than the typical English. It smells good though.

Lighting up, it tastes like a slightly sweet light English blend too. For an English blend, the Virginia sweetness is fairly upfront. It has a nice spiciness too - what I usually think of as that mysterious Oriental spiciness... a sort of sour or faintly musty flavor. After the first few minutes, the sweetness mixes really nicely with the spiciness of the Orientals and they come together perfectly. There really isn't a whole lot of Latakia in this blend, but that's ok... it gives the other tobaccos room to spread out. And there's enough to really help enhance the Oriental flavors.

I used to consider myself a Lat-heavy English blend guy. I love Quiet Nights and Artisan's Blend and Nightcap... but after smoking Savinelli's Essenza Cipriota, Presbyterian, and this blend, and loving them all, I'm starting to think that a ton of Latikia isn't always necessary for a great English blend. Without too much of the sometimes heavy-handed Latikia, there's a chance to taste all the other stuff going on. This is a really nice, complex, sweet and interestingly spicy blend. Chacom is really knocking them out of the park so far.

Bottom line: This is a fairly light, but still complex, sweet, and spicy English blend that's re-writing my idea of what a ideal English blend should be.

This blend feels perfect for this time of year, Autumn. A touch of Latakia to ''warm the bones'', but not a Bomb; by any means. After a few puffs I ordered more!!

The blend's made up of mostly medium size ribbons, about 75% brown and light brown, the rest's black, and the woody but slightly tangy aroma's most inviting.

The flavour's led by the Virginias, fruity-sweet, and fresh hay. I find the Orientals are subordinate by a little, but give a wonderful ''dry'', yet herbaceous flavour to the smoke. The Latakia and Black Cavendish are the lightest additions. The Cav gives a slight creaminess and the Latakia a subtle woody, smokiness. But this isn't a blend that's cartelized and ruled by sharp Lat'; making it a great bridge for the precipice between the warm summer and freezing winter! It burns nicely, not needing much attention. The smoke's cool and doesn't bite.

Chacom #1? This was made for the Autumn! Four stars: