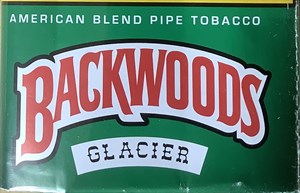 Pouch text: This pipe tobacco is very easy to handle due to the special cut. It is made of selected Virginia, burley and Orient tobaccos that are blended to achieve the typical American blend tobacco.

Notes: Apparently, this or a very similar blend is/has been sold in the EU as "Backwoods Glacier".

I never had very high hopes for this when I picked it up at the local kiosk as a new brand they'd recently received, having known Backwoods previously as a brand of cheap supermarket cigars, but I should have been warned off by the color of the wrapping and the 'cool' name. Foolishly, I thought "But surely no-one would mentholize a pipe tobacco...? Whoever would do such a thing? No, it can't be."

The vaguely minty pouch note and the uniform light-brown shag turned my mouth down, and the very first puff finally brought me to grim reality. I don't even know why they call it pipe tobacco (tax evasion? taking advantage of a little-known loophole in EU legislation?) as this is essentially menthol rolling tobacco - and not a very good one at that.

Literally the only pipe tobacco I have only managed to smoke only half a bowl and then immediately disposed of. That half a bowl ghosted my small Chacom for about 8 bowls afterwards, I kid you not, and the toothpaste-chemical menthol taste lingered in my mouth for the rest of the day. If I ever have pipe-smoking nightmares they're surely going to be about this abomination.

(Interestingly, unlike the other three in the Backwoods series - Forest, River, and Mountain - Glacier is not listed on the Mac Baren webpage. Even they themselves are too ashamed to own up to it?)