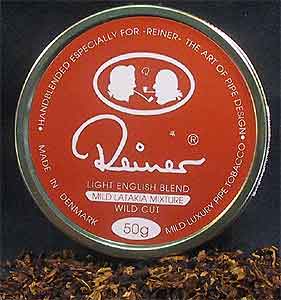 A light English blend of bright and dark Virginias, burley, black cavendish and a hint of latakia. A mild smoke.

This tobacco is loaded with Cavendish and light on the Latakia. Still, it does have some flavor and is pretty smooth. I can see where latakia fans might wonder "where's the beef?"

The leaf is rather chunky and the Burley element gives this one some American English charm. A cool blend that is unique in flavor. I rather liked it.

The first observation I made was just how soaked with tobacco oils the greaseproof liner looked. Although I've had it for about a year the staining pointed at the tin being even older. However, I can't be sure as the tin was minus a date stamp. It isn't a ribbon, it's more like a coarse cut/mixture; the tin says Wild Cut.

Strange flavour for a blend badged English. I fail to see how a blend as light as this on the Latakia can qualify as an English! So, the Latakia's the lightest element, the cavendish Burley and Virginia account for the most of the smoke. Regarding added flavouring I notice a strange herbiness which clashes with the softness of the tobaccos. This herby flavour lingers in my mouth afterwards. It burns at a reasonable speed, giving a cool smoke, without bite.

Nicotine: mild to medium. Room-note: Not good, not bad.

Light English? I can't see what crowd this would appeal to. It isn't horrendous, but nor is it too nice. That said, I'll give it two stars:

Age When Smoked: 1 year at least

Tina Aroma: Very dusky, a sweet undertone which cn only be the Cavendish.

Physical Characteristics: Light brown dominates, but not by much. The dark brown/black makes up about 40% of the blend. Some tendency towards clumping up in the tin, as well as during packing.

First Light: They call this a light english, but I believe I would place it in a medium English category, owing to the latakia and cavendish conmspiring to give this blend a bit more body and robustness than I was expecting from it.

Notes: This is a very rich and dark tasting blend, equally suited to a wake up call, or as an after-dinner smoke. However, the robustness of it comes mostly from the Cavendish, not form Orientals or Latakia, hence the 'Light English' moniker. I enjoyed the tin of it that I smoked, but doubt that I will purchase more. Though I do need a couple of light Latakia blends in my cellar, and my rotation, there is just too much Cavendish here for me.

The first thing I noticed is the tin aroma is certainly not your typical English...smells very sweet, maybe a maple casing. I see some rubbed Virginia's, what I think is rough cut Kentucky, and a splash a latakia. The tobacco is nice and dry, and was packaged in the "muffin cup" wrapping. Despite what the package says this is a straight aromatic, and at that, it succeeds.

I recommend this to the aromatic smoker who wants his friends to think he has stepped it up to English...

Tin note is sweet and spicy. The tobacco is coarse cut. The tobacco cupcake wrapper was brown and stained with whatever toppings were used. My tin may have been in the warehouse for some time. I actually found the tobacco very nice for what it is. Cavendish and spice forward. The sweet Virginia is defiantly there. I am not sure why they call this English because what little Latakia is there, is just in the background. The strange thing was I can smell the Latakia in the room smoke but barely taste it in the smoke. The spiced Cavendish and the Virginia's are driving the show. No tongue bite if puffed slow the flavors are much better as well. If puffed hard it has some bite and is much stronger. I like the tin I received and if I was sure the next tin was the same I would buy it again. Update on review I tried this again after letting it sit out and dry a bit more and I found it was much better 3.5 stars no bite at all just needs some drying time

I find this to be a fair tobacco. I must say that I normally smoke traditional full Englishes and Balkan mixtures.

This tobacco is clearly cased a bit. The cut is a little chunky, put packs easily enough and lights fine. Doesn't burn quite to the fine ash that I like, but is acceptable. The taste is good - clearly the Cavendish is present, and the latakia is just hanging around in the background. This would be a decent smoke for those starting to get a taste for latakia, but I think better latakia intro tobacccos are around.

What I smoked was fairly dry, about my ideal smoking humidity. It still smoked a little wet, and had more tongue bite than I am used to.

Aside from Long Golden Flake, I've never been all that excited about Reiner products. As has already been stated, this stuff is heavy on the cavendish, light on the latakia. If I was trying to introduce a rooky to latakia, I might recommend a tin of this, because there's really nothing wrong with it. It's just not that good.