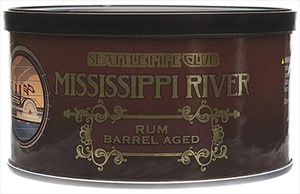 The constituent tobaccos are the same as regular Mississippi River. The tangy dark fruity, earthy, woody, bready red Virginia is a team player. The earthy, woody stoved Virginias sport a fermented sugary fruitiness, and compete with the red Virginia for attention. The smoky, musty, woody, earthy sweet Cyprian Latakia has an important support role, though it is close to being a lead ingredient. The perique continuously offers some spice with raisin and fig notes in the background. The earthy, woody, dry, herbal, slightly buttery sweet, spicy and sour, floral Oriental is also a minor participant, and not always detectable. The strength threshold is almost medium while the taste just hits the medium mark. The nic-hit is in the center of mild to medium. Won’t bite or get harsh, and has no rough edges. It is aged for thirty days in oak rum barrels, a chunk of which is placed in every tin. The rum moderately sublimates the varietals, and conjoins with them to create a deeply rich, sweet, mildly creamy and savory, consistent, complex flavor from start to finish that translates to the lightly lingering after taste. Presented in an easily broken apart crumble cake, it may need a little dry time. It burns cool, clean, and a little slow. Leaves just a little moisture in the bowl. It does require some relights. Has a pleasant room note. This aromatic English can be an all day smoke no matter what your level of pipe smoking experience may be. Four stars.

The idea of the rum barrel aging sold me on trying this one even though I was not over impressed with Mississippi River when I tried it a few years ago.

The tin note is English with the top note of rum. The tin contained large flakes of mostly dark tobacco. A little moist to the touch for my liking after opening. Flakes are easily broken up and dried nicely after a couple of hours.

Easy to pack. Easy to light. The initial taste had quite a bit of the rum in it. It tempered the smokiness of the latakia with a sweetness. Still plenty of tobacco taste in the background. Burned quite smooth in every pipe I tried it in so far. no tongue bite, but def a tobacco to sip. Nicotine level to me is mild-medium, you know it is there but it is not over the top.

I'd say this makes a great wintertime smoke for someone who wants something beyond a straight English. I prefer it to the straight Mississippi River for sure. I think I'm going to try blending the two a little as a way to use up the straight MR.

Man is this good!! Funny thing is I wasn't a huge fan of Mississippi River originally. It got much better with age, but for my taste, it was still a mid range English. Add this to a rum barrel and something special happens. I know this is categorized as an aromatic but I am not sure I would put it there given today's common definition of an aromatic. First the rum. The rum is very evident in the tin note, it is almost all I can detect. I get a sour note from the Perique and Oriental, I assume. The flavor is fantastic. I get a nicely balanced English, rich in flavor no one tobacco seems to run the show. Creaminess from the Latakia and Orientals, sweetness from the Virginia base and a hint of pepper from the Perique. The Perique is really not easy to detect to my taste but there is hint of pepper like spice on the finish that I assume is the Perique, the figgy flavor may be blended so well with the Virginia's that you cannot tease it out, but as far as I am concerned the hallmark of a great blend is the marriage of the flavors and this delivers in that department unlike most blends. The rum must add some sweetness and flavor but it is so well sublimated into the other flavors all it does is make the constituent tobacco's taste better... which BTW is what added flavors were originally intended to do, not taste like smoking a lollipop. Fantastic blend, probably a great intro for smokers that haven't dove into the English genre yet. Looking forward to the bourbon barrel aged version of Plum Pudding but I am afraid the bar may be set to high (I am also afraid it will screw up the flavor like bourbon barrels do to beer, IMO).

I ordered this last week somewhat by mistake. I actually wanted the bourbon and upon realizing the error of my ways emailed the company twice and even called the next day but the bourbon was sold out. Fine, no harm no foul, I signed up for the email notification. This undoubtedly has the nicest rum smell upon opening the tin. It smokes smooth and mellow. Some moisture built up in my Peterson 307 but it pretty much does with anything I smoke in that pipe. This is one of the most natural rum smokes I believe I have ever had and will take it in to the pipe club the next time I show. I don’t know if aging this would make that much difference, possibly. Also, for those who like to dry their tobacco this one was pretty moist right out of the tin. I bought two, one for now and the other for way later. If you like rum tobacco, I would definitely buy this one.

First of all, I wouldn't really call this one an aromatic blend. This is a light English blend with some rum aroma on top.

I really enjoy this blend a lot as it fills a gap that was previously somewhat unfilled. It reminds me a lot of Dunhill/Peterson EMP which is a very light english blend. This SPC blend is not as oriental forward as EMP. The rum aroma is very noticeable and supports the sweetness of the blend. Tastewise, bready Virginias take the lead, there is some oriental in the background, as well as the gentle smoke of the latakia. I didn't really notice the perique, it's definitely not the spicey aromas that you will find here, probably rather the fruity, plum lke notes. The presentation of the crumble cake flakes that rub out to something like a cube cut and the barrell stave are top notch!

My go to blend when I want to have something a little bit english that's also sweet. Perfect for the afternoon. Highly recommended!

The tin contains a partly broken kake (there's a few bowls worth ready to go), it's a very dark brown, and in the tin sits a cube of rum barrel. The aroma's commensurate with this; it smells rummy. The moisture suits me, a little damp, but I like that.

Behind the rum there's a 'deep' tobacco flavour. The fruity Virginias occupy the most of the smoke; succulent, sweet, and tasty. The Latakia adds an arboraceous, woody flavour, but I don't find it a smoky Lat Bomb. The Perique gives a definite nuance to the smoke, if you will a 'plum-like' character, but isn't on-top. The Orientals give the least flavour; to me. After half a tin I notice them, in the background, but I still find them a minor ingredient. The rum has more vigour for the initial part of a bowl, but after a short while the alcoholic piquancy abates, allowing the sweetness to rule; working perfectly with the Virginias. I haven't had any bite and every bowl has behaved well.

Nicotine: quite mild. Room-note: not great.

Upon opening the tin, sweet rum notes hit my nose. Could smell a little bit of a apple cider vinegar/sour type of note as well. Nice thick slices that crumble very easily. Left to dry for 2 hours...could probably go another 2. The rum "flavor" is noticeable in the first light, but quickly faded. I got more apple cider vinegar and spice notes until about half way through the bowl. Not unpleasant, but different. I will say that while I cannot taste the rum, I feel an alcoholic tingle from it while puffing away. It could be my cadence, the fact the I may need to dry the tobacco more, or the pipe, but every so often I get some liquid that will trickle out of the pipe and will hit my tongue and remind me of that apple cider vinegar/sour/tangy note. Kind of reminds me of a finishing sauce I make for pulled pork if I were to leave out the sugar. Every now and then I get cocoa notes. Towards the end of the bowl I began to feel the alcohol on the retrohale. Finished with a nice ash and no dottle. 2 relights. Overall well balanced enjoyable; however, I prefer Plum Pudding Bourbon Barrel Aged.

Easy to manage, wide cut crumble kake, comprised of dark brown tobaccos with a few specks of light. The tin aroma of a fresh can will blast you with a sharp rum ETOH aroma that I personally do not find offensive! Sweet, tangy, dark fruit and bready aroma fill the nostrils. As I stated, this blend breaks apart just by picking it up. The moisture level is perfect for immediate smoking.

Packing and lighting is a no nonsense ritual. Once lit, this blend is easy to manage and stays lit.

Just like the tin aroma, the smoke is earthy and woody, with a distinct rum sweetness. Toasty and bready, mildly complex. Figs, dark fruit, The room note is toasty and sweet smelling.

The last half the rum goes by the wayside, and you are left with a sweet and toasty Virginia with slight smoky notes from the Latakia. Another solid blend from Joe!

I ordered a tin of this blend after a superb experience with Plum Pudding Bourbon Barrel Age.

When you open the tin it seems that a bottle of rum has been uncovered. Tobacco crumbles easily and has a degree of moisture that leans to the high side but this does not prevent it from burning well. The initial flavor had a lot of rum but as the smoke progresses and the liquor disappears, it gives way to the component tobaccos of the mixture, becoming a smooth English mixture.

Being a tobacco that is rich, it did not impact me like the aforementioned PPBBA, among other things because according to my appreciation in this MRRBA the liquor hides more of the ingredients than in that one, but it is a very enjoyable tobacco. Three stars are the result of my subjective evaluation.