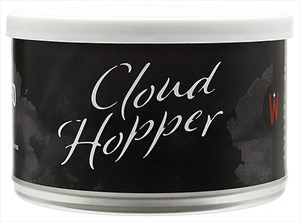 Notes: Known for their boutique, Cuban style cigars, Warped is curated and supervised by founder Kyle Gellis, an entrepreneur and lover of all things bespoke and luxurious. He has a taste for finery and approaches his ventures with rigorous standards of perfection that are applied to the slightest of subtleties. Such a mindset translated naturally when Warped expanded into pipe tobaccos in 2019, seeing Kyle Gellis collaborate with Cornell & Diehl's Jeremy Reeves to create nuanced blends, marked by quality components and intriguing flavor profiles that align with Warped's "be exclusively different" mantra.

Cloud Hopper, another creation by Gellis and Reeves, now joins Warped's selection of pipe tobaccos as a regular production blend. It takes its name from Warped's Cloud Hopper cigars, which Kyle made with his brother to celebrate their shared love for travel. Cloud Hopper pipe tobacco features AA-grade Dominican Criollo cigar leaf (the same varietal used in The Haunting), married to traditional Italian air-cured tobaccos, yellow and red Virginias, and perique pressed and cut into flakes. The blend transports pipe smokers to an adventurous flavor profile of complex notes of earth, spice, and citrus, while hints of cream and coffee offer comfort along the road. It's a mixture free of added flavors, meant to showcase the natural profile of quality tobaccos.

The peaty, woody, muddy, coffee-like, mildly grassy, vegetative, floral, smoky, leathery, cedary, lightly sour, creamy and spicy, herbal, tart and tangy citrusy, rough edged AA grade Dominican Criollo cigar leaf is the lead component. The spicy, raisiny, plumy, earthy, woody, stewed prune-like Louisiana perique is a strong supporting player. The red Virginia offers a bit of tangy dark fruit, some tart and tangy citrus, earth, wood, plenty of bread, and small floral, spice, sugar notes. It’s just below playing a secondary role. The grassy, tart and tangy citrusy, lightly floral and sugary bright Virginias also have a pinch of spice as a condiment. The strength is a step past the medium mark, while the taste is a slot past that level. It has a medium nic-hit. No chance of bite, but it does have a few rough edges. The flakes are a tad moist, but I did not feel the need to dry them. Burns cool, clean, and a little slow with a very consistent sweet, mildly creamy, moderately savory, lightly sour, spicy, floral flavor that translates to the pleasantly lingering after taste and room note. The latter aspect is surprising since cigar blends tend to be a little pungent. Hardly leaves any dampness in the bowl, though it requires some relights. Not an all day smoke, but it is repeatable. I suggest a wide bowl to fully capture all of the characteristics of the various flavors. Three and a half stars.

I was online browsing about a week ago and saw this one and bought it as it appeared to be something new on the market and different. This tin dated 12/16/19 is barely a month old. Upon opening the tin, I was greeted with some nice brown flakes with a distinctive sweet, slightly fermented sourish smell but in a good way. I asked the missus to smell this one and the only thing that could come to her mind was the scent of pears. Obviously, it is not a flavored tobacco but there is a sweetness to the tin note. I took a flake and folded it and rubbed it out between my fingers and put it into a cob. The first 3rd of the bowl I did not get much but then like turning on a light switch the flavors kicked in. I also got a little nose tingle which from past experiences is the Perique kicking in. The Criollo leaf which means ‘native seed’ really gives this blend a nice rich dark taste to the smoke. I really enjoyed and do not anticipate the tin lasting very long. The flakes were a little moist so for those who dry out their tobacco which I do not you might want to let it rest for a short period of time. Also, this is only the second time I have ever been the first to review a blend. Lucky me.

As the late Matches860 once said, an Ultimate Smoke can happen with almost any blend, depending on the situation, location, etc. That was the case with this.

I keep a selection of blends in my kitchen for various times of the day. VaPer: mornings, aromatics: evenings, etc. Having depleted my tray of a few flakes I wanted another on the go, so opened this a little 'blind'; just grabbed it, opened it, and read the ingredients after. Good job I never checked as if I'd have read it contained Cigar Leaf I wouldn't have bothered and would have missed out. But this isn't like most CL blends.

The tin holds more of a broken flake. Some still has a flake form but breaks up with the slightest touch. The nose is one of cigars but there's a more than obvious aroma of rich fruit from the Virginia and Perique. My moisture seemed perfect.

Now, the Ultimate Smoke feeling may have been partly caused by me being pipe starved a few days ago, and this being my first bowl of the day at about 6pm! That aside, it's darn good. The cigar leaf, although running things, isn't too dry or austere tasting. Yes, it's a CL flavour, but rather smooth and mellifluous. The red Va outweighs the bright, and along with the Perique, creates a very luxurious flavour of dark fruit. The bright VA gives a touch of sharpness but is more evident for the first five or so minutes. The burn's extremely reliable, and I get no bite. The only 'not so good' appurtenance is temperature: it can creep past medium when chugged. But, lol, an easy fix is don't chug it!!

Cloud Hopper? Like I said, even though I normally shy away from this genre it gave me one of the best smokes I've ever had. Four stars with delight:

Cloud Hopper is a swell blend from the Warped sector of C&D. They start with a first quality VA/Per, then they add cigar leaf. Their blurb also mentions “traditional, Italian air-cured leaf”, but I could not sort it out from the cigar leaf. There’s no Latakia, and there’s no mention of KY. My tin is dated 05-19-20. Inside the tin are broken flakes ranging from tan, to red-brown, to dark brown. Tin note is slightly musty, spicy, loamy, cigar-ish, some musty cocoa, mushrooms, dark fruit leather, bready, and figgy. I dry it some and loosely stuff bundled, chunky “ribbons” vertically into a cigar blend briar. It handles, loads, lights and smokes down just fine. As for tastes, to me, CH might be a good VA/Per with KY, or maybe Sansepolcro. The first taste up, that stays on top through the smoke, is the cigar-ish leaf. It is rich and dry, and mildly spicy, but not like a strong cigar, and the cigar spices are well melded and enriched with bakery spices from the Perique. The bright and red VAs alike also meld with the Perique, but on the grassy, fig and musty wheat bread level. Either the air-cured leaf tempers the cigar leaf, or the cigar leaf is mild for the genre. It’s taken a while for me to figure out that there are some subtle complexities here, but I tend to just puff away, because CH works very well for me as a blend. It’s well balanced enough to make it relaxing. Strength is just over medium. I pull until the tastes are more full than medium. Room note is tolerable. Aftertaste is a long trailing off of the best of the smoke. For all the cigar leaf, Cloud Hopper rather reminds me of a smoother HH Bold Kentucky. Anyway, it’s plenty good in its own right, and pretty sure it will age very well. It’s certainly benefited from rest. 4 stars.

The presentation is beautiful. Nice flakes and that earthy cigar smell. There is somewhat of a VaPer smell in there too, but it’s playing sidekick to the cigar smell. For me this is an all-day kind of blend. It’s never overwhelming, and for the most part, it’s quite round and delivers a relatively smooth experience. The quality is there.

Notes of bread, some fruit tang, bitter woody notes, bitter vegetal notes, earthiness. I got a distinct cumin note in there too. Never had that in a tobacco blend.

This blend is a worthy one. I like it, but not that much. It just didn’t seem cohesive at some points. You get notions like the band is all playing together, but they have a trumpeter that cuts off the solos from the others sometimes—like Shadow in Mo’ Better Blues (needed his own band).

I’m left with the impression that the blend is good, but not great because there’s that something that just isn’t right. It really evolves as the tin gets more air, and I would recommend it to anyone that likes Virginia blends, or anyone that is looking for a little bit of the cigar taste in a pipe tobacco. The nicotine is noticeable, combustion is good, and it behaves well. Give it a shot. It’s somewhat of an interesting one.

A rather creamy, woody (but not burning wood, a la Latakia) medium smoke. Like most C&D flakes, they separate out into long easily packed strands. The mild cigar leaf, Perique, and VAs meld together quite well, the most cigar-like thing (at least for me) about smoking it is the aftertaste. For those who like blends on a darker side but not looking for Latakia or another brown flake blend, this is worth trying.