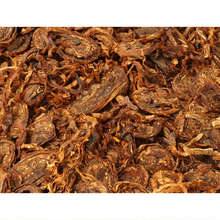 A combination of flue cured Virginias mixed with Mozambique dark fired tobaccos which are then spun into a twist format. The resultant finished twist is then cut into small disc ‘coins’ to produce a truly remarkable aromatic roll cake with a hint of maple.

Notes: Over one and a half centuries ago, in 1865, the two brothers, Samuel and John Gawith shook hands and went their separate ways to pursue their own dreams in Kendal. Both Sam Gawith and Gawith Hoggarth have co-existed in a peaceful, friendly but competitive way ever since. To celebrate the reuniting of these two legendary companies, they have come together to release the Reunion Series, an exclusive range of tobaccos to celebrate this historic unification.

For my Sunday smoke I normally opt for an aromatic; something insouciant and sweet! So, seeing maple listed as a flavouring I went with this. Unfortunately I never read the description thoroughly. It isn't a nonchalant aromatic, it's a potent smoke with a light topping.

I won't bother describing the appearance, you can see on here it's synonymous to Mac Baren's Roll Cake. The pouch note isn't indicative of much flavouring, it's more of a raw tobacco one. My pouch had good hydration to it. I took a pinch, ruffled it, and stuffed it into my bowl.

As I expected I struggle to identify much maple. Instead I get a fairly puissant, heady, tobacco flavour. The dark fired occupies first place, to me. The Virginia gives some support, but any grassy, hay-like, or fruity notes struggle to compete against the formidable Kentucky. It burns steadily, but is a bit warm and bites; well, it bites me!

Brown House Roll Cut? Although I enjoyed the Bourbon Flake from the Reunion series I can't say the same for this. Somewhat recommended:

Well this was a surprise. I reckon I've had 19 different Gawith Hoggarth blends; some I've liked more than others but all have been of a certain quality whether they have been to my personal taste or not. All except this one...

Although way too moist the tobacco dries well and the presentation in loose coins that easily rub out to a good ribbon was very appealing. There is however, an odd, hard to define but not particularly pleasant and not very tobacco smell from the pouch. But I didn't let that put me off.

Indeed, at the match is a nice, not overly sweet maple/Virginia flavour which initially led me to believe that the tin note could be ignored and Gawith's history of quality could be trusted. Unfortunately the pleasant maple topping quickly dissipates to leave only a bland 'tobacco' flavour, and from there it only gets worse.

The indefinable near-unpleasant tin note translates quite quickly to an indefinable quite unpleasant taste, which in the second half of the bowl is closer to burning cardboard than lit tobacco... Strangely, it is always good when exhaling through the nose, when the maple is revealed again, but the rest of the experience is poor.

Initially I thought this must be due to: The pipe - it wasn't; My preparation - it wasn't; Cadence - made no difference. I wasn't willing to give up and in all I tried 5 pipes of different shapes, sizes and producers (Peterson, Savinelli, Falcon, Carey, even Missouri Meerschaum - I wouldn't let it near my Nørding...). I tried leaving the coins whole, packing tightly, packing loosely, drying till almost crisp... Nothing I tried made any difference. Well, at least you could say it is consistent. And how many tobaccos can you say that about?

*Room note must be selected to submit a review to this site but it is not particularly strong and it is certainly not any version of pleasant. I plumped for 'tolerable to strong' - 'Intolerable' would be closer to the truth but that option is not listed.

Following on from Pipeologist's review - another Brit :) with more pipe experience than me - I felt that since I still had a little Roll Cut in glass, in the dark, I should give it another go incase I had been a little harsh initially. I wish I could say that my opinion of this tobacco from a genuinely legendary and ancient producer had changed. Neither my opinion of the company nor unfortunately, the tobacco has changed: Gawith Hoggarth are still wonderful producers but THIS tobacco is still, if not unsmokable, certainly unenjoyable. The one thing that has changed after a year is that the very odd and off-putting tin-note has dissipated and it now smells like a Virginia, but after the light, not much has changed for me. I hate doing it but I might just throw the rest out.

Similar Blends: A taste like no other... thank goodness.

Here comes the cavalry to save this one. Yes, it’s nothing to write home about, however, in my humble opinion, it does not deserve the beating it has received from my fellow reviewers. On the nose, out of the packet, loads of sweet Virginia. Not in any way discombobulated....eh ! Actually, I quite like this and I’m hard to please. A little damp, but so what. It’s tricky to get going , but when it does, really, for me quite a pleasant smoke. No bite, at all, which I hate, no grassy, hayey taste, which I detest. No Lakeland flavour, which I occasionally enjoy, not really present here. Do I get the maple, yes, but only just.This is a good tobacco, in my opinion , but not as pleasant as the other two Reunion offerings, I must admit. However, try it out and make up your own mind. Subjectivity will vary, I’m sure