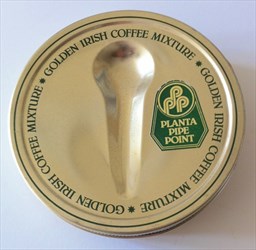 I split this tin with a friend. Irish Coffee sounds innocent enough for a tin of tobacco, but this tobacco is anything but that.

Reading the previous review I tend to agree - this tobacco is awful.

However, I have a further note: note only is the smell and fumes overwhelming, but there's a better description for the flavour than that of candy floss: Urine.

I don't mean this in a general derogatory manner, I mean, this tobacco tastes like piss. The flavour is the exact same as what happens when you pissed in the campfire in boy scouts. I see two possibilities: 1. This tobacco is too heavily cased and flavours, to the point where it's rank, or, 2. Disgruntled PPP employees urinated in my tin.

Was I to name the top three worst tobaccos in the world, this one would certainly be among them. Try to smoke anything rotten out of an old, moist basement where against all odds something starts to burn and you’ll get the idea. I believe it went out of production, which would be a relief. Protect you taste buds, …please!

The review is based on two tins, tried every other year or so for over a decade, till I finally threw them out.

Age When Smoked: fresh to 10 yrs

The smell from this doesn't suggest coffee at all, I get a potent blast of whisky but I can't detect any coffee, hey ho! The mix seems to need a small drying period, not ages but mine needed a couple of hours before smoking could commence. The mix looks to contain a higher proportion of Virginia to Black Cavendish, about a 75% to 25% split. I note how this doesn't get the best reaction however once lit I feel it's had a bit of a raw deal!

OK, it's not in the league of some aro's but I really don't think it's that bad! The taste isn't exactly as the aroma led me to believe, strangely I CAN actually detect some coffee, by no means does it construe what I expect from a coffee aromatic as it is a mild taste but I can without doubt notice it! Now, the whisky is exactly what the smell had me predicting it would taste like, there is no arguing with the fact this contains whiskey! Over to a less positive feature now, tongue bite, go easy or this will shred your tongue to pieces! Nicotine is quite mild in this, a big inhalation is needed for satisfaction!. As this burns down the slight coffee taste that was there at the start dissipates and gets overtaken by the whiskey, towards the end of the bowl it becomes a bit too much for me! The whiskey becomes too strong but there is also a slight caramel quality that comes through the longer it's smoked. To be fair, as the topping is heavy any tobacco tastes are left for conjecture to deal with, "was that Virginia or Cavendish ?" , it's hard to discern with such a casing!

I said at the beginning "I feel it's had a bit of raw deal" but I think with the vast array of coffee/whiskey blends on the market that two stars is a fair award!

This product seems so heavily cased in whiskey and not enough coffee. Instead of getting a coffee aromatic with some hints of whiskey, you get a full blast of whiskey in the face with subtle hints of coffee.

This is definatley the strongest aromatic I have ever tried, however the whiskey-coffee combination makes it smell and taste rancid. I gave it away and the person I gave it to, who would smoke anything threw it away. Definatley not recomended unless you like the taste and smell of one-week-old trash.

Stay away from this tobacco. I love aromatics. I have been a cigar smoker for about 15 years, and a pipe smoker for about a year. I wanted to try the Black Vanilla, but they were sold out, so I decided to try this one. HUGE MISTAKE!!! The smell is sickeningly sweet from the tin. Not a nice sweet smell of Irish Cream, for example, as I would have hoped, but an almost indescribeable "sweetness". Maybe like candy-floss?! The taste when lit became almost sour, as if the flavouring in this had gone rancid. I wish I could find something good to say about this tobacco, but I can't. Anyone want a tin?

I am somewhat surprised by the lack of interest and negative reviews in this tobacco, am I the only fan I wonder?

First off, I gather from other reviews that this tobacco was bought tinned. My purchase was as loose tobacco and I have to say that despite being a newcomer to piping.....and thereby having limited experience.....this particular blend is by far the best of many loose mixtures I have bought thus far.

That said, I could not taste coffee in this mixture (Irish or otherwise) but I could taste chocolate & whisky and as the pipe burned down those flavours developed to such a point that I was a tad disappointed when the smoke was over.....I wanted another straight away!

I certainly found this to be very full flavoured and not lacking in strength as others seemed to find, which leads me to wonder if perhaps the majority of pipers reviewing on this website might be American? I say this simply as from what I have read on several forums is that the American piper has very different tastes to us folk here in Blighty.

All in all a very pleasant smoke & one to which I shall return so thanks to Johnny at Newquay (Cornwall) for suggesting this particular blend.