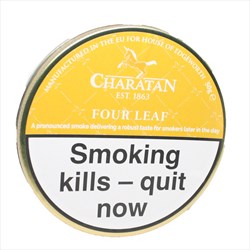 A pronounced smoke delivering a robust taste for smokers later in the day.

Notes: Equivalent to Dunhill Aperitif, Charatan Four Leaf is comprised of the ‘Scottish’ recipe that is cavendish, latakia, Oriental and Virginia. Sweeter than the average ‘English’ blend but not a dessert, these four leaves are perfectly proportioned. The smoke as a whole, is, as in the old Dunhill naming of it, enjoyable before an evening meal and also at any latter part of the day where the palate desires stimulation. The flavours are harmonised with no particular dominance of any one leaf, although you can certainly taste each type and may notice, for example, latakia in the fore if you tend not to smoke much of it.

Firstly, I've not piped the original for many years, so can only go from my notes.

Well, I and many other reviewers thought very highly of Dunhill's Aperitif. So like the other Charatan clones of Dunhill blends, this has big shoes to fill! How does it compare? Let's see!

Popping the lid reveals a blend with a few correspondences to the original. Same colour, same cut, same decent hydration, and the same aroma; a definite inclusion of Latakia. A bowl fills easily and ignites without a hitch.

The flavour's synonymous to the original. The first equivalent to jump out is that the Latakia adds a clear 'seasoning', but isn't too headstrong. On the whole, the tobaccos are really well rounded. There's rich Virginias (not too grassy, but quite fruity), piquant Orientals, and sweet Cavendish. I note, with Four Leaf, the first part of a bowl has a light sweetness from the Cavendish, but as the bowl progresses it seems more reminiscent of a light casing; honey, perhaps. It isn't the coolest burn; not 'hot', but above medium if pushed. However, it doesn't bite.

Four Leaf? Even though it can become slightly above medium in temperature, it's still fermionic enough to deserve four stars:

Next in my tour of Charatans Dunhill substitutes, to my taste the rhyming "Four Leaf" is a dull understudy to that fantastic blend, although I can't find any particular defects besides excessive moisture content. Maybe I would have felt differently if it had not associated itself with that splendid, complex tobacco, and it does fit the same place of a richer blend for late in the day.

The tin aroma is the first sign: there isn't much of one. It's a very mild, smokey, hint of orientals aroma, and certainly doesn't leap from the tin to greet you. The tobacco is an uneven ribbon with some big chunks, and is supplied very moist indeed.

The flavour from the light is unremarkable, middle of the road English, the sweetness from the Cavendish is not so great as in the Dunhill blend (strange, as several of the Charatan blends have been much sweeter than their predecessors). There's a salty tang to the latakia. In its moist state as supplied there is a tendency to harshness not quite reaching "bite" but not at all what I expected in a blend with Cavendish. It tends to gurgle a little. These defects are reduced now the tobacco has dried a bit, but it's not velvety smooth. I have to say, the flavour is better now its been open a while and dried out a bit.

There isn't much development through the bowl, and that's the main thing setting the original apart. When I smoked Aperitif, almost every bowl would catch my attention at some point because the flavour was just so good, so rich, sweet and delicious and it varied from start to finish. This tobacco, while inoffensive, just doesn't capture my attention like that.

It burns to a minimal wad of dottle, without much need for relights. It has perhaps a smidgen more nicotine than Dunhills Aperitif.

All in all, not bad, but not a great substitute for Aperitif. I'd rather enjoy my recollection of that splendid stuff than risk dulling those happy memories convincing myself that this is similar. Thankfully I have a tin of Aperitif left for when I need to remind myself just how damn good it was...