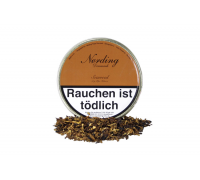 Notes: A predominantly light brown, rather short cut loose cut of golden Virginia and cocoa brown burley with a hint of black cavendish, refined with aromas of cream and caramel; quite gentle in the taste with a fine redolence.

Beats me why anybody would want to call their tobacco blend Seaweed. Sure, there are some odd names about (rather like ales) but I mean, Seaweed ?

What does that conjure up eh ? That soggy stuff you used to find on a Bognor beach when you were kids. Yuck.

Unlike the salty experience you'd be expecting this is basically a Danish with a few top coats of caramel and cream. The tin aroma is outstandingly sweet with an almost sickly fruity aspect covered in toffee. Toffee apple perhaps ? Well, not quite, more bazooka bubblegum with a twist of peach or pear.

The tobacco itself looks great as well. Light and dark browns that require oiking out with a knife or pipe tool as it's quite moist and compact.

But it's a Danish at the end of the day, albeit with some very pleasant aromatic qualities. It certainly isn't as crisp as say a Larson's mixture (like Belle Epoque or Green and Indigo) nor does it have quite the strength or taste of Davidoff's expensive Danish blend, but would make a reasonable alternative, given the price.

The smoke is hard work, although it IS quality tobacco in here , not rubbish, and it goes out a lot, probably due to the moisture level in the tin. Drying out would make a good pot-porri bowl in the lounge.

There's no tongue-bite, but then I can't see too many smokers actually getting to the end of the bowl. The taste stays, to lessening degrees, throughout the smoke and gives a quality burn with only a slight aftertaste.

It's a fair blend, oddly named, and somewhere near the top in the Danish stakes.

So the last Nording product I've smoked (and cellered for good reason), was McClelland's caramel/hazelnut Labrador, it had perhaps the most delicious tin aroma of ANY tobacco I've had the pleasure of crossing paths with. Seaweed gives off nearly the same fantastic sweet caramel notes, without the hazelnut, and tamped down with some grassy Virginia. Just having the open tin next to me, has my tongue wagging- it truly smells like a piece of candy.

The soft cut is fairly moist, yet not sticky, nor too damp to fire for you impatient drying types like myself. Gives off a fairly mild smoke that sadly is not as potent as the unlit stuff (which also happened with Labrador). While still sweet, the specific caramel morphed with a slight alcohol finish, but to be fair, tobacco physics could likely never maintain that wonderful flavor when smoked. Still, it was certainly pleasant, and no mortal could deny that open tin smell. Elevating a star into a 3.

Why they named such a delight; Seaweed, is beyond me, but don't let it lead you astray, this is one Aromatic to sink your teeth in.

Quite a rugged mixture, not quantifiable as ''coarse cut''', but inclusive of one or two chunkier pieces. The aroma gives a definite hit of caramel, a rather sweet unlit note. The moisture of my tin's irrefutable, so no airing time is needed. The description says just a ''hint'' of black Cavendish and the appearance is more-than conducive with this; there's very little black compared to brown.

The caramel comes through straight away, and is a few steps in front of the cream. The caramel and cream make for a kind of butterscotch/Werther's Original type of flavour; and there's a slight touch of chocolate, at the VERY back. The topping's are running the show, this blend showcases more added flavours than natural. The tobaccos are driven by the Burley, this ''coarse'' flavour is on top of the sweeter tasting Virginias; I don't get much of a grassy Va taste, the Va is a more sugary variety. The black Cavendish might as well not have been added. It can't really contend with the similar sweet, creamy flavours from the additives. A bowl burns nicely, very steady and only a bite when forced to do so.

Seaweed? It's a good aromatic, but IMO there's better aromatics that cost less than the £19 price tag of this. For this reason I rate it at two stars: