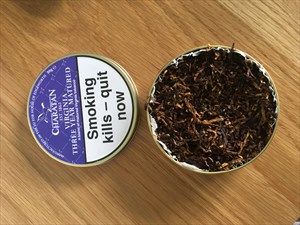 The Virginia Three Year Matured is a medium blend consisting of red Virginia and Oriental leaf. The Virginias have been matured for three years and are the base for this blend with a lightly flavored fruity essence.

I've never tried the original blend that this is supposed to be based on, so I can't say anything about any similarity, so I shall simply review it on it's own merits.

When first tried, as a small sample (three pipes worth) I was not overly impressed and considered it bitter and rough. However, after somewhat accidentally buying a 50 gram tin I had no choice but to give it a second chance. What I took for bitter and rough (meaning I smoked it too fast) was in fact a rich, deep, Virginia flavour of exceptional quality.

Well worth my accidental purchase and I will be adding it to me rotation.

The appearance is just like the original, a mixture of different shades of brown. The ribbons are even in size, medium, it doesn't include any twigs. Sniffing the blend implies it has a delicate, fruity, topping. The moisture makes it immediately ready to smoke.

'Sweet Virginia'. That could be the review! But, joking aside, the mild touch of fruit casing works perfectly with the naturally sweet and tangy red Virginia. It's these two flavours which lead in the smoke. Behind these is a slight freshness from the bright Virginia, and a touch of Oriental 'pizazz'. It's a refined, yet quite indulgent, flavour. The burn's steady and reliable, giving a cool smoke. I doubt it would bite even the most forceful puffer!

Virginia Three Year Matured? I really like it! Four stars:

I'll preface this review by noting that this is the only one of the Charatans Dunhill tributes that I did not smoke the original of. I'm rather wishing I had now: this is a tobacco that on first impressions when opening the tin, I didn't expect to enjoy quite as much as I have, but it turns out its rather good! It has a distinct, berry topping, but the underlying Virginia tobacco is of good quality and offers enough flavour that the overall taste is derived from a combination both the tobacco and its topping. Its been a real change of pace for me and I've quite enjoyed it!

Tin aroma: blueberry muffin! Berry aroma, sweet, bready and very slightly yeasty. The moisture content is at the upper end of OK, I didn't bother trying to dry it out but the last of the tin was a bit drier and smoked a bit better.

The flavour straight from the match is sweet and bready. As it progresses the taste of yeasty freshly baked goods increases. The berry topping only really joins the flavour around halfway through the bowl, starting out fresh, then becoming more of a cooked flavour like a blueberry muffin. It becomes quite strong towards the end of the bowl, and there is a noticeable dose of nicotine.

In its moist condition from the freshly opened tin it seemed to need some help to stay lit, with more relights than usual. The dottle got very wet in a Falcon, but wasn't too bad in an old meer. It has a very slight tendency to bite.

Overall I think it's similar to Peterson University Flake in its berry topping, but I think this is a much better smoke: more flavour, and more contribution from the tobacco itself. University Flake was like smoking steam to me, this is much more satisfactory.