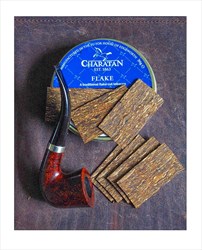 We are not exactly blessed in the UK, with the marketing geniuses from the tobacco companies withholding some of the choicest blends from our shores. Orlik, MacBaren and Scandinavian Tobacco amongst others produce some mighty fine blends that we will never see, so when an importer releases a new range of tobaccos, it would be rude not to try them ! Yes I know that this blend is supposed to be a match for Dunhill but it is also a fine tobacco in its own right. It is presented well with some beautifully made flakes in the standard round tin. A mix of bright and darker Virginias, with a subtle tin aroma reminiscent of sweet hay and raisins with some light baking spice. Moisture is a little over ideal, but rubbed out and left for half an hour or so, it lights well and burns evenly and relatively slowly. The flavour is on the citrus side of the spectrum, but with some bread notes added and a little spice for interest. Also some sweet raisin notes, but less dark fruit than Black Flake. It feels like it could bite if chased too hard but responds well to a gentle approach, as do most straight Virginias. There is no tendency to harshness and it is a really rewarding smoke. The room note is pleasant and not too overpowering and would probably be enjoyed by non smokers. I like Virginias and this is definitely one to try and has some potential for ageing, since if it is this good as a fresh blend, then it could be stellar with a few years on it. An easy 4 stars.

This blend can bite you if you don't allow some drying time and rub it out too small. I had only one unpleasant smoke from this tin and this when I did not stick to the usual advice. A full hour of drying time is not too much and it is easy to underestimate the moisture contained in some flakes. At perfect smoking moisture, there is little or no bite and much improvement in the flavour. Definitely one to sip gently and maybe use the "Breath" technique. Certainly not a blend to be rushed and it will give of its best if you save it for leisurely relaxed smoking.

Another blend I've been smoking for the tobacconist I write for.

Often offered as a 'clone' for Dunhill Flake? Well, big words! That was quite a revered smoke, so let's see if that's rhetorical nonsense!

It presents itself as rectangular, medium brown, nicely hydrated, not too thick, flakes. I usually fully rub and to do so with these takes no effort.

The moisture, and fine consistency rubbing achieves, enables simple ignition. From first light I get an upbeat, Virginia, smoke. For the first third it's a lemon, citrus, flavour which leads. Once the initial third has passed a honey-like sweetness joins in, somewhat placating the fervent 'zest' from the citrus. Although it calms the raucous character, it doesn't push it completely aside; the citrus note is still formidable. It burns at a medium speed, and after smoking over half a tin I haven't had a single bite.

Nicotine: medium. Room-note: not the best.

Charatan Flake? Well, as for it's resemblance to Dunhill Flake I can only go from notes here; which often state that as citrusy and sweet. So, that said, I don't think it's that far away! But, even though I can't smoke DHF to compare, I'll still recommend Charatan's version. It would be a smashing smoke for a morning in the summer:

Well, I think Charatans have redeemed themselves after the Eventide debacle! After comparing them side by side I find this nearly indistinguishable from Dunhill Flake, which makes me a happy man.

In the tin we have very neatly cut stacks of light brown flakes with seams of gold throughout. Aroma in the tin is mild, grassy and subtly sweet. It rubs apart in your palms with the same ease the Dunhill flake did, and moisture content is at the upper end of ok for smoking.

It takes a light with perhaps a little more work, but that may be my newly opened tin being a bit moist still. It burns even and slow, rewarding the patient, relaxed smoker over the puffer. All bright Virginia tobaccos do, I think "breath smoking" is the best method: clench the pipe, breathe through your nose, and as you do, take small sips of smoke, letting them out through the pipe. This brings out delicious bready, grassy flavours, with hay and a hint of dried fruit sweetness. To my taste, this flake has more of a new mown grass taste than the bread and hay of Dunhill Flake, that said its a fresh tin, it may be with age this becomes more like it.

It needs a couple of relights, doesn't gurgle, and smokes to a little dottle. It works very nicely in a large pipe, and I like to smoke these tobaccos in a Canadian. It can get a bit hot, although like the Dunhill Flake it doesn't seem to be a biter. Just put the pipe down to cool if it's warming up, it is delicious when relit.

All in all, a satisfying, mild Virginia flake, and to me, a perfectly good substitute for Dunhill Flake. So far, from a new, freshly opened tin, I don't get quite as much of the biscuity, bready, malty complexity that Dunhill Flake had, but this may be due to lack of age and relatively high moisture content. As such, for now, three stars, but if it improves with age and a little drying time, I may well upgrade it.

Given a little time to air, it's even closer to the hay and bread sweetness of the last incarnations of Dunhill Flake. I'm going to put a few tins away to mature, and have upgraded my review to four stars, as I honestly don't think I'd be able to distinguish between them in a blind tasting.

The Flake is dead, long live the Flake!