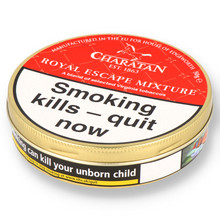 Highest quality bronzed Virginia leaves are carefully conditioned and are added to rich, heavy-bodied Virginias, noted for their aroma. A unique flavor is added to the final blend to enhance the subtle and piquant aroma.

My first thought - It's a cross between a whiny, perpetually offended millennial with less testosterone than a 90 year old and Treason May. Or in other words it's so restrained in both the flavor and strength of the original it totally lacks a backbone.

Flavor - The Virginia doesn't really come though, the plum casing is muted 90% of the time. Only appearing every so often and you have to work for it. And worst of all, the strength or almost complete lack there of.

A bowl of Royal Yacht before breakfast with the morning coffee, it wouldn't sucker punch you but at least you know it's there. This stuff is offensively mild in every bloody respect.

As a replacement to the beloved Royal Yacht it fails quite miserably.

As a standalone baccy without any references to Dunhill it's just mediocre.

Tried another bowl to see if it had improved a bit like the Eventide had. It's a definitive NOPE, still crap.

I'm not all that optimistic about the new Charatan subs for the discontinued Dunhill blends; I suspect that the same falling demand that killed off the Duhill blends will soon see off these too. Let's enjoy them while we can, though. This is a reasonable replacement for Royal Yacht, I think (though why did Charatan choose such a peculiar name for it?). Cool, slow burning, reliable and well behaved with a plummy topping that is noticeable without being too obtrusive. Quite strong, too, though certainly acceptable as an all day smoke. I don't think it's quite as strong and full-bodied as the original Royal Yacht.

Royal Yacht was a favourite of Georges Simenon, and I think he would have approved of this. It isn't a perfect copy, but it's close enough.

Regardless, a top notch straight Virginia in its own right.

Is it really Royal Yacht? No, but it's a very good Virginia blend in its own right.

I can't understand anyone dissing this mixture.

It's the second of Charatan's Dunhill replacements that I've tried, and as with Victorian mixture (replacing Dunhill Elizabethan) I have found it to be of very good quality, and preferable to the Dunhill version.

I always disliked Royal Yacht, and so bought Royal Escape by mistake, but this stuff is very nice indeed. Royal Yacht tasted like dry horse dung to me, but Royal Escape is full, nicely moist in my tin, steady burning, very mildly fruity, and very satisfying. No bite whatsoever. Nice room aroma.

Update: 11 months after posting review above, my appreciation of Royal Escape is even greater. Not many pipe baccys burn as well, have as good a flavour and are as satisfying to smoke, with no drawbacks at all in terms of bite or anything else. I find that with most baccys you've got to try at least two tins before you can get to understand what the baccy is all about and what the blender has tried to achieve. Much of that can only be appreciated at an almost subconscious level, because it is so difficult to describe flavours, and more importantly the often subtle meanings of them. Okay, coffee, chocolate, cherry and others, when applied as strong casings, are unmistakeable, but with light casings and no casings it's a different story. Royal Escape has, of course a light casing of plum flavour. But because it's light, there's so much more to be understood. And as you smoke, or in the aftermath, you often compare with the dozens or hundreds of other baccys you've smoked. Your mind and palate are riffling through so many, and giving at least an approximate ranking to your current experience. For me, Royal Escape is up there, if not in the top 5, certainly in the top 10 of the hundreds of baccys I've tried over the last 35 years. Would have been longer, but I didn't start pipe smoking till I was 40!

Another of the blends I've been reviewing for the UK tobacconist McGahey's.

Often marketed as a replacement to Dunhill Royal Yacht? Well, although I've smoked RY, it's been many years since, and because of the cessation in production I can't really compare. Albeit, like the other new Charatan blends based on the Dunhill's, I'm quite impressed.

In the tin sits a mixture of quite coarse ribbons. Not too coarse, but there are a few that are rather chunky. The colours are mostly dark and medium browns, with a few lighter ones. My moisture's decent.

The plums embellish the smoke, but don't cause the flavour to be an aromatic cacophony; the plums act a little synonymously to a hearty dose of Perique! I like the flavour from the tobaccos. They lack the commonly found grassy, citrusy, sharp Virginia qualities, and instead give rich, fruit; to my palate it seems to have included more darker, redder, Virginias, as opposed to lighter, brighter, ones. The topping compliments this flavour well, increasing the sumptuous, decadence. Because of the coarser cut of the ribbons it burns quite slowly, and also cool. I don't find much of a bite from it.

Nicotine: above medium. Room-note: quite pleasant.

I've tried most of the Charatans now and they are all flat, uncomplex and just generally rubbish. I am mainly a Dunhill or lakeland tobacco smoker, of over 15 yrs. The Charatan range are amongst the worst I ever had. Having a clear out and thrown them all away including 5 unopened tins from a bulk buy last year.

Oh dear. After the success of Charatans Flake, I had high hopes for this, but they have been cruelly dashed.

Royal Yacht was a strong Virginia ribbon, of a mid brown colour, supplied quite dry, with a subtle, almost undetectable topping. This is a mix of ribbon and ready rubbed, shades ranging from light to very dark brown, supplied soaking in humectant and casing. It has a strong plum casing which does not come across in the steamy, hot smoke. The bowl of my pipe got red hot, and I kept having to put it down. Trying to dry it out did not help, but revealed that a substantial proportion of the tins' contents were dust and crumbs. It seems to me like a Cavendish aromatic, a style I'm not fond of. It's not very strong at all, and has very little flavour.

This is one of few tobaccos that I couldn't bring myself to finish, and in view of the proportion of dust in the tin, I returned it to my tobacconist, who was kind enough to replace it with another.

It is telling that the more complimentary reviews here are from people who did not enjoy the Royal Yacht, or can't remember it very well. I think the Charatan tobaccos would be better for not inviting comparison with Dunhill, as it sets customers up for disappointment. This tobacco may appeal to the aromatic smoker, but I think the Virginia lover or the hardcore fans of Royal Yacht will be very disappointed indeed, as I was.

Similar Blends: Any Cavendish aromatic. Not remotely like Royal Yacht..