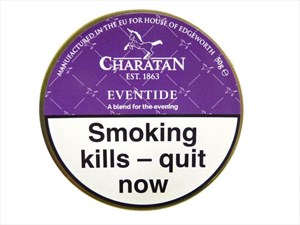 This was supplied by my pal Martin McGahey of McGahey's tobacconists (I write for them). And, I love it!

So, it's clamed to be similar to Dunhill's Nightcap? Well, that casts a big shadow!

In keeping with Nightcap it isn't a stertorous Lat Bomb. It's a weighty, heavy, smoke, with lots of flavour, but we're not talking about anything harsh, or uncontrolled. As well as the Latakia there's a notable taste from the Perique. This gives a zesty, fruitiness, on top of the heavier tasting Latakia. Heavier; it isn't overly sharp or cutting, like some of the varietals, but rich and full. The Virginia's the platform and base, but the flavour is outweighed by the other two; in comparison the Latakia and Perique are much more formidable. Although full tasting, it's also very smooth. The burn's standard is high: not fast, cool in temperature, creating a comfortable, bite-free, smoke.

Nicotine: above medium. Room-note: not great for others, but I quite like it!

It’s billed as being a version of Dunhill Nightcap. There are a number of differences, including the strength and taste thresholds (this is a little lighter and less sweeter), the lesser presence and depth of the Latakia, Turkish and Virginia in this mix, and the perique level is a little higher here. The smoky, woody, earthy, mildly sweet Cyprian Latakia is the lead component. It doesn’t overwhelm the other varietals. The spicy, raisiny, plumy perique is an important supporting player. Neither the tin description nor the other reviewers mention Turkish, but it is present, and offers some wood, earth, sour, spice and floral notes. It just rises above being a condiment. The grassy, citrusy Virginia is noticeable, but not very forceful at all, usually being a condiment in terms of effect. Sometimes, it’s further in the background. The strength level is medium. The taste starts out as medium and by the half way mark, crosses over that line by a rung. The nic-hit is a couple of steps past the center of mild to medium. Won’t bite or get harsh. Burns cool and clean at a moderate pace with consistent mildly sweet and spicy, and more sour, savory flavor from start to finish. Leaves little moisture in the bowl, and requires a touch more than an average number of relights. The pleasantly lingering after taste has less of a campfire feel than Nightcap did. This is not an all day smoke, but it is repeatable.

After trying Royal Escape I had hopes for this. I shouldn't of got my hopes up.

Even as a English Blend it's bog standard. Overshadowed by Squadron Leader, Skiff Mix, Ashton Artisan, Black Mallory. Weak in both strength and flavor, lacking in that nice heavy latakia. And very lacking in vitamin N, none of that relaxing feeling after a bowl like you got with nightcap.

At this point I'm done with even bothering with Charatan's offerings.

I hate to throw tobacco away so it's been sat in a draw for the last 4 months. Decided to have a little bowl just to see if it's improved. Surprisingly it has, slightly. There's a quite pleasant dark chocolate/ cocoa note to the smoke and it's feeling a little richer for it.

I still wouldn't go out of my way to buy it but maybe it will evolve into something enjoyable in another 4 - 6 months.

If you like English mixtures, this is a good one: complex, smooth, flavoursome - and it doesn't bite. The Latakia is notably present, but not overwhelmingly so, and the spicy Perique adds a very welcome dimension. Eventide is a civilized tobacco that lights readily and behaves consistently all the way down the bowl, leaving behind a fine white ash and no goo at all. It burns a little too quickly for my liking, but that's a function of the ribbon cut, and hardly a fatal objection. I find that a ten minute drying time between loading the bowl and lighting up is a good idea. I wouldn't recommend Eventide to the beginner, but experienced pipe smokers will appreciate its many nuances. This tobacco is full of flavour and different aspects of the flavour profile present themselves at different points during the smoke. Take if slow, then, and savour it. This is a tobacco for the armchair in front of the fire. If you smoke it while doing something else you'll miss a lot.

As Pipe WIzard has pointed out, Eventide isn't an exact match for EMP, but it's pretty close, and a good smoke in its own right. The falling demand that killed off the Dunhill blends will probably also kill off the new Charatan subs before too long; but let's enjoy it while we can. We pipe smokers are on a sinking ship anyway, so let's go down with the band playing.

After Dunhill discontinued their tobacco products, Charatan released a series of tobaccos designed to replace them. Eventide is their version of Nightcap, which has long been one of my favourite English blends. As soon as I heard about this, I couldn't wait to order some and try it out.

When it arrived, I immediately did a side-by-side comparison. I then smoked several bowls of Eventide in a few different pipes over the course of the next week. Here is my experience with it:

Upon opening my tin of Eventide, I was greeted with that old familiar smell... Nightcap! In terms of appearance and tin note, the 2 are virtually indistinguishable. As someone who was very fond of Nightcap, this put a smile on my face right away. I was fully expecting there to be little to no difference between the 2 blends. Unfortunately this is not the case when you light up. The first thing I noticed is that Eventide has a honey-like sweetness that isn't present in Nightcap. It is definitely not as strong in the nicotine department and also doesn't contain as much Latakia. There are some similarities but not enough to make Eventide a suitable replacement for Nightcap in my opinion. For a blend that allegedly contains the same variety of tobaccos, it borders on being one-dimentional. You get nowhere near the level of complexity and depth you would find in Nightcap.

Having said that, it's not a bad smoke. It packs well, burns well, doesn't get too hot and has a fairly pleasant taste. While I probably won't be picking up any more of it, I won't have any trouble finishing the tin I have.

Is it a match for Nightcap? No, but it is still worth trying.

Having never had the pleasure of smoking Night Cap, I can't comment on the similarities between the two blends but I'm even more disappointed I missed out on Dunhill's flagship after smoking Charatan Eventide.

It is near perfect moisture from the tin, burns to white ash and does not bite but it does burn rather fast and if pushed hard will heat up your pipe.

Three and a half stars from me.

“Charatan Eventide” is definitely inspired by „Dunhill/Peterson Nightcap”. These two mixtures are really close. Check my review on “Nightcap”.

After having smoked several bowls of “Eventide”, I decided to do a side-by-side comparison of “Nightcap” and “Eventide”, each in a pot (a Vauen and a Nording). This way some subtle differences appear, which I did barely notice when smoked on different days, since these two mixtures are very similar. Maybe “Eventide” is slightly mellower.

The difference is in the Orientals. I notice a variance in spices. In “Eventide” they stand out a bit more and provide a different variation of spicy tastes. But that’s a matter of personal preference, not quality. Both are great mixtures and I have put both on my list of favourites. If you like “Nightcap” I highly recommend you give “Eventide” a try.

Age When Smoked: New, out of tin.

I think what should be said first about this is that this is NOT Nightcap, but a new blend which the makers think a Nightcap fan might enjoy. The idea that this was somehow a substitute may have ruined this blend for me, as well as rubbing salt in the wound of Dunhill's demise. Nightcap is no more.

However, the blenders have offered this up for comparison to the mighty Nightcap, and that is what I will do.

So first impressions on opening the tin. The aroma is rich, slightly smokey, malty sweet. There is some of that yeasty fermented rotting leaf smell that was characteristic of many of the Dunhill English mixtures and strongest in Nightcap. Here though, it's only a hint compared to the heady stench a fresh tin of Nightcap would emit. There was also a sharpness to Nightcap that this lacks.

It is visibly a different tobacco, while the ribbon cut and mix of black and brown leaf is similar this blend contains pieces of ready rubbed flake, not found in Nightcap. By this point when I'd first opened the tin I was already disappointed. But I filled up and lit up.

It takes a light easily enough, and offers a milder flavour to start with. It's not overloaded with latakia, and the flavour develops as a malty sweet smokiness. There's a hint of toast, and some spice, and as the bowl progresses the flavour does build, although to my tastes it is at every point milder than Nightcap. It also lacks the unpredictable complexity of the latter, although it's by no means one dimensional.

Towards the end of the bowl, where Nightcap was building to a spicy rich crescendo, Eventide appears to have burnt off most of the smoke of the Latakia, and instead offers a surprising honey sweetness. I mean really very sweet! This isn't unpleasant, but sets it further and further apart from the blend it purportedly emulates.

This blend seems to burn a bit on the hotter side, but lacks the intensity and fiery spice that a bowl of Nightcap would conclude with. I don't think it supplies as much vitamin N as the Velvet Hammer, at any rate it lacks its sedative properties.

In conclusion, this is a fairly good strong English mixture which has unfortunately shot itself in the foot by inviting comparison with one of the best loved and richest of such tobaccos ever made. RIP Dunhill Nightcap, you were splendid.