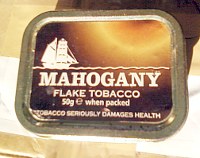 I have smoked this flake a number of times, and it has never ceased to impress me. Not that I would smoke it regularly, but in those beastly (icy damp and wind swept) English winters-- especially when you live as a student in a college flat, usually with no central heating-- it can come in very handy. It is a tobacco difficult to find, even in England. A dark flake, not at all easy to break, Mahogany can seem a bit unfriendly. However, once you manage to pack it, and light it, things change.

To start with, it is an extremely cool and rich smoke. There is no tongue bite in this one! The smoke flows evenly, producing a very peculiar taste. Some reviewers may describe it as ?soapy? (a seemingly common trait of many English tobaccos); others may find it slightly bitter, and others still would probably find it similar to dark, unsweetened chocolate. But it is tobacco alright. Secondly, once you light it, it burns exceedingly well, and lasts for a long, long time, its flavour lingering on long after you manage to finish a bowl. When I used to smoke it, DGT was a most common practice, and very rewarding too.

The flavour of Mahogany is rich but not complex. Rather, it is a very ?straight forward? tobacco (one-dimensional for some), but it fully enraptures your palate. If smoked whilst drinking Ceylon Breakfast Tea, you are in for an experience. Furthermore, if at the same time you also happen to be reading something by Hegel or Nietzsche, and/or listening to Bartok, well, you tend to forget the weather, in spite of frosted hands and nose.

Most definitely, it is not an elegant, high class tobacco. It has nothing to do with the more classy Dunhills?, Rattrays? or Davidoffs?. One might even think of it as something a working class hero would smoke (Tony Benn, perhaps?).

Oddly enough, the tobacco does not gurgle, and it does not leave any unpleasant after taste in the pipe. On the other hand, it has a pleasant and subtle room aroma, redolent of a nice chimney fire. Not that it is a crowd pleaser, but it is a tobacco one can publicly smoke (at pubs or just walking around town, something that, at least for me, was not advisable when smoking Balkan Sobranie?s Original Mixture or Rattray?s Black Mallory).

All in all, I would define Mahogany as a very original smoking experience. Stronger than St. Bruno Flake (which I don?t find particularly harsh or powerful), but not as harsh or overwhelming as Gawith?s 1792 flake (similar to both, though).

As for the possibility of it being done with a by product of the French polishing industry, I could not tell. Never tried some!

Was given a tin of this by a friend. He is no longer my friend.

In short, yuk. Taste reminiscent of walking through the perfume counters of a large department store whilst breathing through your mouth.

The reviewer who likened the flavouring in this stuff to something from the French polishing industry was doing a gross injustice to a very fine and noble industry. This stuff would be better likened to a by-product of poor quality cattle manure. It is one of the only tobaccos that I have come across that stains the wax paper that it is packed in a horrible greasy brown. The tin aroma is heavy and somewhat unpleasant and the flavour is no better- swamping the tobacco taste almost completely. I don,t know what this is flavoured with, but the contents of a septic tank come to mind. Underneath I suspect that the tobacco is of reasonable quality, but the vile casing should be banned for ever. In a word - abominable!!

well it's been a while since I tried this but I don't remember it being as bad as the reviews below make out. I thought it was alright really.

I couldn't possibly read Tantric's review of Mahogany and not try this flake. All in all, I'm glad I did, 'though I won't rush to get more any time soon.

A light-medium coloured flake, it rubs out quite nicely, burns well, and the tobacco taste is always present, although usually just slightly weaker than the taste from the topping. Ah, the topping. I proffered the open tin to any nose that looked the slightest bit friendly; the consensus was that it was something citrus-like, with perhaps a touch of anise. The taste wasn't far off the scent.

The smoking experience is like a toned-down Erinmore; with the advantage that the bowl doesn't turn bitter towards the end, and there was no bite...two problems which have plagued my efforts with Erinmore. I couldn't imagine someone liking one of these blends and not liking the other; they seem different by degrees, not type.

That being said, I would smoke this on an irregular basis, just for a change. It's not bad, but it certainly is not great.

October,2015: RIP Manchester Tobacco Co., an altered version of this "Mellow Mahogany" is now made by Gawith, Hoggarth&Co., reviews there...

Mahogany by name and most likely made with a by product of the french polishing industry. Made by the manchester tobacco companey in the Trafford Park industrial estate this heavily cased flake fails to deliver anything but a reminder of the less savoury parts of the Manchester Ship Canal.

A good alternative for those addicted to shoe polish !.