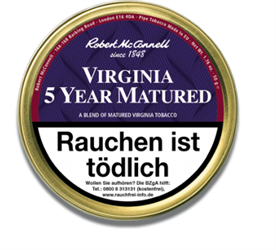 A blend of matured Virginia tobacco.

The very grassy/hay-like, mildly earthy, citrusy, lightly dark fruity Virginias take the lead. The dry, lightly floral, earthy, woody Orientals are in the background. These attributes are fairly close to the original Dunhill version, except the dry and floral notes are a tad less obvious. The other attributes of the Orientals are a step stronger. The lemon and apricot toppings in the original are extremely mild here, and mildly noticeable, unlike the original where they are a touch more potent. The toppings tone down the tobaccos a little. This version is a little less sweet. The strength and nic-hit are mild, and the taste level is a step past that. Won’t bite or get harsh. Burns cool and clean at a moderate pace with a very consistent, mildly sweet and lightly savory flavor. Leaves little moisture in the bowl and requires an average number of relights. Has a short lived, pleasant after taste. An all day smoke. I gave the Murray’s version two stars, and two and a half for the re-release. This gets three stars because it’s better, even though it’s not that close a match, it's in the ball park despite being just a little stronger. While I doubt the tobaccos were aged five years, they do have the feel of aged varietals to a small extent.

The blend is a medium narrow ribbon of medium length. It is a mix of tans and browns. The pouch note is musty hay and a slightly sweet fruit. I am claiming the top note is apricot. The moisture level of the sample was good for me, and I smoked it as delivered. I am reviewing it on its own merits and have no meaningful comparison to make with Dunhill 3-Year Matured.

Smoked this is grassy and the apricot topping is more present than in the pouch note. It is only mildly aromatic, but the flavor is good and it compliments the Virginia nicely. The strength is a medium-mild, and there is a slightly "dry" quality to the smoke that I attribute to the Orientals. I did not get any herbal or floral, although the snork gave a pleasant honeysuckle, and that may have been the subtle influence of the Orientals on the apricot topping. Puffing brought out some tart in the Virginias.

This was an easy smoke and very pleasant, but it did not have much of a "wow" factor for me. I think it falls in the category of an "all day" smoke. It is easy to keep lit and not quirky.

Having smoked and enjoyed all of the Charatan Dunhill remakes I ordered some of the 'McConnell attempts! First up is this, and it's a good smoke!

The tin holds medium size ribbons, which are prominently just below medium brown, there's a couple of lighter pieces, and the moisture makes it imminently smokable. The tin-note's slightly citrus like, but nowhere near being 'aromatic'.

Upon first light, of the tobaccos, the predominant flavour comes from the Virginias; fresh and fruity. After the initial five minutes the Orientals become more salient, giving the smoke more of an ambrosial, flavoursome, calibre. The fruity topping has a little more of a peach, apricot character than it does citrus; the citrus 'twang' is next in line. It burns at an average pace, wanting very little maintenance. I don't get tongue bite; even if I puff with ridiculous force!

I smoked the original Dunhill 3 year back in the 60;s and 70;s . It was a stringy and deep Va. mixture with a mellow taste . Quite good . The Orlik reissue was a perfumed failure with Virginias that were more 3 month matured . ( read my review ) Now we are gifted a K & K reissue under the Mc Connell label . Well , K & K is the master of reissues and this is a prime example . The smoker finds a stringy and rather dark tobacco with mild tin note of maybe apricots . The moisture level is a little wet and it would be wise to let it sit a while . The taste is really smooth , sort of like the HU tobaccos . I did find an oriental presence but it was a minor player that served to rev up the Virginias and provide some complexity to the mixture . The stringy cut provides an even burn that can be a little rapid if one puffs to strongly . While this is still not a copy of the old 3 year Dunhill it is in the spirit of the original blend . Better yet , it stands on it's own as a very nice alternative virginia smoke .

My tin is different to the one on here ; mine is yellow and says 5 Year Matured Virginia on the lid. Therefore I am assuming they as the same thing. Mine must be new I suppose.

The opening aroma is subtle. A light whiff of virginia leaf that has been lovingly prepared and comes through with a even lighter sweetness. Gorgeous.

Taste-wise, this is like so many virginias I have tried over the years and is certainly on a par with fine tobacco blends like Broken Flake from Vauen or maybe Dan Tobacco's excellent virginia slices.

It isn't the most exciting blend you'll ever come across this is true, but there is enough complexity of flavours here that send it into the top end bracket of similar blends. The initial light taste is again like the opening tin aroma very subtle, and I get satisfying waves of earthly, woody, slightly sweet tobacco, with a sliver of caramel and coffee.

It's quite a strong brew and for smokers starting off with pipes, be careful to smoke it slowly and gently otherwise it will bite you severely.

The price at 13.20 euros is competitive also. As usual the absurdity is I've not seen it in British Tobacconists.