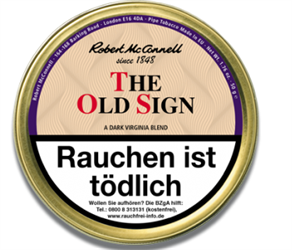 I like this even better than one of my favorites from Dunhill! The Dunhill version always had a slight bitterness to it that is replaced by a bit more of the nice sweetness in this one. They have certainly captured the character of the original, and to my taste, made it better.

The Virginias provide a fair amount of grass, hay, and citrus, a little earth, wood, bread and darker fruit as well as a floral note. Not sure what the very mild topping is, but it doesn’t tone down the tobaccos. It’s present to help create a sliver of fermentation and “Royal Yacht”-like plum essence which is more evident in previous Dunhill Ye Olde Signe versions. It succeeds on a minor scale as it’s muted in its effect, though it does gather a touch more potency by the half way mark. Overall, the entire composition is weaker in every way than what they have tried to copy. The strength is in the center of mild to medium, and the taste is a step and a half past that. The nic-hit is almost as potent as the strength level. No chance of bite or harshness, and has no rough edges. Burns cool and clean at a moderate pace with a very consistent flavor that translates to the lightly lingering after taste. Leaves little dampness in the bowl, and requires an average number of relights. An all day smoke. I give it three stars for its own merits, and less for being a successful clone. I gave three stars to the Orlik version.

Ye Old Signe , an iconic blend not seen since 1983 . I do not count that foolishness that Orlick put out recently . This blend is in the spirit of the original but not close . The Virginias that YOS had are simply not available today . I must , however say that K & k has come up with a pretty good blend here . Upon opening it reminded me of Wessex Classic Virginia Flake . Really nice sort of stringy cut , good moisture level and an inviting tin note of fresh hay . A pretty straight forward blend of very decent virginia with no real noticeable topping . Excellent burn . I felt , however , that it does peter out a little in the bottom third of the bowl which prevented me from giving it 4 stars. A nice smoke any time of day , lite and puff.

We must remember tobacco taste and interpretations are 100% subjective. One person's trash can be another's treasure! With that in mind I'll begin with saying I'm not a fan of this!

The blend includes quite an equal amount of medium and darker browns, my moisture's a little high (fine by me!), the ribbons are pretty uniform in size (medium) and there's not much of an aroma being given off.

'Stale'. The added flavouring and dull Virginias coalesce to form a flavour reminiscent of stale tea. The flavouring isn't enough of an appurtenance as to completely distract from the tobaccos, but being as these are flat in taste the two work well together! Joking apart, I could see it suiting many as a Go To smoke, it just doesn't suit me! The burn's decent, giving a cool smoke and is very reliable; it requires hardly any maintenance. I don't find it troublesome with tongue bite, even if forced.

Nicotine: a little above mild. Room-note: not that bad; IMO.

Shakespeare? Obviously I'm not a fan. I HATE to be a misery but I'll only give this one star; shame, as McConnell do some FABULOUS blends. But, this isn't one: