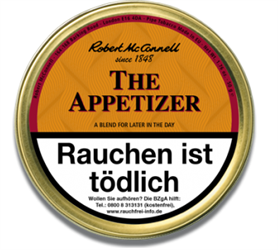 A blend for later in the day.

Notes: Dunhill Apéritif clone, and was originally called The Appetizer.

Contrarily to the other review, the content of my tin was quite on the wet side. I have smoked Aperitif quite a few times around 15-20 years ago, and this replica seems to be slightly different: a bit less Latakia, more sweetness, a slightly fuller body. Aperitif tasted slightly drier, cleaner and more smoky, in my memory.

That said, it's an OK blend. I would almost be tempted to give it three stars (recommended) if judged alone, on its own merits. I decided to give it a stricter rating for two reasons: the first is that I don't rave about the presence of Cavendish in an EM, it adds not only sweetness but somehow a "dirty" and mouth-drying note that I find cloying. The other reason is that in the same Heritage line, Notting Hill fits much better the bill of a "medium" latakia mixture: it's just as sweet from the rich Virginias, but I find it more agile, more fragrant and balanced. If you have tasted Notting Hill, this is more or less the same with a touch less Latakia, and the added Cavendish (which is a minus in my book).

Anyway, this is a good English Mixture with a not excessive amount of Latakia, and overall quite "chewy" and rich in spite of not being a heavy one. Quite simply, it doesn't find a place in my rotation because there are alternatives which are more suited to my taste.

Tin note - Latakia and not much else. Not a powerful aroma, a little dull if anything

Condition - On the dry side of 'ready to smoke'. The tin came to me from a friend in Germany, and had a paper seal across the tin and lid. I could not see a production code.

It lit easily, probably because of the slight dryness, so I smoked it slowly. There was only one relight and it smoked down to ash.

Impressions - This is McConnell's Aperitif match, so it is not Latakia heavy. It settled down as the bowl progressed, with the Oriental tobaccos, which of course includes the Latakia, predominating. There was sweetness from the Virginias, and enough of a tingle on the retrohale to make you think there might be a touch of Perique in there (there isn't). There was also a slightly cigarette like taste at times, and at others a not unpleasant sour note.

In summary a Scottish mixture that while not a bad tobacco doesn't have the subtlety of taste of others like Red Rapparee, Tree Mixture, Old Dublin, MM 965 and Black Mallory. It joins Charatan Four Leaf on the short list of Scottish mixtures I won't be buying again.

I will update this review when it has had some time in a Mason jar, and perhaps a a little rehydration.

When Dunhill blends disappeared from the market, many manufacturers began experimenting to clone them, or at least achieve a similarity. Robert McConnell's Heritage series went further than the others - not only were their blends similar to Dunhill in flavor (some more, some less), but they also had similar names. For example, this blend, to emphasize its similarity to Dunhill Aperitif, was originally called The Appetizer. But as with other Heritage tobaccos, it had to be renamed so as not to incur the righteous wrath of the owners of the original brand. So the tobacco was called St. James Park.

The 50 gram tin had, as usual, no code indicating the date of production. However, it had a Q4 2017 excise stamp on it, and the smoking warning pictures were of the latest standard. When I opened the tin, I saw that the paper was slightly soaked with tar. Given that, and the slightly lower price of this tobacco than the rest of the Robert McConnell tobaccos in the store, I'm inclined to believe that the batch with it arrived in Russia in late 2019 or early 2020. At any case, that's when I made my first big purchase of this brand of tobacco. Which means the tobacco was produced around the summer of 2019.

The main notes of the flavor - tanned leather and wood, in the background - a slight smokiness of the latakia, a little complex smell of spices (coriander, paprika, a little black cardamom), a bit of dry hay, figs and the scent of dark plum. Very smooth flavor without any outstanding notes, to some it may seem boring. Despite the presence of the words Saint James in the name, there is no perique in the blend. Therefore, it does not have the spiciness and saltiness that is characteristic of this tobacco. The spice comes from oriental tobaccos.

The tobacco has a very light smokiness to it, overlaid with oriental notes. The tobacco deceptively offers a subtle spiciness that can be mistaken for perique. In fact, there is no perique in the blend, and this flavor gives away a fair amount of Oriental. Virginia gives a hay and woody flavor, without the usual sweetness. Cavendish, on the other hand, adds a slightly sweet plum flavor that stays in the background. Overall, the taste of the tobacco is absolutely not outstanding. I'd say there's nothing extraneous to it - it's just tobacco. And I must say, the tobacco is fairly strong - the large size pipe surprised me with a light but noticeable nicotine hit. The tobacco smokes quite dry and cool, burning into a dark gray ash and leaving almost no moisture. A woody, slightly sweet aftertaste.

The smoke of the blend is quite dense, with the scent of smoldering wood and a sweetish tinge. It is able to stay in the room for several hours.

What can I say in the end? First of all, I'm surprised by the name of the original Dunhill blend. "Aperitif" is supposed to stimulate your appetite, have some bright notes that turn on your sense of taste. This tobacco, on the contrary, is completely devoid of brightness, it is remarkably neutral throughout. If the original blend it was based on had the same bouquet, perhaps it should be called "Digestif" - created as if to complement the end of a good lunch or dinner, when you take a glass of your favorite cognac or whiskey and sit back in a chair leisurely enjoying the taste of a drink, shading it with a light tobacco flavor. However, this very high quality blend copes with such a role perfectly.