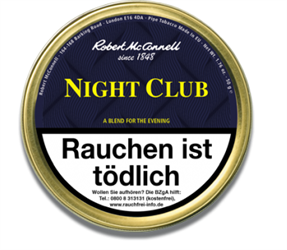 A blend for the evening.

The smoky, woody, earthy, mildly sweet Cyprian latakia is the lead component. The dry, smoke, woody, lightly floral and sour Orientals are secondary players. The grassy, lightly citrusy, earthy and dark fruity Virginias are the third stars in the mix. The spicy, raisiny, plumy perique is a condiment. The latakia and Orientals are not as forceful as they are in Nightcap, while the Virginias and perique play a similar, but not exact role in regard to being a close match. The strength is medium, while the taste is a step or so past that mark. The nic-hit is a little closer to medium than it is to mild. Won’t bite or get harsh, but like Nightcap, does have a rough edge here and there, though it’s a tad more obvious in Nightcap. Burns cool and clean at a reasonable rate with a very consistent mildly sweet and fairly savory flavor from top to bottom. Leaves little moisture in the bowl and requires an average number of relights. The after taste lingers a little, and the room note is a little stronger than that. Can be an all day smoke for the veteran. It’s fairly similar to Nightcap, but lacks a little of the strength inherent in the Dunhill product, which isn’t an all day smoke. I gave four stars to Nightcap.

It has been too long since I have smoked Dunhill Nightcap to make a meaningful comparison. This is reviewed on its own merits.

The pouch note is earthy and smoky with just a hint of barnyard. The blend is primarily thin ribbon of medium length with a few small bits of mostly rubbed out flake. It is lots of dark leaf in different shades with perhaps a third of it tan ribbon. It came at a good moisture level for me, and I smoked it as delivered.

The first thing you notice is the smoky latakia. The perique presents as a hint of plum with some pepper only when puffed at the first of the bowl The Orientals are condimental, and as close as I can tell are responsible for the woody quality of the latakia campfire. They do not add a significant signature. Flavor is full and a little "chewy." Perhaps "rich" is a good description of the taste? The Virginias give a slightly sweet, grassy foundation.

The perique seems to grow in stength as the bowl progresses, but otherwise the flavor was consistent. I was not able to discern a topping.

The blend burned without drama. It did not require an unusual number of relights, and it did not leave any dampness in the heel.

This is easy to recommend if you don't mind some flavor and moderate nicotine. I an believe it might be a good blend to try for a cigar smoker who complains that pipe tobacco tastes like hot air.

Once again a standalone review.

Just after opening the tin I noticed a high moisture level as in every tobacco from the heritage series that I have tried yet. Cold smell is indeed spicy but also warm and sweet almost like marmalade. Variant cut with flake shares looks nice also. I dried it for a few hours for the first try but I suggest over night drying after having a cooler smoke that was a bit more tastefully.

First taste that hit my tongue was a spicy mix of Lata and wooden earthy Perique and a fruity note of plum above that. Although Perique is pretty dominant I think. I can taste a bit of Virginia even if it's not mentioned in the tin description but it's just a hint. Rich flavors earthy and peppery but still mild and creamy; Latakia is a bit too decent for my taste.

Characterful and rather dark tobacco that suits with a glass of wine maybe. Not a morning smoke at all, but for some "special" morning that requests a rough treatment

Edit: after half a tin of this tobacco I must say it kind of grew to me and I'll now give it a 3/4. Still a slightly edgy smoke but never boring. Would be a 4/4 if moisture level was ok.

Edit: Have emptied three tins by now. Second and third haven't been that wet. Still a high moisture level though.

The appearance is pretty much the same as Nightcap, dark brown and black, fairly even size ribbons. It doesn't smell too sharp, like a lot of English blends, but as I remember with Nightcap this has a fuller aroma; a good precedent for the forthcoming smoke.

As I thought from the tin-note the Latakia isn't too sharp, smoky or cutting. Instead it's rather cumbersome and heavy; a lot more lethargic than some! The Orientals are a definite addition, they give roughly as much character, but are also a little 'solid' and robust in taste unlike the 'floral, incense, odiferous' nuances that come from most varieties! The Perique and Virginias are miles behind. I notice a slight plumminess and soft fruitiness, but no strong spice or fresh hay. It burns well, giving a fairly cool smoke, but the only drawback comes from a touch of bite; when forced.

Covent Garden? A decent blend, only losing out on a full house due to the bite. But, it easily deserves three stars:

After finding that Piccadilly Circus and Marylebone are resonable recreations of Dunhill's London Mixture and 965 of old times (and finding PC truly excellent to my taste), I was curious to try this "clone" of Nightcap.

In my life I have smoked some aged tins of the original Dunhill Nightcap from the '80s (excellent), some fresh ones from the '90s (early Murray production, very good too), some fresh and aged ones from the early '00s (quite good), and some more recent ones (late Murray, and then Orlik/STG: all of them harsh, cardboardy, unbalanced), so I know how Nightcap should taste.

That said, Covent Garden is a very unfaithful recreation. As much as the two I mentioned above were reasonable clones of the corresponding Dunhills, this one is NOT. The overwhelming intensity of taste of the original Nightcap is lost here: you could not smoke Nightcap as an all-day, it would simply erase your tastebuds. You could smoke Covent Garden twice or three times a day, though. The same goes for nicotine strength: very often I have had a serious buzz with Nightcap, and a couple of times it even made me sick if approached without caution. Covent Garden is much lighter in the nicotine department.

That said, it's a very good blend if taken as a standalone and not as a Dunhill clone. What it truly successfully recreates of the Dunhill style is the wonderful "rotten" tin aroma, that sweetish, fermented note that has sadly been missing from the Orlik/STG made "Dunhills" (now Peterson). It's a sign that K&K used good tobacco with reasonable aging. Think of GLPease Blackpoint, and you might have an idea of how Covent Garden smells (and smokes, although the Pease is superior).

Yes, it's a very good blend: rich, with lots of evolution in the bowl, with a wonderful interplay of rich red Virginia sweetness, a creamy mouthfeel, the spice of the Orientals, the smokiness of the Latakia (not overwhelming: it's very well integrated), and from half of the bowl the pepper of the Perique (in moderation). All this, while retaining a "dark" quality, an autumnal quality, a richness that somehow is Nightcap-like. But... this is absolutely velvety compared to the brutal (and sometimes harsh) intensity and incense-soaked spice of the original Nightcap.

My only minor complaint is that it tends to lose fullness and taste towards the end of the bowl, as if some flavours fell apart, and that it shines better in tall and rather narrow bowl shapes (go figure) while it can be flatter in other shapes.

A failure as a Dunhill clone, a success in all other departments: a tobacco with a unique personality that finds a welcome spot in my rotation as "a different EM".

I finally opened a tin of Covent Garden. As you may be aware this was intended to be a Nitecap match when Dunhill stopped producing it under their name and before it was reintroduced under the Peterson moniker.

First impression is the tin note is very smoky. The moisture content of the tobacco is on the dryer side compared to most. It packed nicely and lit easily.

A strong smoky latakia flavor with some sweetness appeared on the tip of my tongue and front of my palette and a little pepper on the sides of my tongue. The Orientals develop as the bowl warms with a woody, dry floral spice and a bit of tartness. The Virginias follow with the spiced stewed fruit flavors of plums, raisins, and currants.

Comparing the flavors to Nitecap it is a little lighter in all aspects. I feel it stands on its own as a blend and can be enjoyed most of the day. Overall it is medium strength and nicotine.

This Nightcap "homage blend" is rich in Latakia and Orientals with some Virginias and a dash of Perique.

Covent Garden delivers a luxurious and rich smoke yet it's not really over the top. (I find it similar to Artisans Blend in that it's almost a Lat bomb but the various varietals add enough complexity to keep it interesting.)

The Perique adds body and presence to the smoke but it's condimental and with no noticeable nic hit. There's a strong and lingering Latakia aftertaste.

This is an excellent, medium to medium-full English blend that flies under the radar of more trendy and over-hyped blends.

COVENT GARDEN: This blend should be Nightcap clone, so my personal review is double: as a clone and for what it is, for its own merits. AS A CLONE: Similar, but it is not properly the same blend. The main difference is the Perique. I mean that Nightcap is more on the side of Latakia while in Covent Garden Perique is more evident, deeper and more peppery. Excellent Perique and great balance in flavors. C.G. remains a Latakia – based blend, a Latakia mixture, but Perique plays a bigger role than Nightcap.

FOR WHAT IT IS: Very very good, a deliciousness, a delicacy for Latakia lovers and for Perique lovers. Not an all-day smoke: it’s too intense and pregnant in taste. Ideal in the evening, after dinner and in any case after a large meal. Great blend! If you can’t stand Latakia, stay away. In my personal rating system (from 1 to 10) my score is 9 and three stars.