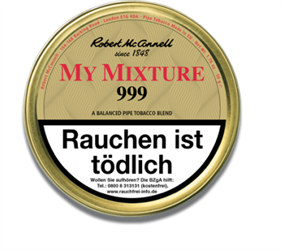 The smoky, woody, musty, earthy sweet Cyprian latakia is the lead component. The lightly floral and sour, woody, dry, spicy, smoky, earthy Orientals play a support role. The Virginias offer some citrus and grass with a little dark fruit and earth in a secondary position. The sugary black cavendish provides some sweet smoothness. The Dunhill version is slightly more complex with a touch less latakia, and the Orientals are a little more prominent here. This also a tad sweeter. The strength and taste levels are medium. The nic-hit is just past the center of mild to medium. Won’t bite or get harsh, and has very few rough notes. Burns cool and clean at a moderate pace with a mildly sweet and more savory flavor from start to finish. Leaves little dampness in the bowl, and requires an average number of relights. The pleasant after taste lingers a mite as does the more pungent room note. Can be an all day smoke. I gave the original three stars as I do this one.

The tobacco itself is a mix of medium and narrow ribbons of mostly medium length. It is a fairly dark mix with some tan leaf but mostly dark brown and black. It came at a good moisure level for smoking.

I have smoked Dunhill My Mixture 965 in recent memory and found it very similar. My Mixture 999 has a slightly more pronounced sour Oriental signature, and I found it slightly less strong.

Smoked, this is very good. It is not latakia heavy, and is a good combination of slightly spicy and a little smoky. The Virginia adds some sweet and some hay. It has some more body than many Oriental/Va blends, and the brown cavendish provides some fullness and enhances the sweet. The Orientals present as a pleasant sour that is always in the background. It was easy to sip and did not require an unusual number of relights.

This is very good, and I can understand there are people who would miss the original and want to find a good substitute. It seems Robert McConnell has quit selling this and the blend descriptions are no longer on the web site, so this may not be the substitute people are looking for.

Recommended - if you can find it.

A surprisingly faithful recreation of the Murray era 965 (while the subsequent Orlik/STG version has always tasted cardboardish and lacking in finesse to me).

It's a medium bodied but rich tasting EM with Cavendish (does this make it a Scottish?), and not exactly light in nicotine although for an experienced smoker it can be used as an all-day smoke. Good Virginias, fragrant Orientals, a healthy dose of Latakia (though probably less than in London Mixture), a rich slow burn and a perfect stringy cut with some larger bits. The disturbing element for me is the Cavendish, providing some sort of "cloying" overnote, a somewhat vulgar embellishment that takes away from the cleanliness of the other elements. Again, I stress that it's just personal taste: the vaguely nutty and balsamic hints of the original 965 are here too, and it's a really well made blend. But you have to like that Cavendish, which for me robs the blend of the ease of smoke and clean-palate characteristic that are so present in the old London Mixture and in Piccadilly Circus (which are just as full flavoured). I could smoke London Mixture/Piccadilly Circus forever, but not 965/Marylebone: after a while it would get tiresome.

Anyway, kudos for the fine recreation of an historical blend.

965 is my favourite tobacco, as of this writing I have just under 400lbs (yes you read that right) stashed. I have many old tins as well as the most recent (orlik) both tin and bulk. 965 is still available under the peterson brand as old dublin, which my tobacconist often jokes about, as he claims that pipe smokers lose their sense of taste, smell and sight, many claiming they are different blends.

So that being said, I cracked open a pre-murrary tin, a murray era tin, some sutliff match 20, and lastly some orlik bulk to compare this Mcconnel blend to.

First off, in the tin, I smell much less latakia, and more oriental. The cavendish is much sweeter, and the leaf appears to be a little wetter (which is great) for aging. I almost detect the faintest hint of casing.

On first light I get a rather leathery blast which leads into a rather sweet cavendish taste with the latakia in the background. As the smoke progresses it has a balanced delivery of oriental, cavendish, and virginia.

I must add that the virginia is much brighter and sharper than in the orlik and pre-murray era.

There is a light casing on the cavendish now detectable and this is shockingly similar to the murray era 965. Was it based on it? But due to the cavendish used this leans somewhat towards the match 20.

As the bowl progresses it reminds me of another lost blend, frog morton, in a way.

Overall this is a exceptional recreation of 965, but has a lost a little of the latakia strength. Not that it will deter me from buying plently of it!

Nicotine is stronger than the orlik incarnation but not by much.

I will still rate this as 4 stars as this is an adequate recreation of 965 with some changes, for better or for worse depending on your palate. Where it lost smokiness, which is only slight, it has gained sweetness and strength. The oriental is much more pronounced as is the leather. If you wondered what Murray era 965 tastes like, this is surprisingly similar.

This is a welcome addition to the English/Scottish genre and anyone who thought the older 965 versions were not sweet enough will find the perfect blend in the latest production.

If it is too sweet, add a small pinch of a strong dry latakia to a bowlful and mix it in well.

Carefully examining the tin I was holding, I could not find any indication of the production date on it. So I was guided only by the excise stamp of the 1st quarter of 2021 and the knowledge that this batch of tobacco was imported at the end of that year. So I wouldn't make much of a mistake if I said that the tobacco was produced last summer.

Appearance: a thin, even ribbon of a mixture of tobaccos, ranging from dark straw to bitter-chocolate. The quality of the tobacco is amazing - no compromises, a fine cut with no cuttings or veins.

Taste: extremely smooth, complex, with no distinctive notes. Nevertheless, initially, the latakia, with its woody note, a light hint of smokiness and a touch of earthy dusty taste, slightly prevails. To it adds Oriental spiciness, but not individual, bright and distinguishable spicy sweet pepper, cardamom and coriander, but a very soft whole spicy bouquet, in which it is difficult to make out separate components, and which is very well overlaid with the light sweetness of boiled fruit and dark plums with a subtle wine flavor present in Virginia, creating a great taste of this Scottish - given the presence of a small amount of cavendish - blend. As you smoke, the latakia recedes slightly into the background, the flavor becomes even more solid and dense, but extremely mild. The tobacco smokes exceptionally smooth and cool, does not bite, forgives the novice pipe-maker long and deep puffs without overheating the pipe. The strength of the tobacco is medium, in a very large pipe a nicotine kick is possible. The tobacco leaves almost no moisture and burns completely into a smooth fine gray ash, of which there is not much left. The aftertaste is woody, with barely a speck of dust on the tongue.

The smoke, barely perceptible in the room, has the smell of smoldering wood. It wears off easily enough.

What is the bottom line? First of all, it's a very tasty blend that has a small amount of latakia, flavored with a rich bouquet of orientals and cavendish that can be smoked all day long. The Germans have done a good job of recreating the Dunhill spirit. But how much does it replicate the original? This is where the interesting part comes in. For those who have smoked Dunhill blends for a long time, it's no secret that their production has been transferred from one manufacturer to another several times, and the taste has changed slightly each time. I haven't had the opportunity to compare Marylebone to Murray's My Mixture 965, and even if I had, the tobacco from before 2004 and earlier has certainly changed in taste over the years. However, I have the opportunity to compare the hero of the review with a 2014 blend made by Orlik, and I took it. The difference exists. The Cavendish and Virginia in the Marylebone are a little brighter, but the Latakia is a little more prominent in the original. Marylebone also tasted a little sweeter, which is logical. To wrap up the comparison, I will say a crappy thing: I liked the copy better than the original. I guess that's I just like sweets 😉

Smell of tobacco - honey and blooming meadow. Taste - fried sunflower seeds and rye bread, and some peat. Smoke or wood taste of latakia is tolerable, it`s an apperitive, not main dishes. Tobacco burns hot - watch the pipe. If you are looking for mix to slide from scottish to latakia or vise versa - it`s your choice.

One of the McConell tobaccos that I enjoyed the least. The Black cavendish does not finish amalgamating with the other tobaccos. The result is a Scottish blend far inferior to Dunhill's original, and others known as Westmorland or Black Mallory.