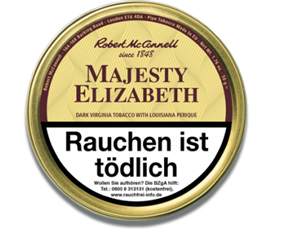 The tart and tangy citrusy, grassy, lightly hay-like, woody and earthy Virginias also have a modicum of tangy dark fruit as the lead component. The very spicy, lightly raisiny, mildly plumy perique is a supporting player. There’s more perique, and a lot less grass in this than in the current version of Dunhill Elizabethan. The dark fruit note is not present in DE either. This has a fuller flavor, also. The strength and nic-hit are in the center of mild to medium. The taste is step or so past those marks. It won’t bite or get harsh, but the spice does give a slight tongue tingle. Burns fairly cool and very clean at a moderate pace with a very consistent taste from start to finish. Leaves little dampness in the bowl, and requires few relights. Has a lightly lingering, pleasant sweet and spicy after taste, and room note. An all day smoke that is superior in every way compared to Dunhill’s latest version, to which I gave two stars.

I am reviewing this with no meaningful comparison to Elizabethan Mixture. I was sent a sample by a friend in Germany, and I have enjoyed it.

The cut is a narrow medium-length ribbon, and it is a mix of black, dark brown and light brown tobaccos. Pouch note is hay and a little earth. Moisture level was good for smoking as delivered.

The initial light is slightly sweeter than might be expected, and here may be a mild topping to give the Virginias a boost. The flavor is very good. There is a little citrus and some hay with a bread note every now and then. The perique presents as plum with some pepper when puffed. There is a peppery tickle when snorked. It burned well, and did not require an unusual number of relights. strength may have picked up slightly in the last half of the bowl to put it on the medium end of the medium-mild range. There was a certain smooth quality to this blend with no harsh edge. Taste was very consistent.

Overall this was a very pleasant smoke, and it is easy to recommend.

I'm a sucker for a decent VaPer in the mornings and having finished off my tin of Charatan Victorian Mixture (another Elizabethan match) I opened this up. A good choice!

The appearance is very congruous with Dunhill's original, and the moisture of mine was perfect. The smell from it's one of a Perique heavy VaPer, being really acute.

The smoke? An avatar of this genre for most who crave Perique; IMO! I get the most nuances of Virginia at the start; more of a fruity flavour than grassy or sharp. But after about a quarter the Perique becomes even more spirited and is an UNMISTAKABLE addition; very, very, spicy; like the tin-note implied! It burns perfectly, generating a mid-temperature smoke.

Nicotine: maybe above medium. Room-note: not the best!

Regent Street? A firm our stars:

Like most Dunhill clones this is a bit far away from the original but made " in the spirit of". The cut is a bit stringy and the tobacco is a little moist causing some of it to get stuck on the cardboard top piece . The tin note is inviting , mild hay and some prunes . This blend looks and tastes a lot like Astley #2 , also made by K & K. Judging it on it's own merits I found it quite pleasing . A mild hit of perique brings out the taste of this virginia forward blend. The cut provides an excellent burn , very easy to smoke the bowl right down to the bottom . Though not complex , Regent Street delivers a slightly sweet taste with hints of figs and prunes . Excellent to smoke out doors on a windy day because of the excellent cut . A real nice smoke when a lite perique is called for .

I was looking for a match for the Elizabethan mixture by Dunhill. And I have heard about Regent Street. It is not same blend, obviously. But is it a good VaPer to fill a gap after Elizabethan? I think yes. At least for me. It is not so full in body and taste, it is more gentle and less sweet. I think there is more perique in Regent street, you can taste those mild plumy and figgy taste by perique, Virginias are bready. But not too much dark like in Elizabethan. Overall, it is a gentle cool smoke with a pleasant taste. Don't haste on this leaf, it has that tendency to be harsh sometimes. Give it some drying time and pack lightly.

This is a Virginia / Perique Blend. It should be without any flavoring, but to me it seems like the Blender plundered the bathroom cabinet of his late grandmother and used up all the left big 4711 cologne bottles as a topping for this blend.

I only taste a disgusting perfumy/cologny, floralish aroma which made me sick (literally). I tried everything, airing out, filling it into a mason jar, even baking it in the end. It was no use, I couldn't smoke this tobacco.

I was quite fond of Dunhilll Elizabethan Mixture, but this one was unsmokable for me, and I can't see any similarity to the Dunhill blend.