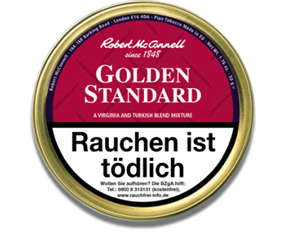 A Virginia and Turkish blend mixture.

Kohlhase, Kopp & Co. are marketing this blend as a replacement for Dunhill Standard. I went for a direct comparison, smoking a tin of each side by side. First off, the tin note is different, less spicy than the Dunhill. The leaf does not contain any red VA, which DSM has a goodly amount of, and in RMC GS, we have a lot of ready rubbed. I also found some leaf ribs.

Lighting is OK—the ready-rubbed makes it a two-match affair for me. The flavour is less toasty, more sweet, and has none of the nuttiness of the original. I have some annoying dottle left over at the end.

And now for the actual review: This is not DSM, but a new blend by KK&Co. So, everything is as described above. Judged on its own merits, this is not a bad blend, but nothing out of the ordinary either. A run-of-the-mill English which I would not refuse, but won't go out of my way to buy again either. I'd give 2-and-a-half stars if it were possible—just barely not quite good enough to fully recommend.

That said, I have tasted them both, and yes: Notting Hill is definitely richer, fuller and more laced with Latakia than Oxford Street.

I think it's a decent clone of the original Dunhill: lots of Virginia sweetness, it's almost creamy and buttery in its sweetness (while Oxford Street is oriented towards a grassy style). I am tempted to say that the sugar content has been artificially increased by traditional casing methods, not only by toasting and steaming, because it's so evident. And of course there is a nice medium smokiness from the Latakia, and good quality Latakia at that: not a Latakia bomb, just the right amount. But really... I think that this is one of the sweetest, most sugary tasting EMs I have ever tried (and I have tried most of the ones made in the last 30 years), which is a bit puzzling and might not be to someone's taste. It definitely is unique, and I don't remember Standard Mixture to be this sugary (although of course it WAS on a sweet side due to the high Virginia content).

Some may say that compared to others, it's a slightly unremarkable blend. And that's exactly the point: the original Dunhill was meant as a "standard medium", as exactly how a middle of the road English blend for all day consumption should be. Rich and flavorful, but balanced and not too heavy. And it has that elusive smell, that very weird English note, that particular funkiness, that is not common in all Latakia mixtures... On the contrary, it was present only in those old Dunhills and in some of these modern McConnell clones.

Personally I prefer the smokier, drier, more leathery and more complex Piccadilly Circus (which is, in my opinion, nothing short of a miracle in these times) or the fuller Covent Garden, but this is a very good blend too, a staple that deserves returning periodically in one's rotation.