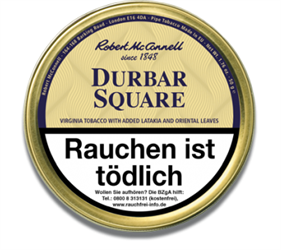 The dry, mildly floral, woody, spicy, earthy, herbal, and fairly sour Orientals takes a lead here. The dark Virginia offers tangy dark fruit, wood and earth as an important secondary player. The smoky, woody, earthy, musty sweet Cyprian Latakia competes with the dark Virginia for attention, and at times supersedes it a mite. The tart and tangy citrusy, lightly grassy yellow Virginia also provides a touch of spice in the background. In most all respects, it’s rather similar to the re-release version of Dunhill Durbar, except the Latakia. and especially the spice are a tad more obvious, and this is a slightly fuller smoke, so it doesn't quite have the balance that Durbar has. This blend is a little sweeter as well, which I attribute to the dark Virginias. The strength is just past the center of mild to medium, while the taste is medium. The nic-hit is almost at the center of mild to medium. Those last three attributes are similar to the Dunhill version. Won’t bite, or get harsh, and has no rough edges. Burns cool and clean at a reasonable pace with a very consistent, moderately sweet and lightly more spicy, savory flavor through out the experience. Leaves little dampness in the bowl, and requires an average number of relights. Has a pleasant, short lived after taste, and room note. Can be an all day smoke. I gave three to the Murray’s production, and the re-release. This gets three and a half stars.

The tobacco is mostly a medium-narrow ribbon cut of tan, brown and black leaf. There are a few "fish food" bits. It came ready to smoke and did not need time to dry. I am reviewing this on its own merits because I have no meaningful recollection of the STG version, and I have never had the Murray.

This is Oriantal forward with the slightly sweet Virginias and the latakia campfire in the background. There is a floral, incenselike quality to the Orientals at times, and they sometimes present as sour. This sounds like an odd combination of flavors, but it works well for a fan of Orientals. There was a somewhat creamy quality to the smoke especially in the last half of the bowl. All of this is hard to put into words, and I think that qualifies as complexity.

The tobacco took a match and burned as expected. It did not leave a damp heel.

This is easy to recommend if you like Balkans.

Another hit in the Heritage series! I have never smoked the old ('60s-'70s) version of Durbar, only the Murray-made early '00s one (and to be fair I haven't smoked it in the last 15 years). To my taste, the Dunhill/Murray version was OK, a very intense Balkan-like mixture: lots of Orientals, very spicy, and if I remember correctly also quite "heavy" (in body but also a bit in terms of nicotine) and with some rough edges, not to mention that I found that the latest batches were getting flatter in taste like all Dunhill blends at the time.

I am glad to report that Oriental Square is much similar to the "good" tins of Durbar that I had the pleasure to smoke. It has the same fullness of taste, the same spicy, smoky and even slightly sour/metallic note (the Orientals...), a bit of earthiness. It is a tad lighter than Durbar and it also seems slightly smoother, but by no means this means that it is less full in taste. If you want another comparison, think about something like GLPease Caravan with less finesse but more intensity.

Minor complaints? It has a touch of cigar-like bitterness (which gets more evident if by mistake you rush it or make it smoke wet due to excessive loading in the bowl), it doesn't have too much complexity or evolution (it's great but it starts wham-bang and goes on until the end).

Overall, though, a great blend and one that quite faithfully recreates at least some incarnations of the original.

The Balkanese sour and smokey (blue cheese!) tin note is similar to Trafalgar.

What a great discovery - thanks to member Beer whose insightful reviews of these McConnell Heritage blends motivated me to purchase many of them.

Oriental Square is on the mild side of medium or perhaps in the middle of mild and it's a tasty Balkan blend. There's just enough Latakia to make you want more. Orientals dominate resulting in a pleasant, slightly sharp blend. Burns fairly cool but watch your puffing cadence due to the mildness - you can absent-mindedly over draw causing heat trying to extract flavors. Nice burning aroma. Little nicotine. Maybe a smidgen of sweetness in the finish (but it's barely noticeable).

A top quality and expertly blended mixture. You might consider this a much more interesting version of Presbyterian Mixture without all the associated hype.

A nice mild-medium body balkan type blend . A Dunhill like ribbon cut . Reminds me of John Cottons Smyrna with less spice and a little more sweetness. My tin is about 3 yrs old though . Good sweet and sour creamy ,buttery and smokey smoothness. The Orientals lead here . The Latakia percentage is perfect for my taste on light to medium scale . The Virginias add a little fruit and grass and hay . A fine blend and enjoyed greatly!

It`s very strange tobacco. It`s not oriental, it`s more latakia mix for my opinion, oriental - just silent notes on the bottom of smoke. Not interested to buy or taste another time.

Now it calls Orient Square. An open tin's aroma is dressed leather, bog oak and a little bit of musk and good hay. The feeling is as if you entered the saddle room in the stable and breathed in the smell of saddles and harness. It is smoked very well and lightly, but the tobacco itself was a little dry, I suppose. A little sourness, a little hot pepper at the first couple of puffs. Latakia does not rush on you, but carefully adds tar to this bouquet, completing the association with a stable. The taste is quite balanced, dense, although not too strong. I'm not sure if you can call it a "Balkan mixture", for the "Balkans" there is clearly less latakia than usual. Plus, it's a little bit sweet, and the sweetness intensifies towards the end as you get the taste. The strength is average, in my opinion - but, with rare exceptions, I do not take tobacco stronger than four of five. My pipe smoked slowly, burns very evenly, no need to light up. In Peterson shape 69, half a pipe was smoked for about half an hour. The ash is minimal and the pipe was dry after smoking. Can was packed in 2019. I took 5 cans for the first time, just by guess - and it was right choice. I will take more.

No taste. Burns poorly. I don't know what this mess is, but it's not recommended at all. It is said to be a replacement for Durbar -- it is not!!!