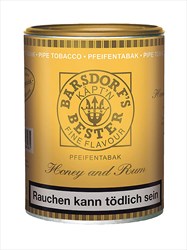 In the pipe tobacco mixture Käpt´n Barsdorf Bester Gold (formerly "Honey and Rum") a base of a high quantity of Virginia tobaccos are used. Refined with the aroma of rum and honey this affordable tobacco offers a great smoking experience.

Beginners tobacco, quite mild, mostly virginia flavours accompanied by light touch of honey. As for the rum part, there may be one but not really present during smoking. Suprisingly tobbaco straight out of the pouch smells plesently of rum, and little of honey. Room note doesn't bother non-smokers and was described as "faint tobbaco-like, but not intrusive". Cheap in Poland (about 8$) thus can be reccomended to begginers as quite good among other cheap tobbacos. Taste is much better when smoking in corncomb, sweetness of the pipe improves taste

This tobacco well known as a beginner's one. The harmony honey, rum, bright virginia and subtle burley....is excellent. The lightness is the most important point. Although, the maker has very long history, since 1770 in Germany, the product is quite fresh and "light".

Barsdorf's Kapt'n Bester Honey & Rum was my first and only pipe tobacco for the first year and a half or so of my slippery slope into the underworld of pipe smoking that has included such shady characters as Albert Einstein and Mark Twain. Both the pipe (Dr. Plumb) and the opened 250 gm tin of tobacco were gifts from an old-school chain smoker who found the demands of piping didn't suit his immediate and long-term smoking requirements. In hindsight the tobacco was already too dry when I began my trial and error experimentation with pipe smoking but didn't realize this until a new tin (Dunhill) of tobacco was purchased almost two years later and saw the contrast between fresh-moist and exposed-dry tobacco. No wonder the honey and rum never materialized on my taste buds except in one fleeting shooting comet moment towards the bottom of a bowl after following the quintessentially German "Frank Method". The fact that an expiring batch with its fleeting aromatics could still hold its own with a rookie smoker is a testament to the tobacco's tenacity and general quality. The flavor is mild, mildly fragrant and not sweet. The virginias would have sweetened some overtime, but since the casing must not have been very sweet in the first instance this is a blend that may appeal to those who like their meals to conclude with a dessert but not overtly sweet desserts. Come to think of it, this is a blend that should appeal to German tastes. One cannot refute in any language the Kapt'n's self-description, "Bester Honey & Rum ist ein leichter Tabak, in dem sonnengereifte Virginiablätter mit Honig- und Rum-Aromen veredelt wurden." Would give a 2.5 star rating but the site doesn't allow for half stars, so in good German fashion will round down rather than up.

My taste in tobacco is both 'wide & varied' Some day's I enjoy English,& other's something strong rich & spicy.So maybe I'm abit of an 'all rounder'in my taste's! Many yesr's ago in Australia I tried a Honey Blend & loved it.When I returned to the tobacconist to purchase more,it was no longer available.So recently I noticed Kapt'n Bester 'Honey & Rum' I decided to give it a try & after 3 day's I find myself Puffing Happily! This is even better than the original Honey Blend I once tried.If your looking for a mild tobacco that is 'NOT' sickly sweet 'give it a try' I don't find it overly cased,but I can taste both the Honey & Rum! I'm really enjoying the change of pace & fully intend to keep it around at all time's.Great for the beginner or when your in the mood for something different & very pleasant. In it's class I give it 4 star's.

Many years ago, on a hot summer vacation at the sea I needed some new tobacco experience. I knew that Cherry from the same factory was quite not bad (nowadays I would say it was bad), so I choosed Kapt'n Bester Honey & Rum.

It was disaster. Ugly taste, not even too sweet, but just ugly (like expired old fruit). So bad that I threw half of it's package.

It seems that the whiskey and rum tobaccos are not for me. It wasnt bad but neither was it good. Its amazing how different people have such varied tastes. It wasnt going anywhere but I will still use it up.

Skip this one - not worth even the 2 dollars a pack it costs here in Moscow.